Last Wednesday, students and staff at the faculty of Humanities protested the dire financial situation at their faculty. Not with banners and noise, but with a lecture marathon. Earlier this week, the police had fined protesters for drawing on the pavement with chalk.Read in Dutch

From 10 am onwards on Wednesday, teachers gave short lectures about the backgrounds of the cutbacks and other developments within and outside of the university. All of this was supplemented by other programmed acitivities, such as the ‘satirical jargon dictation test’, battle song karaoke, and a musical intermezzo performed by social scientist Ruud Abma.

Direct cause for the protest are the planned cutbacks at the faculty of the Humanities. Due to a deficit of two million euros, courses will be scrapped, some courses will have to make do with fewer contact hours, and the tutorate will be renewed. After the programme committees of nine study programmes sent a letter of “grave concern” to the faculty board, the protest group Zeg Nee. (Say No.) was founded.

The students aren’t just angry about this round of cutbacks, but mostly because it fits in with a longer ‘tradition’  of cutbacks and national underappreciation of the discipline. Earlier this month, students handed over a petition against the cutbacks to members of the government. The lecture marathon was the next step in their campaign. It attracted around 150 people.

A way of making noise
The turnout differed per lecture, says to co-organiser Nina van der Bent in the evening, when DUB stops by. “We wanted to ensure no teacher would be lecturing to an empty room, and we succeeded.” When asked why they chose this way of protesting, and not something that makes more actual noise, Van der Bent says: “This is a way of making noise, too. We show that people are really interested in this subject.”

To most students present it’s important to show they care about the cutbacks, by attending the lecture marathon. “Students have more power than they think,” says history student Floris Boudens. “Especially when they unite. Next year I’ll be a member of the University Council, and I’ll collaborate with Zeg Nee. to let the voice of the faculty be heard.”

Sitting still and listening for an entire day makes people hungry. That much becomes clear when the pizzas arrive. After professor Geert Buelens’ class about the 1968 student protest, everyone assembles around the pile of pizza boxes. “Humanities are underappreciated,” says history student Gerben Hospers, with a slice of pizza in his hand. “I’m not usually a protester, but I didn’t want to stay at home and wait. It’d be really bad if we get fewer contact hours. In the history programme, we already don’t have many.” 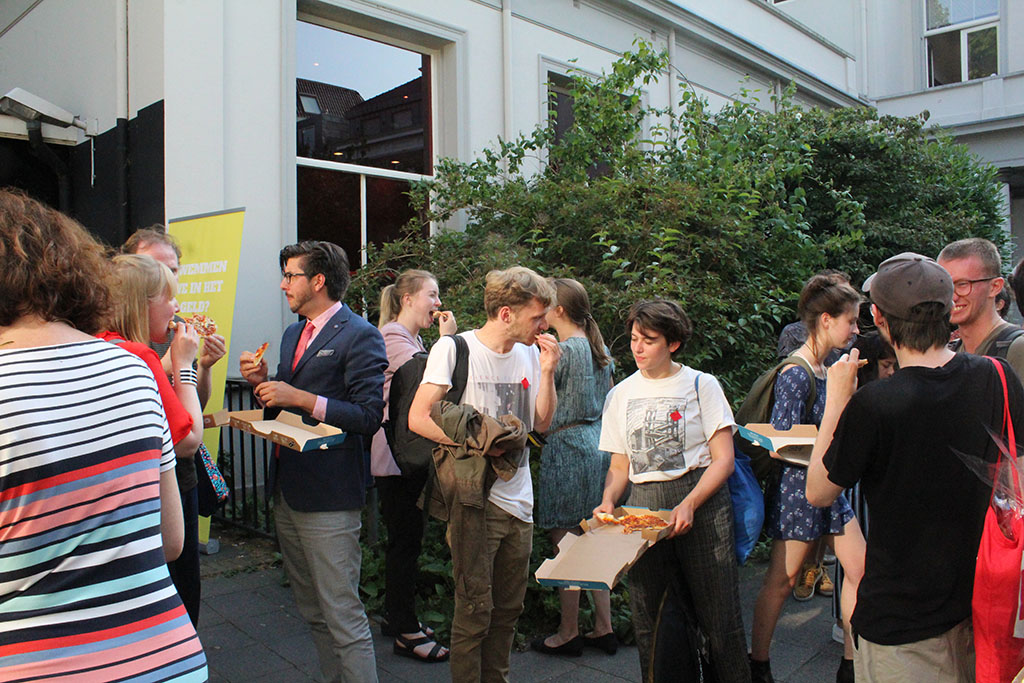 After the short dinner break, everyone’s quickly ushered inside for the next part of the programme. Distinguished professor Frits van Oostrom is interviewed by assistant professor Pieter Huistra. Van Oostrom points out the danger of too much negativism surrounding the humanities. “There are very few people who don’t care at all about art, literature, or music. So let’s not try to convince each other the opposite is true. As a whole, it’s really not that as bad as you may think.”

At the same time, the distinguished professor says it’s a good thing that students keep being vocal against the underappreciation of the humanities. He also sees an unbalance in the distribution of funds between separate disciplines. “And students are the ones who are in class. I’m never in any of my colleagues’ classes, so I don’t know much about it.”

University board should speak out
After the lectures, the next item on the programme was a battle song karaoke, with protest songs such as the Dutch classic ‘Over de muur’ by Klein Orkest. “Apparently, Anton Pijpers even sang along softly,” says Van der Bent afterwards. “I didn’t see it myself, though, I had my back to him.”

Chairman of the board Pijpers joined the end of the marathon to listen to the protesters. Van der Bent: “As Zeg Nee., we’ve said that we’d like Anton Pijpers, as chairman of the executive board, to speak out in the national media about getting more money for higher education.”

Earlier this week, Pijpers said in a university council meeting that he understood the Humanities protests, and acknowledged the issues mentioned. According to him, the universities are actively working on getting the diminished funds on the government’s agenda. He also wants to have a stronger voice of opposition now the technological universities’ lobby for more money seems to be paying off. “That must not be done at the expense of the humanities.”

Five student members, who had planned to leave the room when voting about a letter concerning the university’s financial plans, then decided to disregard their own plans. Council member Jonathan Steinebach says the students don’t so much struggle with those plans as with the fact that there’s not enough money to be distributed. Soon, students will no longer accept this, Steinebach says.

Whether or not more protests of humanities scholars are to follow, isn’t entirely clear yet. “If they are, they’ll be organised in collaboration with the national protest Woinactie,” says Van der Bent.

The humanities protests didn’t happen without any incident. Protest group Zeg Nee. decided to draw their logo on the pavement in front of the university at the Drift with chalk spray, with the lecture marathon date beneath it, which promptly resulted in four fines of 140 euros.

“We thought it was very peculiar, because there were pavement chalk drawings everywhere during the University Council elections, depicting the party logos,” Nina van der Bent says. “We showed the police officers that the chalk spray we used can be cleaned off easily with water. But the police said this wasn’t pavement chalk, but graffiti.”

The students are checking whether they can challenge the fine. They have the support of the SP party in the municipal council. “They also fined someone who wasn’t spraying, but was just holding a can.” Student union LSVb announced on Twitter they’re willing to pay for one of the fines.

On Facebook, the police says it wasn’t immediately clear whether the ‘paint-like substance’ could be removed with water, which led to the fines. For ‘regular’ pavement chalk, the police say, they don’t fine anyone.