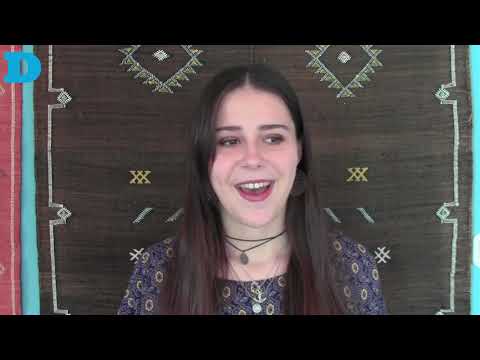 Who are the nominees for DUB Campus Columnist 2021

Lili Szarvas, a second-year Media & Culture student from Hungary, has won the title of Campus Columnist 2021. She will be writing in English every two weeks. The other winner, UCU student Sophie Hudson, will be writing biweekly for the Dutch page.

Unfortunately, DUB couldn't hold a reception to announce the winner of the Campus Columnist 2021 competition, as is customary. Instead, it had to do so in a busy online meeting held on Tuesday.

In his opening speech, DUB's Editor-in-chief Ries Agterberg emphasised the importance of portraying the university's human dimension in the articles published during the corona crisis. "It's no longer only about the university as an organisation, but rather -- and more and more frequently -- about the wellbeing of students and staff. It's about personal stories, such as lack of personal contact, combining the professional and private spheres, or the never-ending online meetings."

This eye for the personal dimension of the pandemic was also reflected in the entries DUB received for the Campus Columnist competition. One contestant wrote about watching a lecture from her bathtub, while another one chose to talk about how she got lost the first time she had a class on campus after the first lockdown.

The jury chose six finalists, three for the English page, and three for the Dutch page. They all introduced themselves in video interviews presented during the online meeting. You can watch the video about the international finalists above this article. The one about the Dutch finalists is below.

The international winner is...
Hungarian student Lili Szarvas will be the Campus Columnist for DUB's English page in 2021. The jury was impressed with the stylistic beauty with which she expressed the nearly philosophical question "Where is home in a pandemic?". Home is where your life is, she concludes, illustrating her thoughts by wondering when one feels the water's coldness the least when washing their face in the middle of the night.

Szarvas beat contestants Silvio Ruberto and Susanna Potestio. Ruberto is a Bachelor's student in History. He was selected as one of the finalists because of his column "Fashion and segregation", in which he observes that not all his classmates appreciate the Overvecht neighbourhood, where he lives. Even so, he notices that the fashion worn by international students has more in common with that of the youth of Overvecht than with the suit-and-tie looks traditionally paraded by Dutch students.

Susanna Potestio, an Italo-Austrian Master's student in the Sustainable Development programme, was the third finalist thanks to her column "Lockdown characters", in which she describes the different ways people cope with lockdown life.

The Dutch winner is...
Sophie Hudson was chosen by the jury as Campus Columnist 2021 for the Dutch page. A first-year student at University College Utrecht, her winning column "De kip" (The Chicken) presented humour with serious undertones. How do you survive as a freshman in a student house? When are you nagging and when are you someone who stands up for yourself? These questions become even more pressing during a pandemic.

Although the jury found Hudson's writing style a delight to read, the other Dutch finalists were also highly appreciated. Biology student Kees van de Sanden went for a rather original metaphor in his column "Vogelpolitiek" (Bird Politics): by wondering how the birds that live in the Utrecht Science Park are dealing with the pandemic, he addressed the eternal struggle between quantity and quality in the university.

The third and final finalist was Sam van de Weerd, Master's student Energy Science, who, according to the jury, does exactly what a columnist should do in his entry "Ik zal jullie niet verraden" (I Will Not Betray You), which observes that viruses play an important role in nature. Regardless of whether readers agree with his opinion about the coronavirus regulations, van de Weerd surely gets them thinking.

Jury
With a total of 42 submissions, this year's competition received more entries than the previous year. Six competitors were UU employees and nine were international students.