This week, a new mural from the Utrechtse Muurformules (Utrecht Mural Formulas) series has been unveiled in the city. It depicts UU physician Caroline Bleeker with her phase-contrast microscope. The mural graces a façade on Strosteeg street. She is the first female scientist featured in the series.

The art collective De Strakke Hand worked on the mural for about a week, finishing it last Monday, November 15. The initiative is part of the joint lustrum celebrations of Utrecht University and the University Medical Centre Utrecht. “The lustrum committee thought it would be a nice idea to donate something permanent to the city”, explains Sylvia den Hengst, UU's communication advisor.

The mural on Strosteeg is the fourth in the series. The first one depicts the Doppler Effect, discovered by professor Buys Ballot, and is located on Burgermeester Reigerstraat; the second one is about the Random Walk of professor Ornstein, located at Oosterkade; and the third one is about Stereochemistry, from professor Van ‘t Hoff, located at Ganzenmarkt. For the first time, a female scientist has been illustrated in the series.

Microscope
On the mural, physicist Caroline Bleeker is seen with the phase-contrast microscope produced in her optics factory, Nedoptifa, an acronym for Nederlandse Optiek- en Instrumentenfabriek (Dutch Optics and Instruments Factory). It is located on Thorbeckelaan Avenue, in Zeist. The factory, best known for the high quality of its instruments, became an even greater success thanks to the development of this microscope. Nedoptifa was the first company in the world to produced complete phase-contrast microscopes, which made it possible to see the internal structure of living cells. Previously, cells and systems were only visible by adding a colouring agent, which caused the cells to die.

The phase-contrast microscope was invented by professor Frits Zernike, who won a Nobel prize for it in 1953, and Nedoptifa is the company that brought the instrument to the market. In 1947, Caroline Bleeker and Frits Zernike were granted the patent on the microscope. “What makes it even more special”, explains Den Hengst, “is the fact that the phase-contrast microscope is still being used to this day in hospitals, companies, and universities. This perfectly matches our lustrum theme, '385 years of science in Utrecht: Creating Tomorrow Together’”. 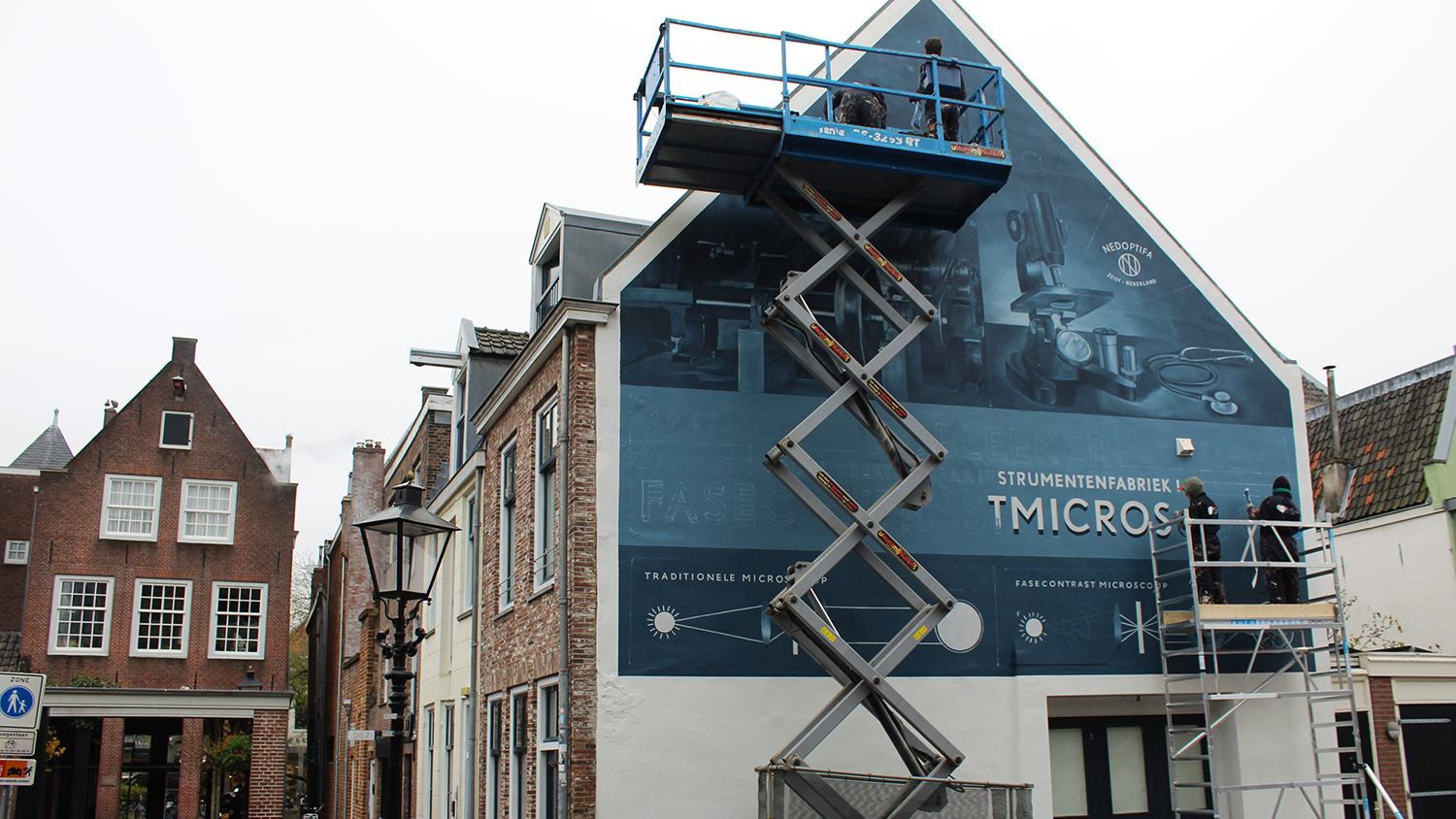 In 1930, Bleeker inaugurated a Physics Consultancy Bureau on Korte Nieuwstraat, within walking distance from the mural unveiled this week. There, she taught about the design, use and construction of scientific instruments. In the same year, she opened an instrument factory in Utrecht, producing scientific and optic devices. During the Second World War, Bleeker hid Jewish people in her factory, for which she was later granted a Royal Distinction. She launched Nedoptifa after the war, together with her partner Gerard Willemse.

At the factory, Bleeker enlisted male and female employees and the company magazine had a special section for women. Bleeker actively engaged in women’s emancipation. Her own company made her an independent entrepreneur, and she was a scientist when this was still unusual for women.

The Utrecht Mural Formulas are an initiative from Utrecht-based physicists Ingmar Swart and Sander Kempkes, aiming to give ground-breaking Utrecht scientific discoveries more publicity. But this is not the first time Bleeker is honoured in the city: a building is named after her in the Utrecht Science Park. It is the home base of Scientific Instrumentation of UU's Faculty of Science.
Tags: lustrum | natuurkunde | faculty of science