Board members (like rector Henk Kummeling, pictured) spoke with protesters at the Dom square. Photo: DUB

For the first time in a long while, there were once again plenty of activities in the University Hall and on the square in front of it, this past Monday. The day was divided into small, themed elements, in which the focus was on community building and meeting. This included the protests against workloads at the Dom square by students and teachers, who spoke with the board members.

Corona has caused the start of the academic year to be very different from previous years. No traditional procession of professors wearing their togas, no fully-packed Dom church with numerous guest speakers, and no drinks in the Pandhof, the Dom church garden, where administrators, teachers, and board members of study and student associations would usually welcome the new year with a drink.

However, the UU board chose no to do the entire day online either, with speakers talking to the academic community from behind a computer screen. “In the past few months, we’ve realised how important the community is. The extraordinary thing about the university is that we want to meet each other and exchange thoughts,” said rector Henk Kummeling in several sessions. For that reason, Monday was dedicated to meeting each other, with the theme of ‘the heart of the university’.

The meetings followed all the corona guidelines. A limited number of people were allowed to be present at the activities. Others could follow the day via livestream. At some points, people were heard saying that the university was proving itself to be ‘such a goody two-shoes’ by complying with all the rules. In the enormous auditorium, for instance, only 32 chairs stood at great distance from each other.

Accessibility for people outside the University Hall faced some issues in the morning, when the livestream refused to work. The issue was fixed before the afternoon sessions, and the recordings of the morning sessions were published online quickly.

WOinAction
As has been common for the past few years now, students and teachers used the start of the academic year to protest. At an early hour, a group of students was already camping out on the Dom square. They brought moulds and red spray chalk, and from the central point of the Dom square, started to spray chalk a route of red squares in the direction of Utrecht Science Park. The red squares were introduced last year by protest group WOinAction to combat the workloads among teachers and researchers.

“We organised this demonstration in a very short time, because as students, we want to voice our support for the teachers. They do so much, and have a structural lack of time. That’s not good for students either,” a protester said. People regularly talked to her while she worked on the chalk route. Often positive words, but some critical ones as well. “A former PhD candidate told me that working overtime is simply part of working in science. I tried to explain that that doesn’t work like that when there’s a structural lack of time.” 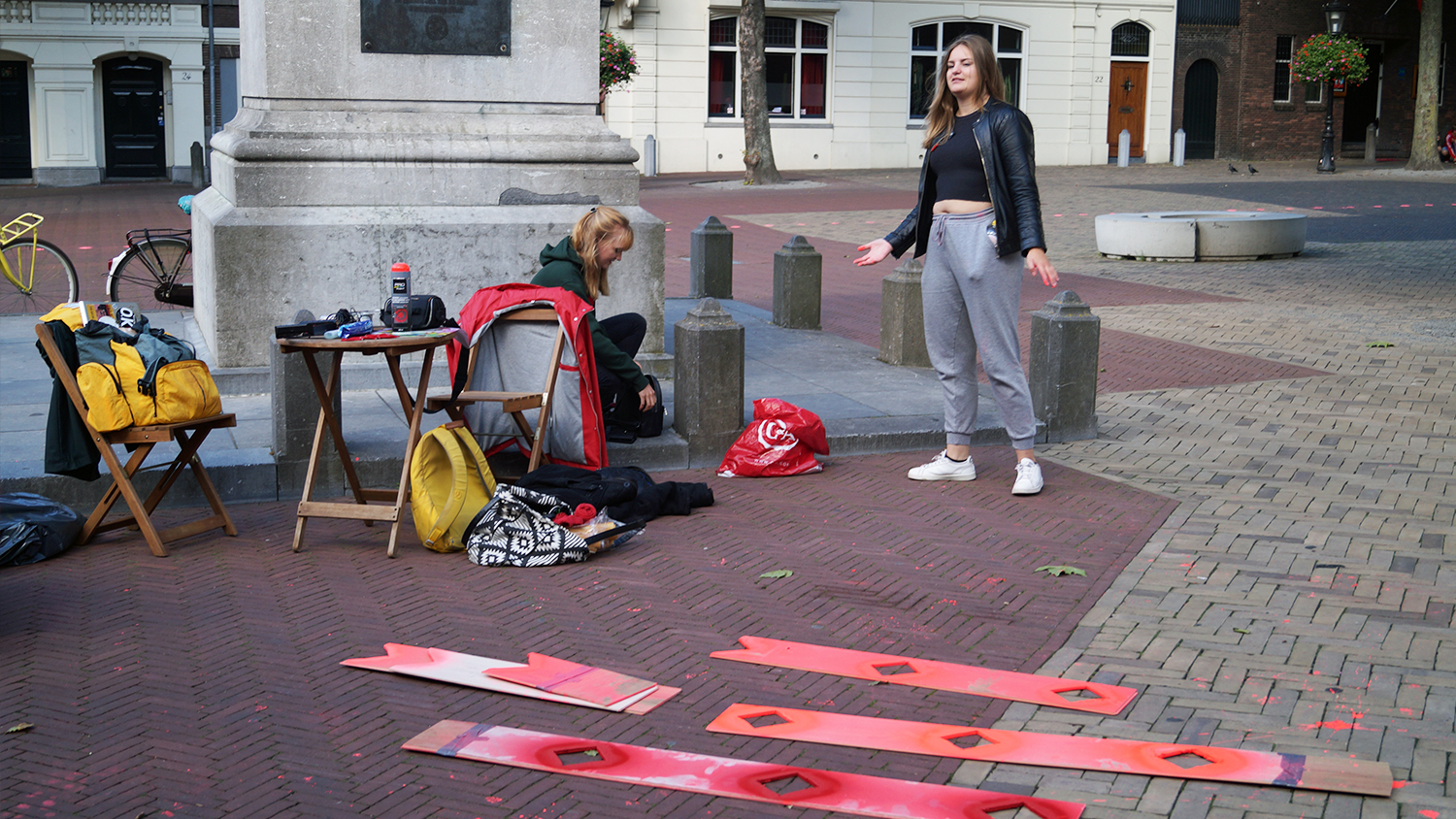 A little past 1pm, a vehicle from union FNV arrived to hand out sandwiches. The reason: a grup of teachers had cycled from the University of Amsterdam to the Dom square in Utrecht to attract more attention and force for their protest against high workloads. They were welcomed by loud applause from the students present. The complete Executive Board also came out in their togas to welcome the cyclists. “I share many of their objections,” said president Anton Pijpers. “But I’ve also said that simply spending more money isn’t the solution. We’ll have to see how we should organise things ourselves, as well.”

Awards
During the start of the academic year, some festivities were included that were originally supposed to be part of the Dies in March, which was cancelled as the lockdown had just started at the time.
The awards for Outstanding Teacher and Teacher Talent of the year took place on Monday instead. Gerda Andringa, teacher of Liberal Arts & Sciences at University College Roosevelt, and history teacher Lorena de Vita received their awards from the jury.

The student awards were also presented yesterday, as is traditionally done at the start of the academic year. The award for social merit was won by the students of DOMcast, a group of students who wish to make the city’s history available to a broader audience by creating a podcast. The award for best Master’s thesis was given to Marrit Woudwijk of Liberal Arts & Sciences, for her research on individual suffering of civilians in war zones where the Dutch military has been active. The professors who were present sat on the podium in their togas, ensuring that at least the ceremony ended with a miniature procession. 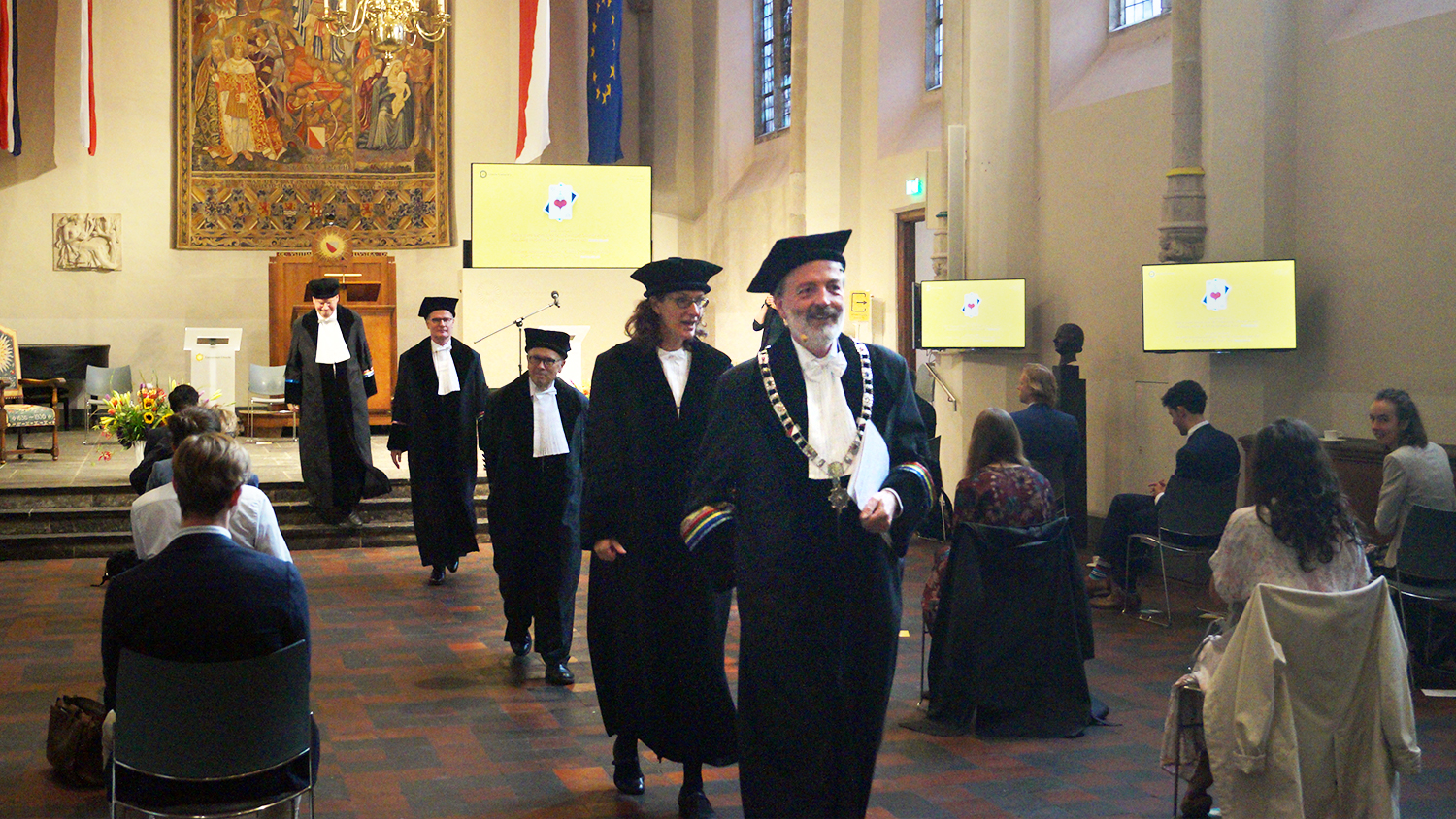 A new element to the start of the academic year was the Agnites Vrolik award. This award, worth 25,000 euros, went to oceanographer Erik van Sebille. Van Sebille develops software that models ocean currents and maps the route taken by plastic waste in the oceans. This helps him predict where plastic will wash ashore, and can best be cleaned up. The award was made possible by a bequest from alumna Coby van Bree, and was named after a PhD candidate from 1836 who later became minister for Finances as well as the first chairman of the University foundation.

Honorary doctorates
The ceremony also included presenting honorary doctorates; another aspect which had to be postponed from the cancelled Dies. Meetings with the professors receiving these honorary doctorates were held online, watched by numerous deans and professors in togas. Climate scientist Valerie Masson-Delmotte was unable to leave Paris. She sat at home, behind her desk, and – like magic – found the UU kappa behind her back at the exact right time after a laudation from honorary supervisor Roderik van de Wal, professor of physical geography. Masson Delmotte has a prominent role as researcher in the scientific advisory organ Intergovernmental Panel on Climate Change (IPCC). The IPCC is a leader in the cross-section of society and science, and provides a scientific foundation for world-wide climate policy. Professor of social pedagogy Hirokazu Yoshikawa had recruited his partner to hand him his kappa. He’s not an unfamiliar face in Utrecht: a while back, he visited the university as a guest speaker. As distinguished professor in New York, he researches the effectiveness of programmes dealing with immigration, early childhood development, and the reduction of inequality and poverty. Former US president Obama had appointed him as advisor on matters of education. He’s also received a request from presidential candidate Joe Biden to advise him on these matters. His honorary supervisor was Paul Leseman, professor of orthopedagogy.

Attention for support staff
A remarkable element from this afternoon was the CommUUnity activity. For this activity, a selection of around thirty UUers had been invited who’ve worked hard in these past months to keep the university going in times of corona. These included security staff, IT services, animal caretakers, and educational support staff. “You are the fabric of this university,” said Anton Pijpers. “Thanks to you, we as university were able to keep functioning. I appreciate that a lot.” Those present received flowers and a coupon for a dinner for two in the Botanical Gardens. 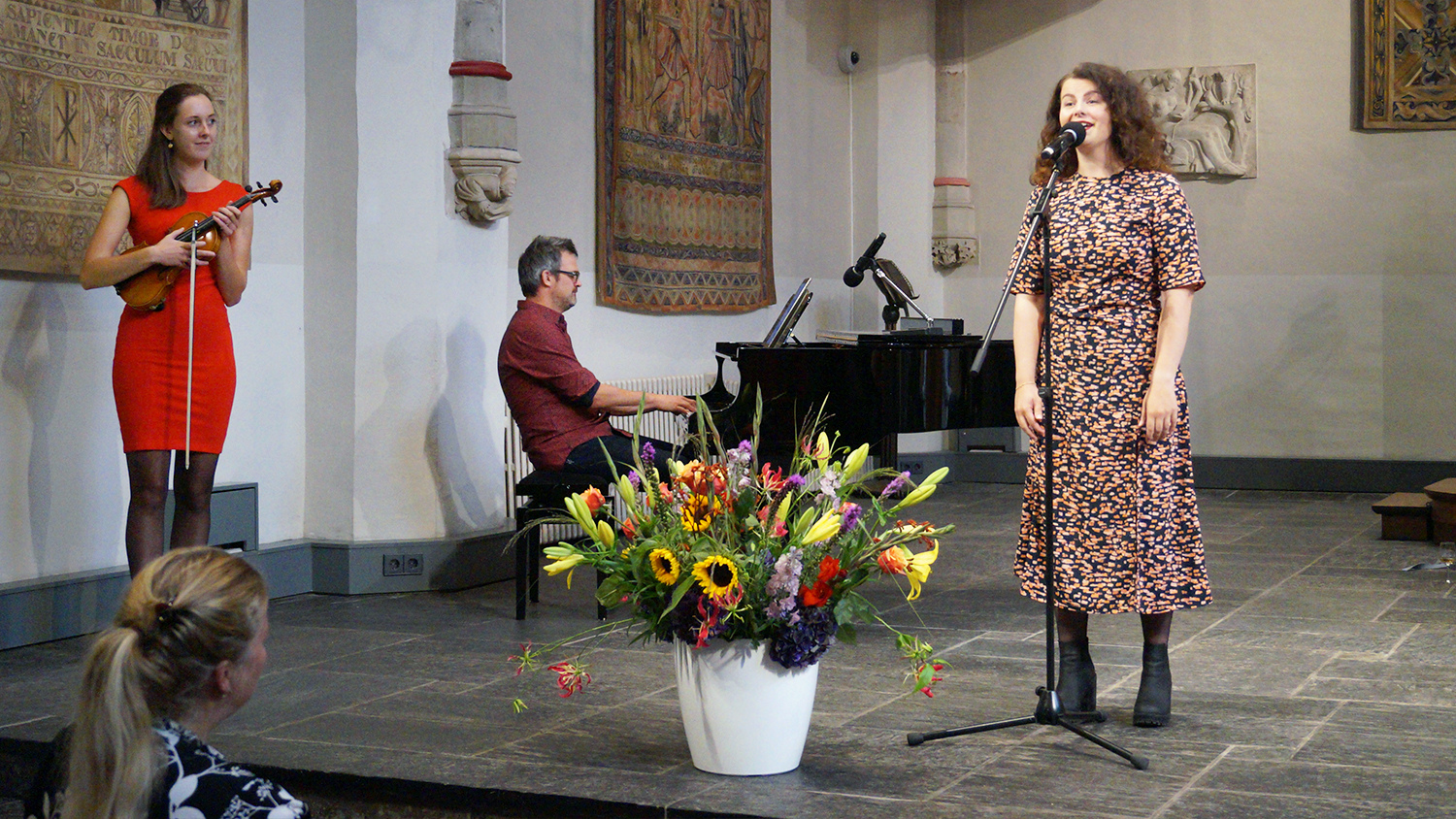 During this session, the new university song, written by Rosa Falkenburg, was performed live for the first time. Twice, even, because that’s what you do in a song competition with a clear winner, Anton Pijpers said. Afterwards, it was clear the song was well-liked by many people: “The melody stays in your head, and you quickly start to sing along to it,” said jury member and director of Parnassos, Marieke van Merriënboer. Rector Henk Kummeling, who’d initiated the competition, was satisfied with the result. “There was some scepticism beforehand, but I think it’s a beautiful song. It’s well-suited to academic ceremonies.” He hopes to never hear the Io Vivat again. Earlier that afternoon, to his great disgust, it had been played on the organ at the end of the ceremony for honorary doctorates.

Dessert in TivoliVredenburg
This remarkable start of the academic year saw its day come to a close in TivoliVredenburg. Feike Sijbesma, former top executive at DSM, (until recently) corona ambassador to the government, and elected alumnus of the year three years ago, was interviewed – College Tour style – by Erwin Maas from Studium Generale and (male only) students. The Pandora hall had been turned into a lounge room, with sofas and comfortable chairs, seating about thirty students. They asked Sijbesma how, as leader of DSM, he’d broken the power of stockholders, and why he’d chosen a sustainable course for the company.

Sijbesma thinks corporations have a responsibility to not just make money, but also contribute to a better world. He also sees a role for the university in the societal debate. He told students not to choose study programmes that can get you a job now. “I’ve been told that in 25 years, you’ll be doing jobs that don’t even exist right now.” He told the students to have fun, work hard, and choose the study programme you feel the most enthusiasm for. 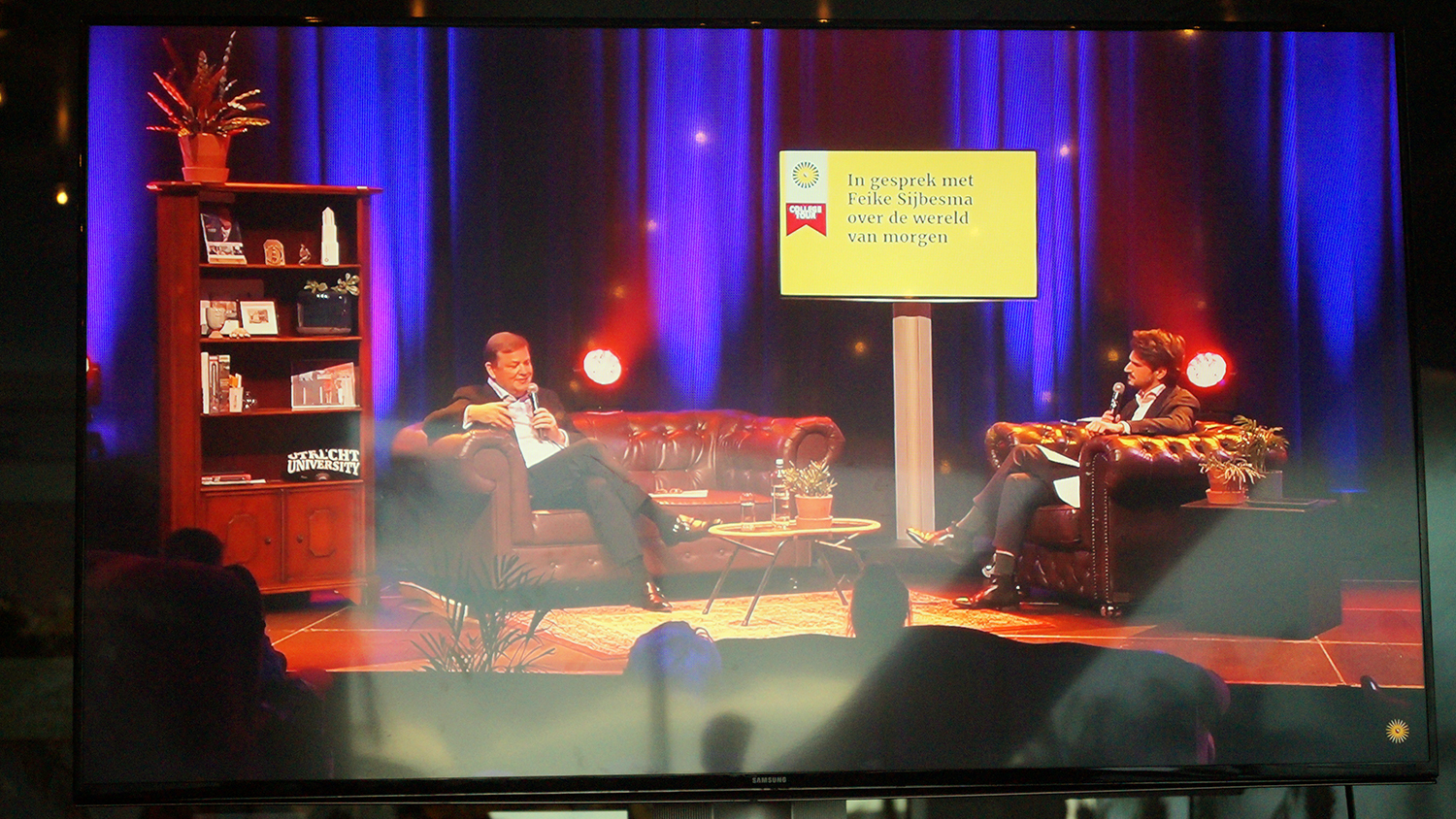 Lastly, the day ended the way we’re used to with the start of the academic year: with drinks. Not with everyone, but with a select group of students (including the university council members and association SIB), administrators, and UU employees. Anton Pijpers reflects with satisfaction: “We wanted meetings, and we had them. We paid attention to students, teachers, and support staff.” It’s typical for what the board wants to achieve this academic year: online where necessary, true contact where possible.