An analysis of the relation between government and higher education, a reflection on how to mobilise people, an explanation of efficiency, and a description of ‘protest carnival’ in the sixteenth century. They’re examples of the ‘mini lectures’ held last Thursday by scientists for WOinActie, on the sidewalk in front of University Hall, as a protest against cutbacks in higher education.

The conditions at the Dom square were ideal for an afternoon of binge watching top researchers’ mini lectures. Around one hundred students and employees, many wearing red squares pinned on their clothes, sat in the sunshine to listen. In the background, dressed-up students passed by as they came to University Hall with their families to pick up their diplomas. A handful of professors, there for a PhD ceremony, were seen giving the group a thumbs up from the reception of room 1636.

The lectures were planned for the national action week organised by the group WOinActie. “They’re meant to show that for us, the limit’s been reached,” says initiator and Ethics professor Ingrid Robeyns. “We’re structurally receiving too few funds from the government to provide high-quality education and research.”

Although other cities held regular classes in the open air, Utrecht chose to organise a series of mini lectures that were linked to the protest’s theme. James Kennedy, dean of University College Utrecht, starts with an analysis of the relation between government and higher education. What are the duties of the government concerning higher education, and what can we expect of the universities themselves? It was a solid, nuanced story.

The same could be said about nearly all the mini lectures. We didn’t hear any strong union language featuring hard demands, but interesting reflections. Only co-initiator Ido de Haan, professor of History, used sharp words. “We’re being screwed,” the professor says. “It’s nonsense to say we should all be excellent. For excellence, you can go to Harvard. We’re simply adequate.” After which he promptly introduces the next speaker as ‘top researcher’. 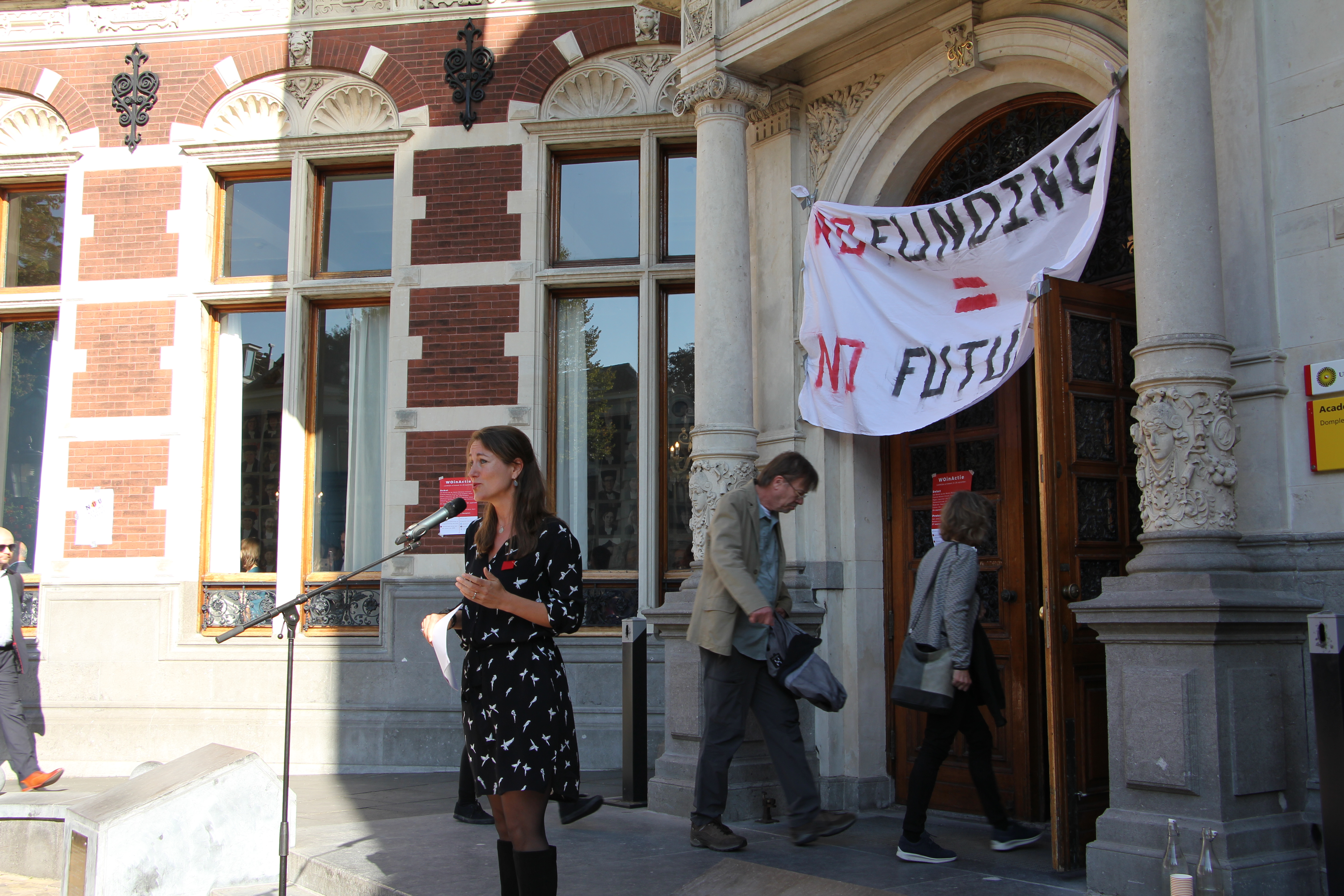 Belle Derks, professor of Organisation Psychology, talks about her recent research on burnout and workload. The research shows workload among scientists is high. But, on the other side of the workloads, there are also resources – things that make the work easier, such as a human supervisor, a stimulating work environment, additional facilities, or good employment services. The better the resources, the less far-reaching the stress, the more impassioned the employee. And this isn’t limited to scientists, but applies to students as well.

Philosopher Joel Andersom describes the term ‘doelmatigheid’, or efficiency. Efficiency itself isn’t necessarily bad, he explains, but you need to look beyond the numbers. You need to pay attention to themes such as contentment, or the use for society in the long run. That makes a concept such as efficiency easier to quantify.

French literary researcher Kate Lavéant lectured about a sixteenth-century protest carnival. What’s the point of such a protest, and how do those in power respond to it? The link to the scientists’ protest was obvious. Professor of Modern Literature Geert Buelens compared the present-day complaints in higher education to the student protests of the 1960’s in cities like Paris, Amsterdam, and Leuven.

Jolle Demmers, co-founder of the Centre for Conflict Studies, studied under which conditions you can mobilise dissatisfied people. “You need to identify wth the problem, you need to feel pain, or think you’ll suffer under the measures.” She’s testing how willing the students are to take action. 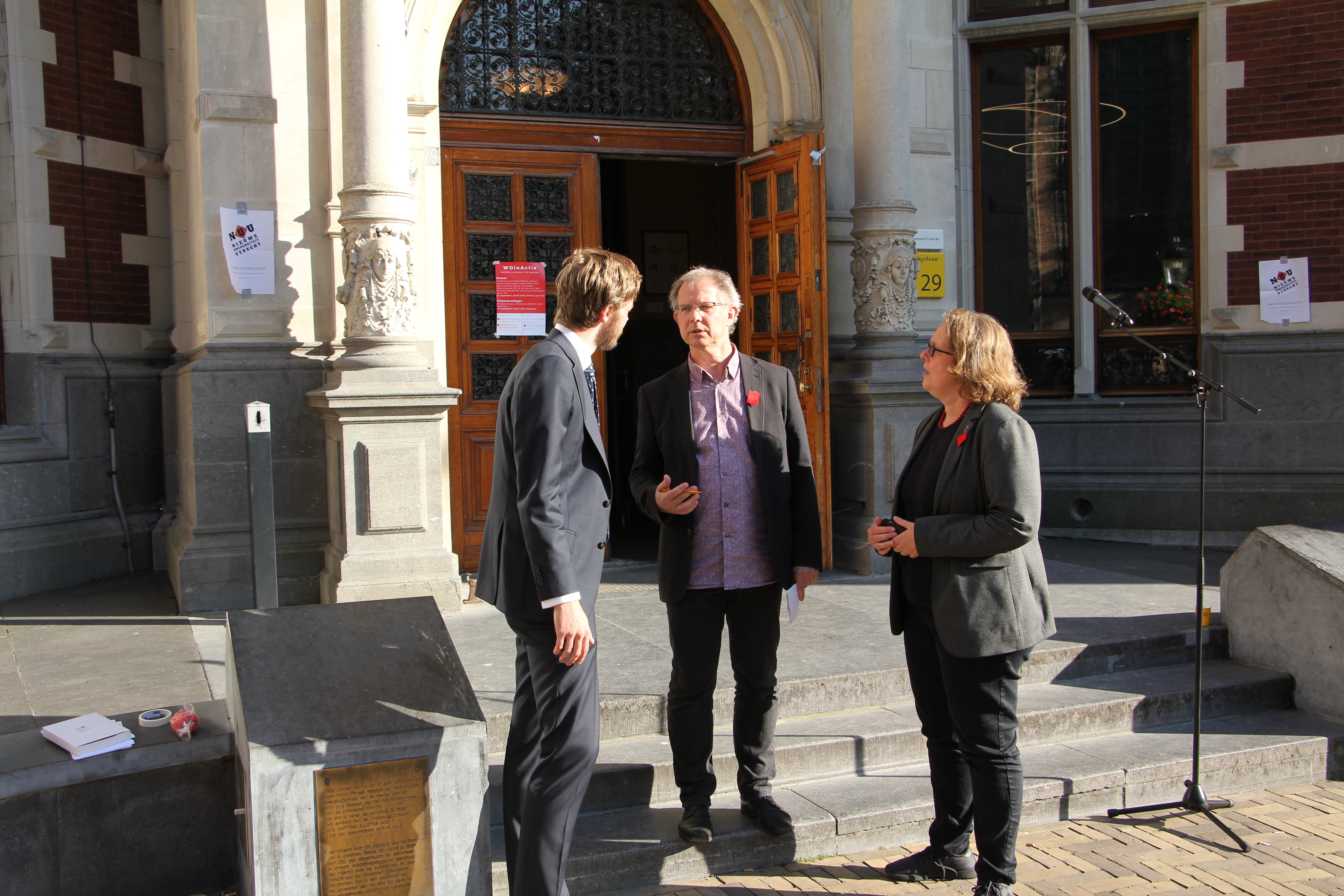 And that brings us to the sore point of the afternoon. Despite all the cutbacks on student grants and education, students don’t seem very willing to join the protests. University Council member Floris Boudens acknowledged the same at the end of the meeting, referring to his opinion piece (in Dutch ed.) published earlier on DUB.

The question for the teachers is how they can make the urgency of the issue clearer in the future. Ido de Haan announced WOinActie’s plans to decide on further actions. He can’t guarantee they will remain as nuanced, playful and friendly to the public as they have been so far.

In a debate held during the kick-off for the action week, the UU’s Executive Board had already announced their support for the protest demands. This week saw an addition in the form of a video from the chairman with his endorsement.