Students demonstrate against non-consensual sex: ‘Consent can be sexy’

Although the new legislative proposal about non-consensual sex won’t be discussed in parliament until after the summer, students – under the guidance of Amnesty Netherlands – are already demonstrating to strengthen the proposed legislation. They’ve launched the campaign slogan #LetsTalkAboutYES to that end.

Activists campaigned against sexual violence last week in Utrecht, with actions like sidewalk chalk at the Janskerkhof and distributing stickers and condoms. The cause for the demonstrations is a legislative proposal from minister Grapperhaus. He wants to include ‘sex against one’s will’ as a new crime in the law, with half of the penalty for rape.

The current law states that rape has taken place when it’s proven that violence has been used, or someone was forced to have sex. Force or violence can’t be proven with many victims, for instance because they were drugged, froze up, or didn’t (dare to) object. For that reason, the activists wish to adjust the legislative proposal: non-consensual sex should also be seen as rape, with a similar penalty.

Consent
For the activists, the emphasis in the current campaign is about starting a conversation about consent. “The goal is to initiate conversation, and to discuss ‘yes’, not just: no means no,” says Koen Hoogendoorn on the Amnesty website. Koen is leader of the activists and UU student. He’s studied the Bachelor’s of Law and History, and will start his Master’s in Conflict Studies and Human Rights in September. 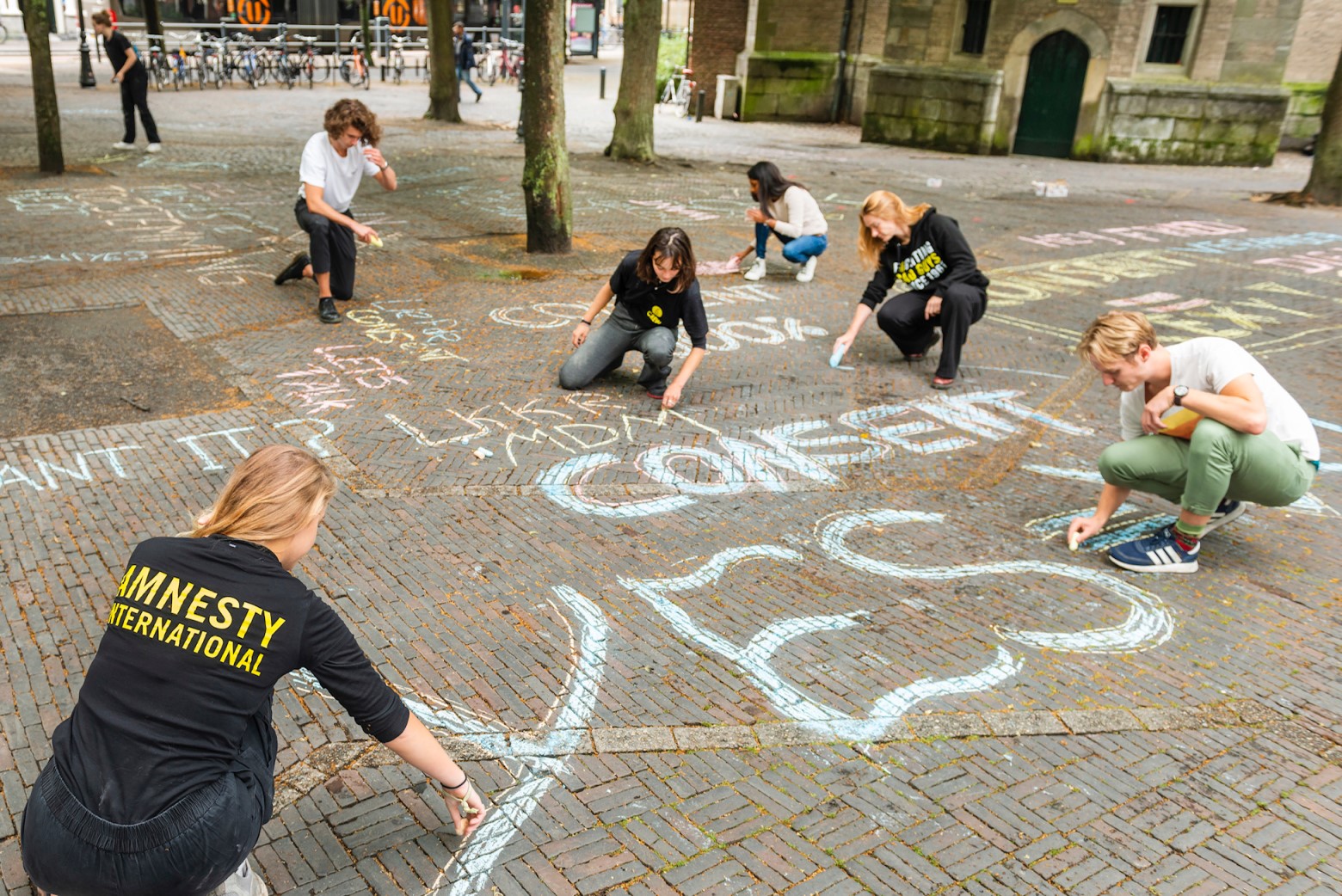 He was recruited by Amnesty as activist leader after he attended an online conference about the legislative proposal. He, in turn, recruited eight others. “I mainly chose students who are involved politically and socially, and are also active in Utrecht student life. Together, we’ve got a much bigger network.”

Kelly Tijhuis, an activist in his team, ended up in the FunX podcast on Saturday to talk about the campaign. Kelly is a student of the premaster programme of Anthropology at the UU. “It’s great to see how we can combine our online connections in this unique era of corona, and use it to reach as many people as possible,” Hoogendoorn says.

Student life
Although a large part of the campaign takes place online because of the coronavirus, there was also some real-life activity last week, like the sidewalk chalk action at the Janskerkhof, and distributing stickers and condoms with a print on them. The slogan ‘Yes I want you. Do you want me?’ was created by Koen. “This way, people come into contact with thinking about consent in a positive way. Consent can actually be very liberating and positive, instead of uncomfortable.” The printed condoms were also delivered to the mailboxes of several student houses.

For a large part, the action is aimed at student associations, sports clubs, and study associations. “The goal is to have associations creating a safe environment where members can come forward if they experience something they don’t feel comfortable with. Many associations have a counsellor, for example, so we’re asking associations to remind their members that this counsellor exists. We also want associations to organise discussion evenings, for instance,” Hoogendoorn says.

University Council member Ashley van Driel supports the activists. “In my opinion, consent is a topic that is very relevant in student life. Students live by themselves, get to know new people, make friends, and experiment with love and sex. You should be able to look back at your student life with fondness: you should be able to laugh at the silly things you’ve done, but it’s incredibly important that these memories, these moments, were safe. That you learnt how to say no, that that’s okay, and that you learnt to listen and to actively ask for consent. Consent can be very sexy, too.” 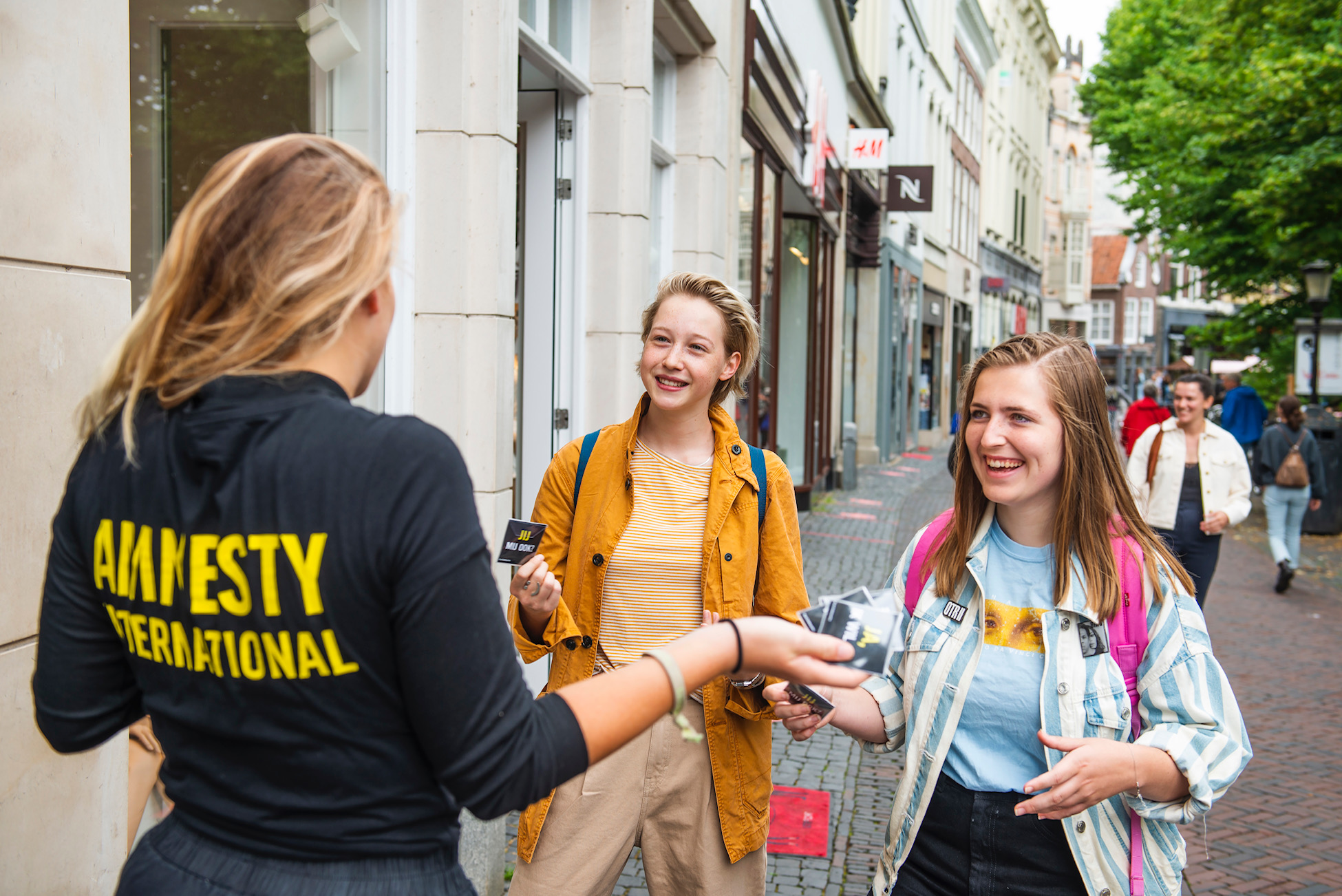