Students protest to defend 'their' Amelisweerd

“Go away with that motorway," “Withdraw that saw,” “No asphalt in Amelisweerd!” These were some of the battle cries heard on Thursday, October 14, in the protest march from Dom square to the Amelisweerd forest, near the Utrecht Science Park. The protesters oppose the government&#39;s plans of getting rid of 60 hectares of forest (some 800 trees) to expand motorway A27.

At around 1:00 pm, protesters began to fill the Dom square. The march was organised by Students for Amelisweed (SvA in the Dutch acronym), which is part of the protest group Amelisweerd Niet Geasfalteerd (No Asphalt in Amelisweerd), but the group gathering by the Dom tower was actually diverse. The students were supported by citizens who had already protested the making of the motorway in question, in the 1970s and 1980s. There were also many children in the protest. 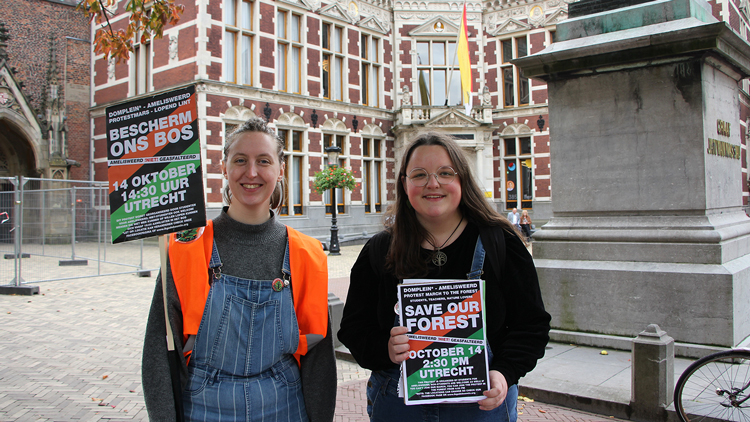 Utrecht-based band Buddy & The Maestro played live, followed by speeches in defense of Amelisweerd. Organiser Merel de Koning (on the left in the picture above), a student of the Literature Today Master's programme, kicked off the protest. Her speech evidenced all her frustration and disappointment about the Tracébesluit, the document in which the Dutch government details its plans to expand the motorway. She simply doesn't understand their reasoning: "this demonstrates that the government does not take the climate crisis seriously."

In her view, the Dutch cabinet must listen to the experts, who have shown that such an expansion will only attract more cars to the motorway, rendering the expansion works useless in the end. She also cites caregivers who wonder if the risks to public health have been sufficiently investigated. The expansion of the motorway would increase the amount of particular matter in the air, which can cause heart, vascular, and lung diseases. Merel also tells DUB that she's worried about endangered species, who should be left alone.

SvA's hopes are in the hands of Sigrid Kaag, leader of political party D66, which won a considerable number of seats in the national elections held earlier this year. This means that they have a lot of say in the process of forming a new cabinet. "We want Kaag to be firm during the formation process, keeping her promises about Amelisweerd."

"As the leader of D66, my heart beats for nature. As a child of Zeist, my heart beats for the region. That's why I am against expanding the A27 motorway, near Amelisweerd. For those who have questions about this subject, I will be talking about it in the next debate," Kaag tweeted on March 15.

Jos Kloppenborg also made a speech that day. In 1982, when he was still a student, Kloppenburg was part of protest group Vrienden van Amelisweerd (Amelisweerd's Friends), which organised an occupation of the woods. Today, he is trying to stop the expansion of the motorway in court. The last one to speak was Julia Spanier, sustainability researcher at Utrecht University, for whom it's absurd that the government thinks it can compensate for the damage of felling the trees by planting new trees elsewhere. "A nature reserve is connected to its location, it is a web of mutual dependence, a unique ecological network of plants, animals, and people. "Only the Amelisweerd forest is the Amelisweerd forest," she explains, stressing that nature shouldn't always give way to humans. 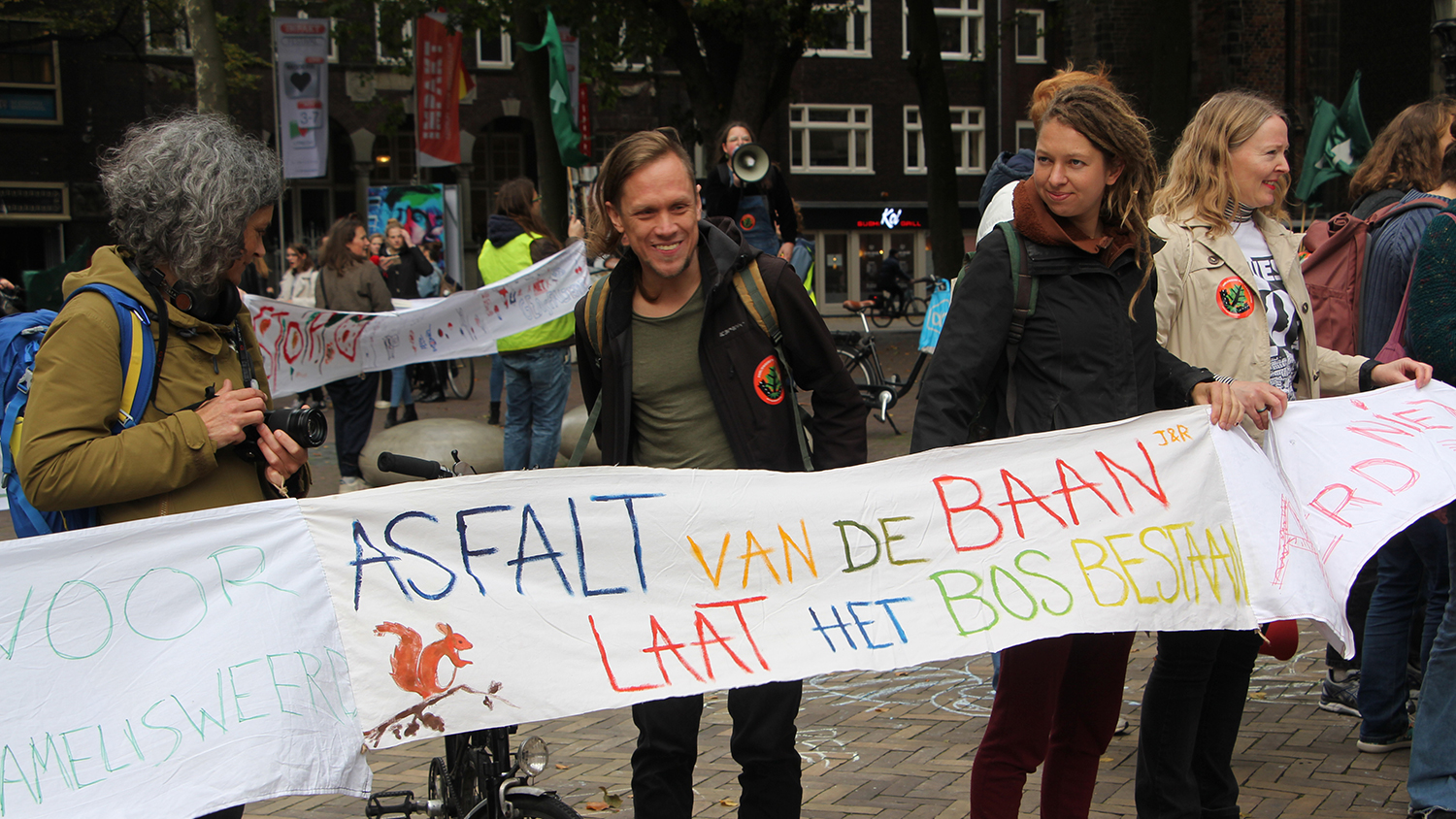 After her speech, the protesters marched away carrying banners, most of them from earlier protests. According to the organisers, approximately 150 people attended the event. Leah, Bachelor's student of Global Sustainability Science, was one of them. She tells us that Amelisweerd is her happy place, a place she feels deeply connected to. In her view, the Netherlands has already destroyed too much of its nature, so felling yet another forest is totally irrational and uncalled for. Besides, the government should carefully examine whether the advantages of expanding the motorway really outweigh the disadvantages of cutting down the trees in the long run. Annelies, Bachelor's student of Mathematics & Science, argues that Utrecht would lose a little bit of its identity by destroying yet another part of Amelisweerd.

Other students argue that the solution to the frequent traffic jams on the A27 motorway lies elsewhere. They propose, for example, to dedicate more time and attention to public transport, the bike infrastructure, and the possibility of letting people (continue to) work from home more often. It is perhaps no coincidence that most protesters rarely, if ever, use cars as a means of transport. Lianne, Bachelor's student of Artificial Intelligence, thinks that drivers should pay more taxes if they use their car in the rush hour. That way, they would be disencouraged to go to work by car. She also finds it ridiculous that politicians from The Hague can make decisions about Amelisweerd, even though both the province and the municipality of Utrecht are against the idea of felling the trees. Other protesters declare that it is simply unacceptable that the plans to expand the A27 motorway are still on the table despite all the voices against it, and wonder when the Dutch government will stop destroying the country's nature. 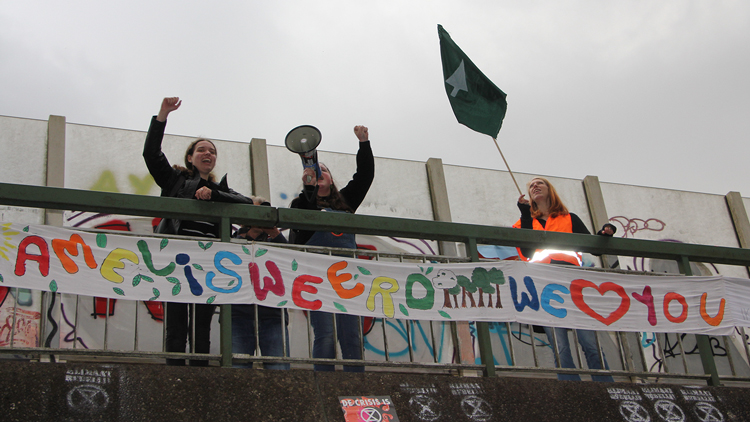 After a one-hour walk, they finally reach Weide Ter Vermaeck, near the Rhijnauwen tea house, where soup is served and information booths await. Another Utrecht-based band, Neef, who has a song dedicated to Amelisweerd, performs live. The last speech of the day is made by Anneke Wensing from SvA.

The students' desperation was palpable throughout the entire protest. Lianne Suurenbroek, Master's Student in the Cancer, Stem Cells & Developmental Biology programme, also a spokesperson for SvA, tells DUB that many protesters are willing to go above and beyond to keep the expansion of the motorway from happening. A tree guard organised by SvA is already monitoring the woods daily to make sure none of them is cut down to make way for the road. The initiative echoes the protests of 1982, when the same was done while the lawsuit against the creation of the motorway was underway. Today's students are even willing to protect the trees with their own bodies, if need be. "We want to show the government that they can take a hike with that ridiculous plan of theirs. It's not the forest that has to be destroyed, it's the Tracébesluit," says Merel. If they bring in their bulldozers, then the protesters are going to climb the trees to try and keep them from being felled. This initiative would be organised by Amelisweerd Niet Geasfalteerd.

But Merel hopes that none of that is going to be necessary. She would like the nature reserve to be kept as it is, as they all "love these woods very much."