Utrecht’s student homes are participating in the ‘National paving stone popping championship’ – a campaign that encourages people to replace (‘pop’) paving stones with plants. The goal is to make the city greener. Student housing corporation SSH has even allocated a budget for tenants to create a small garden in front of their homes&#39; façade. Student house Huize Parkstraat was more than willing to complete the task. “It was so much fun, and I even made some friends.”

Extreme weather is set to become more and more common because of climate change. For the Netherlands, that means more heat waves and floods, especially in big cities with a lot of paving, as stones retain heat and pavements don't allow the water to penetrate the soil. But we can still fight back. One thing we can do is make our cities greener, and that's exactly what the Paving Stone Removal Championship (in Dutch: NK Tegelwippen) encourages. The idea is simple: pop some paving stones out of the pavement in front of your home and turn it into a ‘façade garden’.

Many cities are participating in this national movement. The municipality of Utrecht, for instance, is facilitating the use of cargo bikes and trailers to transport the paving stones. You can even get potting soil in exchange for the stones. The municipality where people ‘pop’ the most stones will win the championship. At the time of this article’s publication, Utrecht was ranked #52 – so there’s quite some work left to do.

Budget for SSH residents
SSH, which owns hundreds of buidings dedicated to student housing in Utrecht, is also participating in the championship by providing their tenants with 75 euros to make their façade garden. "This is good for the climate, for drainage, and to keep the city green and liveable. But we’re also participating for the sake of our tenants, as this is a great opportunity to contribute to a more colourful, greener environment.” Before popping paving stones, residents must check whether their home is suitable for the project. Luijten: “If there’s only a narrow sidewalk in front of the house, there probably isn’t enough space for a façade garden. Not all plants are suitable for a façade garden, either. Some types of vine can be harmful to the façade or the pavement. Many students’ first idea is to plant a vine, but that’s not suitable at all.” Seven student houses have made use of the budget so far.

Huize Parkstraat gets a façade garden
Master's student Anne Pols (24) lives in a student house that has made use of the SSH budget to make its own façade garden. She lives on Parkstraat, in Utrecht.

1. Why did you decide to participate?
“We already had a nice backyard, which bloomed beautifully in the spring, after we planted a lot of new things last year. That’s when I found out that I really enjoy gardening. These past couple of months, I've been having my hands in the dirt at least a few times a week. When I read the SSH e-mail about paving stone popping, I thought it would be a great project for the summer holidays. My roommates thought it was a fun idea, too, so I signed up.”

2. How did you go about it?
“I did most of the work myself. I borrowed a cargo bike from the municipality to transport the sand to the waste disposal centre. Most of the stones were reused to make a border for the façade garden. I bought plants at the garden centre, together with a friend who had a car and also needed some plants. I needed quite a lot of plants for the garden, so a car was really useful.”

3. Was it a lot of work?
“It was quite heavy, because you need to dig 30 cm deep. That’s the heaviest job, all the digging. The ride on that huge cargo bike, with all the sand, was tough, too. But all in all, it was doable! It was very satisfying work, and I even made friends with the guys working at the waste disposal centre. I had to wait to get my deposit for the cargo bike back, and in the meantime, I started talking with an employee of the waste disposal centre. We had some deep conversations about feelings, spirituality, politics, philosophy, children, and our lives. So the heavy work was absolutely worth it!”

4. What kind of plants did you buy, and why?
“We planted some yellow and red coneflowers, lavender, autumn asters, geraniums/stork’s bill, and small scabious. We chose plants that attract butterflies and bees, don’t require a lot of work, and can handle direct sunlight.”

5. Was the budget enough?
“SSH's budget of 75 euros is more than enough! But it also depends on how large your garden will be. If I had made it bigger, then 75 euros would have been a tight budget. But then I would have just bought cheaper plants.”

The photos below show the process of creating the façade garden 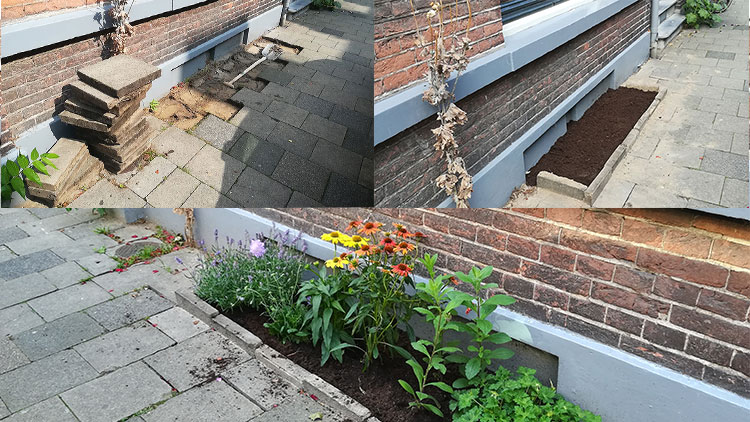 Want to read more about the paving stone popping championship? Click here for more information or to sign up. You can sign up until September 30, 2021, as long as there’s budget left.