In response to nuisance complaints and societal change, the university aims to tighten up its smoking policy. Photo: DUB

Utrecht University is developing a smoking policy for the entire organisation, looking at the current policies of UMC Utrecht (which has adopted a total ban on smoking) and the new smoking areas at the faculty of Veterinary Medicine for inspiration. An effective smoking policy comes with its own assortment of issues. “If the weather’s bad, I’m not going to smoke here.”

An important question when developing smoking policies is how strict the university wants to be towards smokers. That point remains unclear, says UU spokesperson Maarten Post. The Facilities Service Centre (FSC) will conduct its own thorough research first, he says. “We’re currently cataloguing the sharpened policies at other organisations, how they handled this, and what the experiences are. There are several options, varying from a total ban on university grounds, to facilitating smoking in assigned areas. You want to think things through and discuss the practical consequences.” The university expects to be able to present a concrete policy sometime in 2019.

Undesirable consequences
The consequences of a new smoking policy become clear when looking at the new UMC Utrecht policy. The entire grounds will be smoke-free this October, but smokers are already being sent away from the main entrance. They meekly strut over to the embankment, or to the bus stop in front of the hospital, where they light their cigarettes in the midst of waiting patients and employees. “This is a public area, so it’s allowed here,” a smoker explains. The Wilhelmina Children’s Hospital (WKZ) also banned the cigarette in May. All smoking areas were removed, and the grounds surrounding the hospital are now entirely smoke-free. 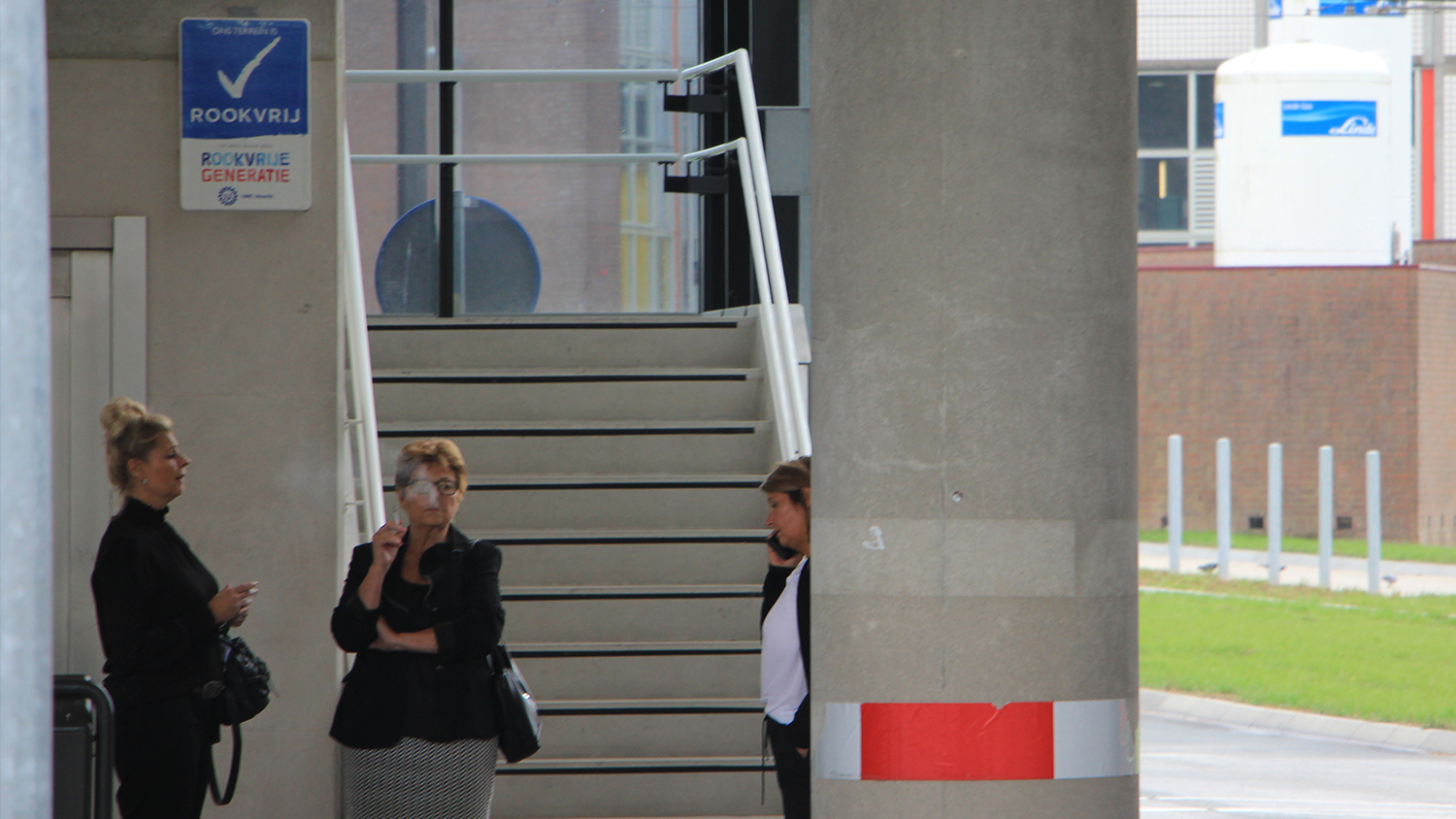 Because smoking is no longer allowed near UMC Utrecht, smokers turn to the bus stop instead. Photo: DUB

There’s no single smoking policy for De Uithof yet, although some measures have already been taken. Aside from the smoking ban at the UMC and the WKZ, students at some HU buildings are only allowed to smoke behind a certain line, and employees at the Administration Building have to keep seven meters distance from the building when smoking. At several other buildings, the ash trays are still prominently placed right next to the entrances.

Since last Monday, smokers at the faculty of Veterinary Medicine have to divert to designated smoking areas. “With this new policy, we’re hoping to limit the trash, stench, and health risks that smoking brings with it. Additionally, smoking is allowed in fewer and fewer public spaces, and our policy fits in with this trend,” says faculty spokesperson Josien Jacobs. A total ban like the one at the UMC Utrecht won’t happen anytime soon, she says. “Many of the people here are our patients’ owners. They often visit the faculty in stressful times, because their pets need medical care. For some, smoking offers stress relief. That’s why we chose to create several demarcated smoking areas.” 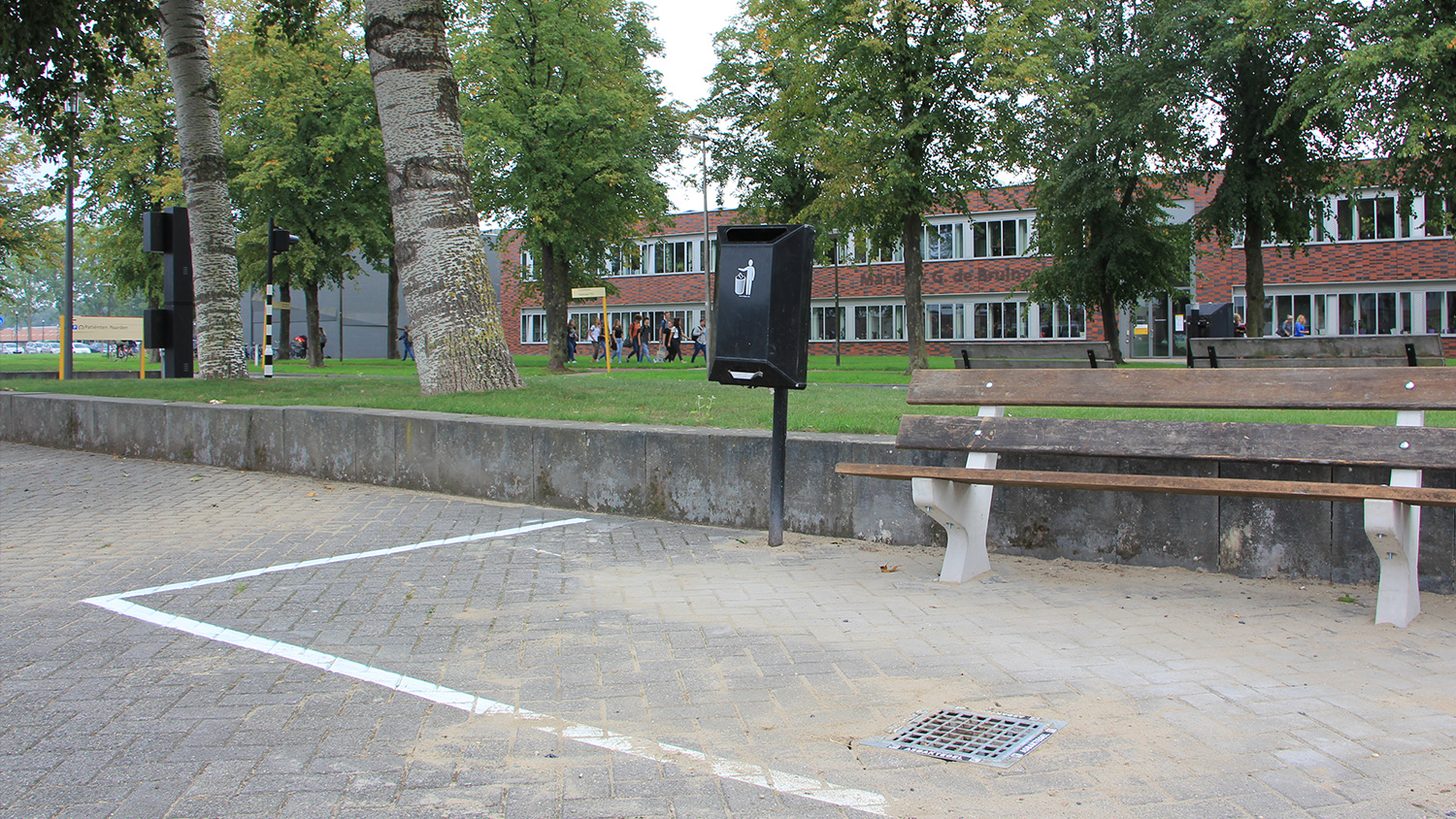 Most smoking areas at the Faculty of Veterinary Medicine are not roofed. Photo: DUB

“It’s like a penalty box,” mutters an employee at the pet clinic. He lights his cigarette, dutifully standing in between the lines of the open-air smoking area. “I’m curious where people will go when the weather gets bad. I know I wouldn’t smoke here in that case.” He predicts issues with the new smoking area at Nieuw Gildestein, too, because it’s located right next to office space. It’s not as easy as it looks to find a good smoking spot, because other smoking areas are also placed near walkways or bike sheds. Jacobs: “As a result of some communication issues between the FSC and the contractor, not all smoking areas have been placed in the right spots yet. We’ll adjust this where necessary in the coming period.”

Social change
The FSC wants to take its time to develop the new policy, given the major and sometimes unexpected consequences, says spokesperson Maarten Post. It’s a given that the new policy will be stricter than it had been, he says. “The university has a social responsibility. It’s also worth noting that the government is creating a plan to make education smoke-free.” Other universities have already started placing restrictions on smoking. Erasmus University in Rotterdam announced a smoking ban around its medical centre, effective 2020, and the immediate surroundings of all university buildings in Groningen have been smoke-free zones since last year.

Requesting new policy
The council of the UU’s Faculty of Science had already requested a university-wide plan for battling smoking nuisances. Direct cause were numerous complaints about smoke blowing into the Buys Ballot building through open doors. Post says complaints about smoke do happen, albeit not that often. “The FSC receives three to four complaints a year, usually from people who are annoyed at sitting in smoke smell, when they’re on a bench outside for example. Or they complain about the many cigarette butts on the ground.”

Employees at the Administration Building are also bothered by smokers. Council member Hanneke Pools represents the employees and understands the criticism. “We’ve noticed this opinion is widely shared, but the nuisances aren’t always reported. We only received one complaint about smoke last year, about the numerous cigarette butts behind the Administration Building. We’ve also heard reports of people smoking in the bike shed instead of in the smokers’ area.” 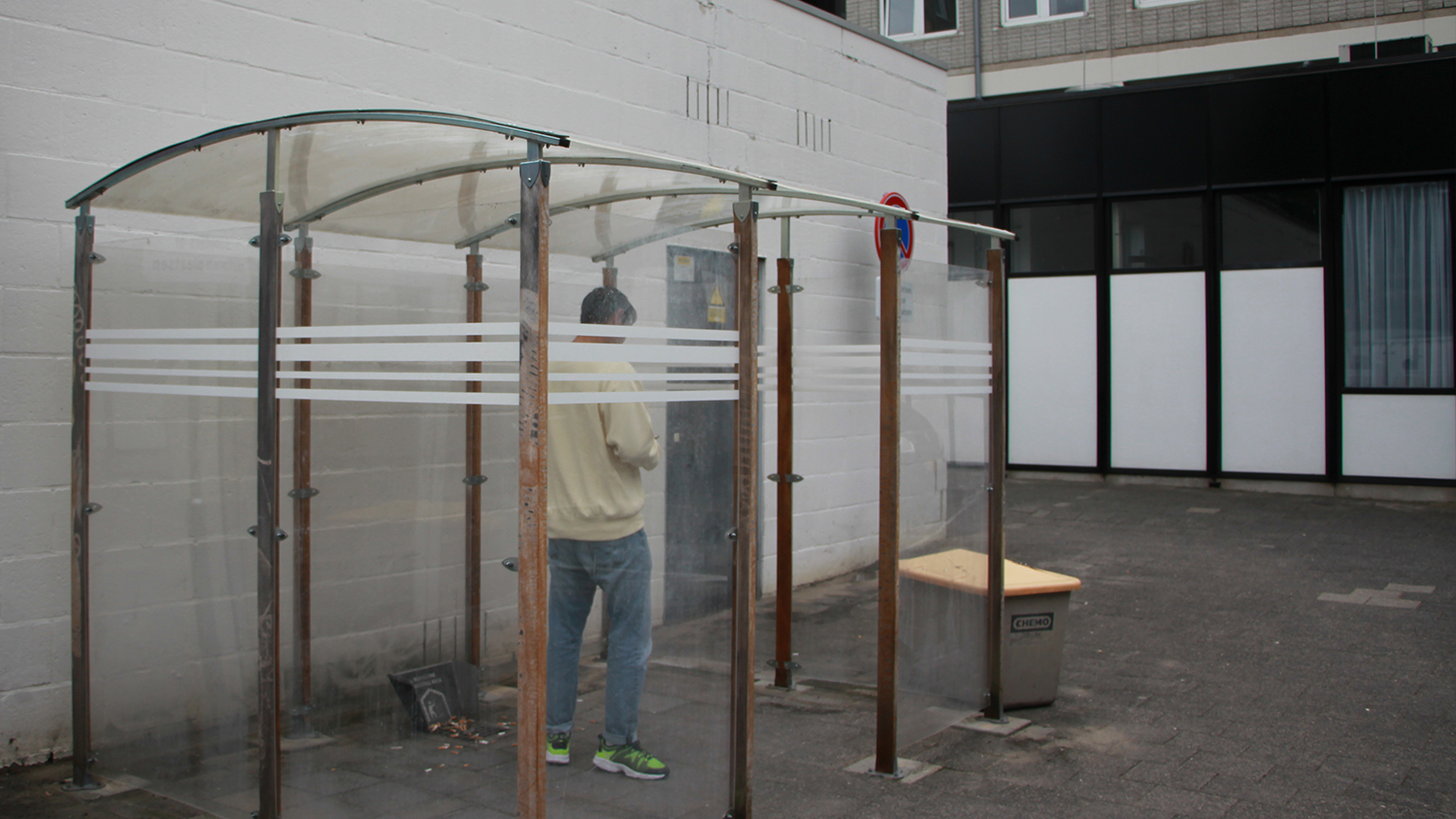 The smokers’ area behind the Administration Building is right next to the walkway. Photo: DUB

Last summer, a transport employee decided to stick notices on their window in the Bestuursgebouw, requesting smokers to go elsewhere instead of sitting on the stoop below the window. “It was ridiculously hot at the time, but I couldn’t open a window due to the smoke. And then I was constantly assaulted by smoke while loading and unloading heavy pallets. It ensured a high level of annoyance, definitely.”

There’s a smoking area right behind the building, but it’s not enough to limit the nuisance. “I can imagine some employees might be bothered by it,” a smoker at the smoking area says. He hopes the university’s research results in a better policy. “Many people walk right by here on their way back to the Administration Building after their lunch break. It’d probably be better to have this smoking area at a different location.”