The government can take a hike, or else we will

The Dutch government is planning on cutting down hundreds of trees in the Amelisweerd forest, in Utrecht, to widen motorway A27. We cannot let that happen, declare UU students Merel de Koning and Lianne Suurenbroek. On October 14, Utrecht-based students will march from Dom square to Amelisweerd to protest against the logging of the forest.

Amelisweerd is the place where we love to go for walk, a run, read a book, and have deep conversations with our friends. It’s the place where we can unwind from our studies, housing problems, money issues, and work stress. We love spending time there to escape from our cramped student rooms and working from home. The oldest part of the forest, located right behind Utrecht Science Park, feels like our backyard. And we don’t want our backyard to disappear.

Due to Plan Approval – the document laying out the plans to widen A27 – a significant part of the forest will be done away with: they intend to log eight hundred trees at Amelisweerd and more than a thousand other trees along the entire route. That's over 60 acres of nature. Considering the nitrogen and climate crisis we're facing right now, this is, of course, awful: the ecosystem is being brutally disrupted and it is not yet clear how much extra nitrogen would be released in the process of widening the motorway and after its completion (links in Dutch, Ed.)

As a result of the construction works, there will also be long-term odour and noise pollution in parts of Utrecht and in the forest itself: it’ll take at least eight years before all the work is done. After the widening, several sports fields – including that of SV Kampong – will be right next to A27, which means we'll be practicing sports amidst exhaust fumes, which can be a cause of lung problems.

Nonsensical and outdated
The proposal to widen the motorway to solve traffic jams and other traffic problems has proven nonsensical and outdated. The Netherlands Environmental Assessment Agency has recently published an investigative report (in Dutch) showing that people are bound to work from home more often, even after the pandemic, therefore decreasing the problem of traffic jams.

In addition, travel behaviour has changed enormously over the past ten years: people are using public transport and bicycles ever more often in the Netherlands, not to mention the widening hardly saves drivers any time in the short term. In fact, in the long term having more lanes only attracts more cars. In short, nothing will be left of the intended time save.

The 1.5 billion euro that the widening will cost could also pay off a considerable number of study debts. Nevertheless, the plan is still on the table. The residents of Utrecht have been fighting it tooth and nail: last summer, 130,000 people signed a petition against it. Citizen Collective KRU is also pursuing a lawsuit against the Plan and a huge forest occupation is in the works by civil disobedience movement Amelisweerd Niet Geasphalteerd (Amelisweerd no Asphalted, in English).

Moreover, neither the municipality nor the province of Utrecht agree with the plans to widen A27. They’re both asking for the plans to be revised, offering a clear alternative to it: additional lanes within the existing motorway, lowering the maximum speed limit.

In solidarity with the forest
Those who think that these initiatives are enough to make the national government pull back are sadly mistaken. Everything we’ve elaborated here is no guarantee that the plan will be dismissed. So, it’s time for action. On October 14, we’ll be walking a protest march from Dom square to Amelisweerd and we would like to ask you to join us.

Help us protect our living environment by being in solidarity with the forest, with the animals that live there, the students who live (and practice sports) there, and with the residents of the Utrecht neighbourhoods of Lunetten, Hoograven and Rijnsweerd, who will endure lots of nuisance from the widening for years. We want more trees and less motorways. The Tracébesluit should be destroyed, not the forest. We want to show the government that they can grab their ridiculous plans and take a hike with them. Or else we will.

Poster from 1978 announcing a protest against the creation of A27. Coincidentally, it was held on the same day: October 14. 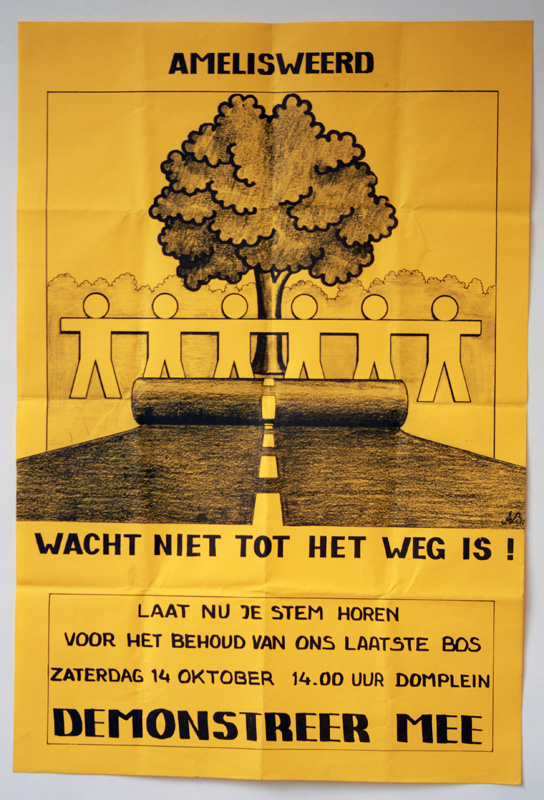