On Thursday, June 3, students will gather at the Malieveld, in The Hague, to protest against the current student loan system. UU student Marte Vroom is a board member of FNV Young & United, one of the organisers of the protest. In this article, she explains why she feels that the loan system undermines the accessibility of higher education in the Netherlands, especially for the poor.

Dutch students and certain European students enroled in higher education institutions used to receive a monthly benefit called basisbeurs, which they didn't have to pay back if they managed to graduate within ten years. Things changed on September 1st, 2015, when a loan system was introduced to replace the grant. At the time, the idea was presented as a "social" reform, which would make things fairer for everyone: the baker would no longer have to contribute to the college tuition of the lawyer’s son.

Political parties PvdA, VVD, D66, and Groenlinks supported the plan in the House of Representatives. The other parties opposed it, as did organisations that fight for the interests of young people, including FNV Young & United and national student union LSVb.

Since the implementation of the student loan system, students who wish to get a Bachelor’s or Master’s degree must take out a loan, with interest. After graduating or interrupting the loan, they have 35 years to pay it back. Although the interest rate is currently low, there's no guarantee that it will not increase in the future.

Loan system causes stress and fear
A survey commissioned by national student association ISO and conducted by research and consultancy agency Motivaction in January 2019 concluded that many students who take out a loan experience increased pressure to perform, as well as mental health issues. They are more likely to be extremely fatigued, emotionally exhausted, and worried about burning out.

Another study by Statistics Netherlands (CBS in the Dutch acronym) from 2021 provided even more reasons to criticise the loan system. Since September 2015, the number of students who kept studying after their Bachelor's degree, moving on to a Master's, dropped from 85 to 70 percent. CBS also suspects that students from the least affluent families feel pressured to graduate within the officially suggested timespan, which would explain why they tend to complete a one-year Master’s within a year more often than students from wealthier families. 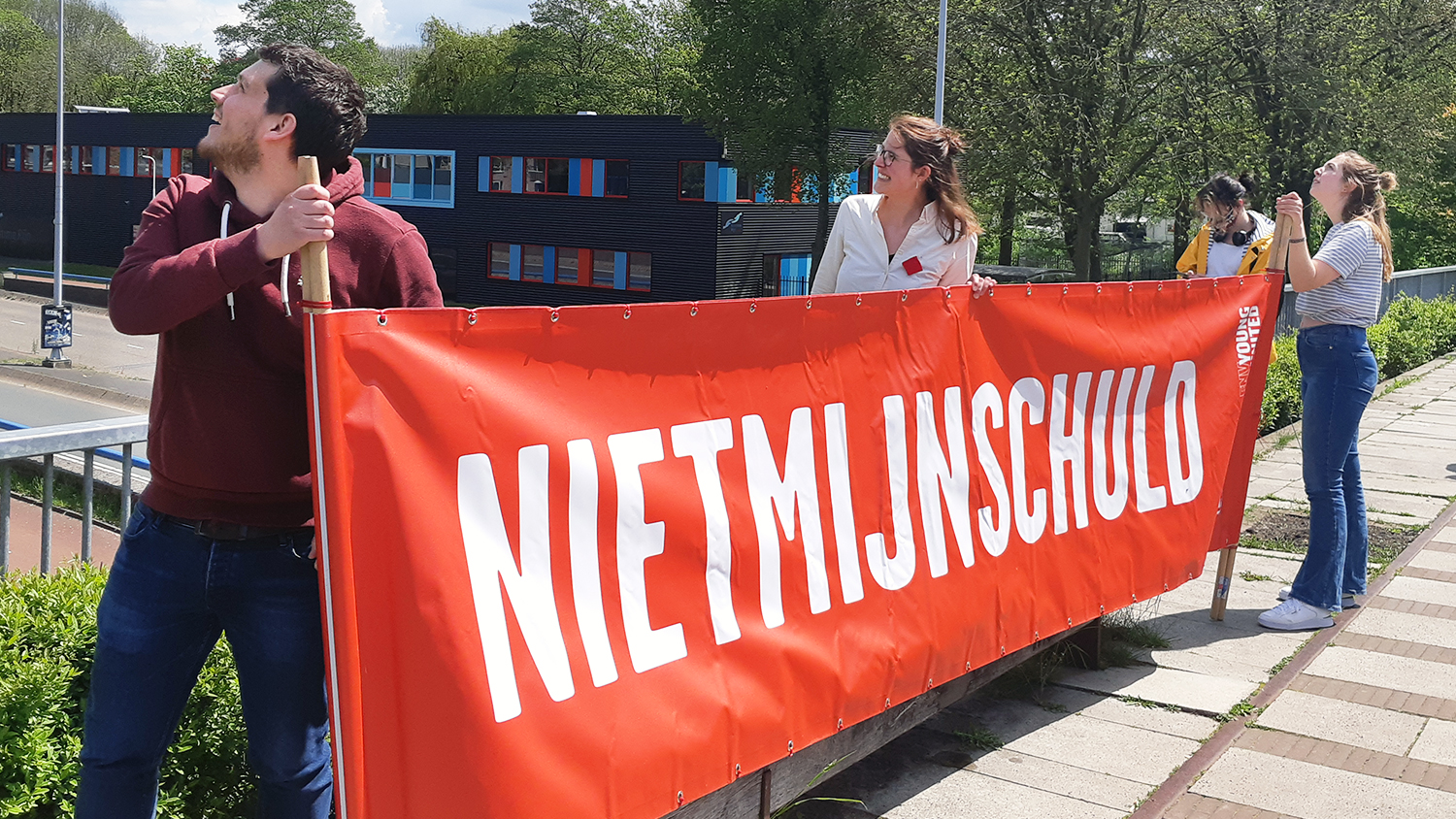 The movement's name, Niet Mijn Schuld, means both "Not My Fault" and "Not My Debt". It's a wordplay with the word schuld, which means both "fault" and "debt". Photo: DUB

Before the loan system was implemented, graduates had an average debt of 15,000 euros. Research by journalism platform Follow the Money shows that this average has increased by more than 10,000 euros, now mounting to a whopping 25,755 euros. It's become "normal" to have student debt in the Netherlands: in 2012, 48 percent of students had one. By 2017, that number increased to 73 percent.

Turning against the student loan system
In 2019, Zihni Özdil, member of the Parliament at the time and spokesperson for political party GroenLinks (Green Left) in matters of education, started a conversation by publicly turning against the student loan system. He called it "rotten" and highlighted the lack of investments in higher education, when the one billion euros that would be freed up by the abolition of the basic grant were supposed to be invested in higher education.

It was remarkable that Özdil distanced himself from the student loan system, as GroenLinks had helped to get a majority support for the plan in the Parliament. GroenLinks' leader, Jesse Klaver, was personally involved in the agreements.

Central-left party D66 was the second one to pull out, following the publication of a report authored by research institute ResearchNed. In 2020, the PvdA (Labour party) joined GroenLinks and D66, stating in their party programme that they no longer supported the system. PvdA was one of the authors of the bill and the one who coined the motto "the baker shouldn't pay for the degree of the lawyer's son". 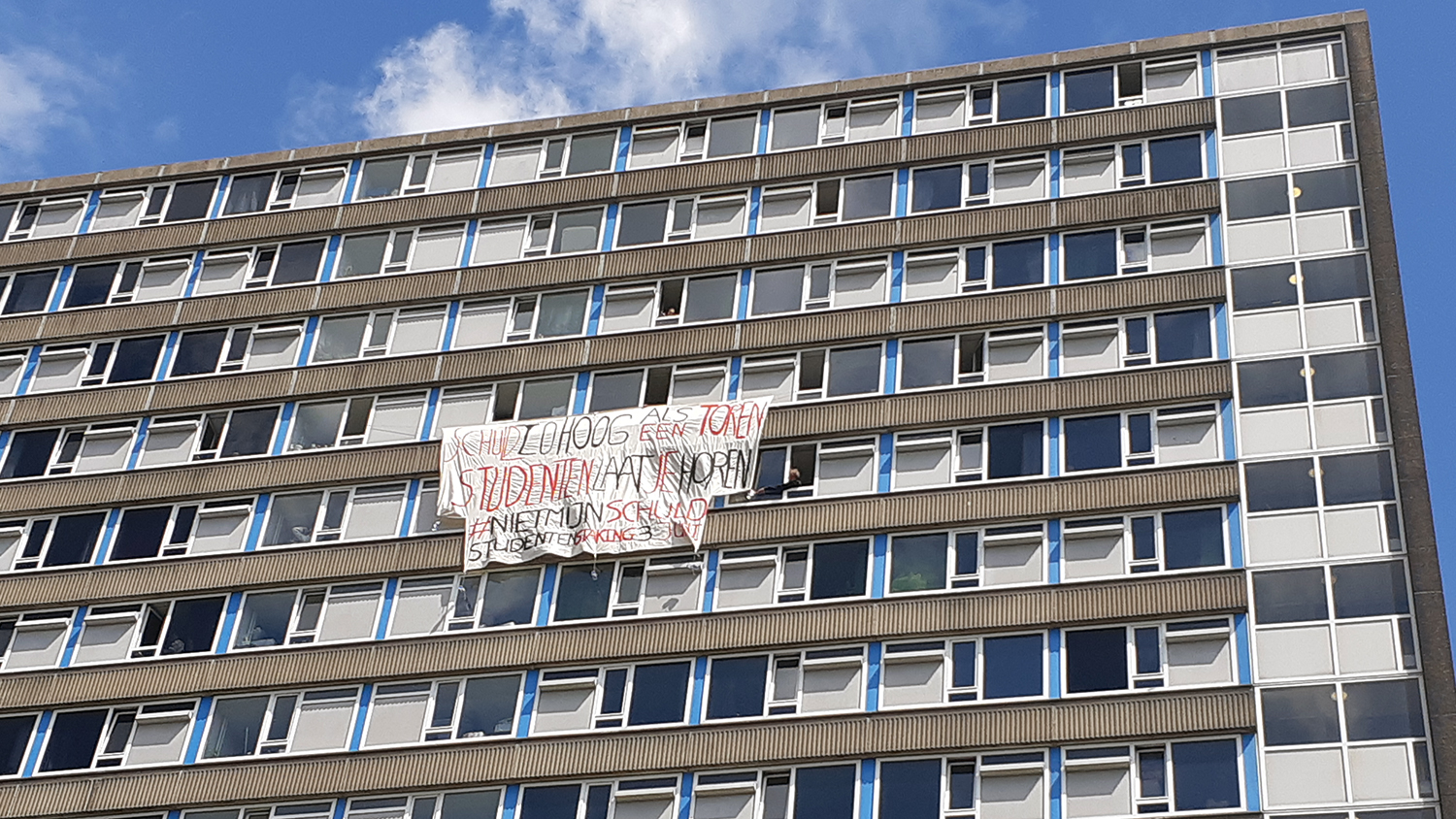 Pressure on the cabinet formation
Now, as political parties try to form a new cabinet following the March 17 elections, they must show to the voters that they're actually going to fulfil the promises made during the campaign. Out of the 18 parties who made it to the Parliament, only VVD is still in favour of the student loan system.

The problem is VVD has once again won the most seats in the elections, which means they exert a lot of influence and will certainly be part of the coalition. That makes it even more important to convince the parties that are likely to join VVD of the importance of including debt-free education in the coalition agreement.

That's why students should let their voices be heard: known as the "bad luck" generation, those who started their studies after 2015 are calling for the abolition of the system and for compensation. They also demand that these agreements are not done at the expense of the (already waning) quality of education, due to structural lack of funding. We’ll be stuck with whatever the parties write in the coalition agreement for the next four years, so this is a crucial matter.

Doing a board year, joining the university council, or even living in student housing is becoming more and more unattainable for students from underprivileged families. Research by Statistics Netherlands and the University of Amsterdam shows that, since the implementation of the student loan system, there’s a strong drop in the number of students from disadvantaged families who proceed to a university of applied sciences after high school.

Studying isn’t just investing in yourself: it’s also an investment in society. Our society depends on scientists, nurses, teachers. That’s why it’s important for people to have the possibility to study without debt. A grant and a part-time job should suffice to get by without accumulating debt.

National student strike on June 3
On Thursday, June 3, there will be a student strike organised by #NietMijnSchuld in collaboration with FNV Young & United and the LSVb. The more students join us, the more powerful our message will be. This is our last chance to convince Dutch politicians that students have the right to study debt-free and that there should be compensation for the "bad luck generation".

It's really important to get as many students as possible to join us at the Malieveld, in The Hague, on Thursday, June 3. It’s going to be a huge student strike. It would be great if teachers would show their solidarity by moving deadlines set for June 3 to another date, letting students resit exams scheduled for June 3 without any consequences, and joining us in The Hague as well. Our future, and that of future students, depends on it. Studying shouldn’t be a privilege, but a right.

If you wish to participate in the strike, you can register here (website in Dutch).