Advice: at least one all-gender bathroom block per UU building

Every Utrecht University building should be equipped with at least one block of toilets that doesn’t have separated sections for different genders. Next to those, the men-only and women-only bathrooms can be retained. This is the advice of the Facilities Service Centre (FSC) to the university board. That way, the FSC thinks, there’s a proper bathroom for everyone.

Since the summer of 2018, three buildings in De Uithof have one block each with all-gender bathrooms. The introduction of these toilets was a pilot. Now, the evaluation phase has finished, and the evaluation and an advice have both been submitted to the University Council. The evaluation shows that people tend to use the nearest bathroom they can find. The fact that a bathroom is all-gender or men or women-only is barely of interest. Still, there’s a small group of users who appreciate the existence of these bathrooms. For that reason, the Facilities Service Centre is advising the UU to equip every building with a block of all-gender bathrooms, next to the bathrooms exclusively for men or women. This way, the UU is both inclusive, and serving those who specifically choose to use a gendered bathroom. Ideally, the FSC says, people should be able to go to a bathroom of their choice on every floor.

Why did Utrecht University choose to turn a number of bathrooms into gender-neutral ones?

The Strategic Plan of 2016-2020 has a high focus on the theme of diversity. In 2017, the Taskforce Diversity was established to encourage and promote this theme. Several activities were undertaken and policy decisions were made to make the university more inclusive. The desire to have bathrooms that are accessible to people of all genders had already been going around the university before then. Because those who identify as neither male nor female, still had to make the decision to use a men’s or a women’s bathroom. University Council members of the Utrecht PhD Party requested that the university board take action: “It’s old-fashioned that you have to choose,” said then-councilmember Nico Naus. At that, the decision was made to start a six-month pilot.

What did the pilot mean?

Shortly before the summer of 2018, three bathroom blocks in which the men’s toilets borders the women’s toilets were transformed into all-gender toilets in three buildings: The Administration building, the Ruppert building and the M.G. de Bruin building, all located in De Uithof. This meant some adaptations to the toilet blocks. A partition wall was installed in the former men’s bathrooms to hide the urinals. Each bathroom stall received the same equipment, and the ‘men’ and ‘women’ signs were replaced by all-gender signs. A questionnaire was set up to find out what UUers felt about these bathrooms for everyone. In July, October, and December of 2018, users of both the all-gender bathrooms and the gender-separated bathrooms were interviewed, with the main question being: what did they think of their bathroom visits? Aside from the three previously mentioned bathrooms, this was also done in the W.C. Schimmel building and the Langeveld building where there’d always been an all-gender bathroom. A slightly different questionnaire was published online, available to all UUers. Results were to be analysed in the summer of 2019.

The results of the online and personal questionnaires are provided separately, because the two surveys were slightly different. Still, the results are very similar. Both surveys show that for over 80 percent of respondents, their decision to visit any given bathroom is influenced almost entirely by distance: when you have to go, you visit the nearest location, regardless of whether that’s an all-gender bathroom or not.

When asked about preferences, only a small percentage of respondents (1.7 percent online, and 1.6 percent of interviewees) consciously decide to use the all-gender bathrooms.

A larger percentage consciously choose to use the men’s or women’s bathrooms. The difference between the two groups of respondents is bigger: of those responding to the online survey, 11.8 percent give this answer, whereas 5.8 percent of interviewees say the same. 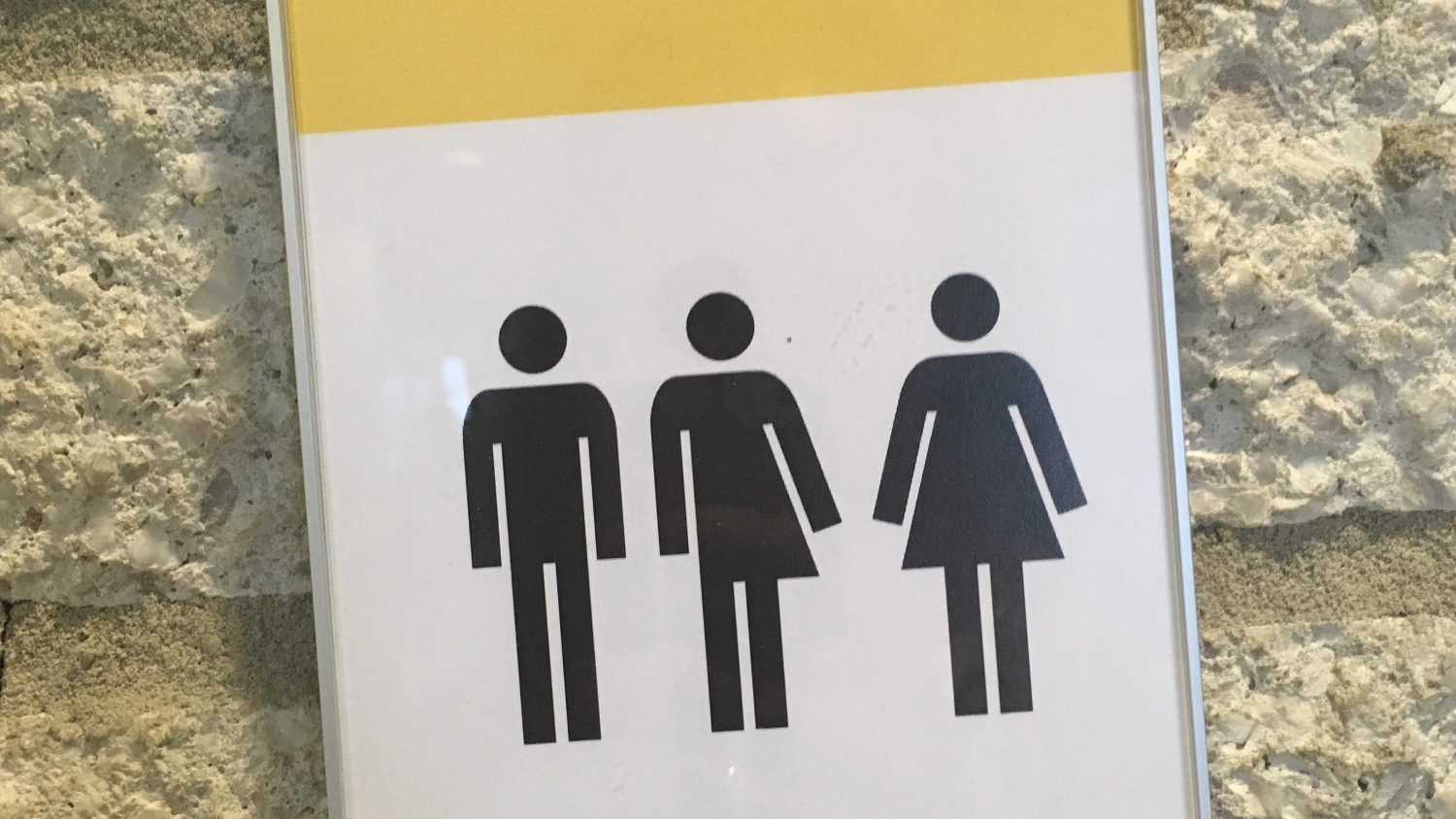 What do the survey respondents want bathrooms to be like?

A little over a fifth of all respondents want to see exclusively gender-separated bathrooms. The difference between the online respondents and interviewees is larger here: the percentage of people online with this opinion is 27.4 percent, while 14.7 percent of interviewees expressed this opinion.

Why aren’t the responses separated by gender or cultural background?

In the DUB article published in May 2018, then-project leader of the FSC Ton van Helmondt was asked what kind of criticism can be expected on having gender-neutral bathrooms only. Expected were complaints about men getting annoyed with women doing their make-up in the shared space where the mirrors are, or women who get annoyed at sharing a room with men and thus being unable to adjust their hijabs. The survey, however, does not include any questions about the respondents’ identities. Reason for this was to keep the survey inclusive, says Van Helmondt, although for a study that takes stock of the level of support for the plans, it would be an added value to know more about who answers the questions.

Why is the FSC now using the phrase ‘all-gender bathrooms’ as opposed to the previously used ‘gender-neutral bathrooms’?

Researchers at the faculty of Social Sciences, who had analysed the survey results, say the new term is more inclusive. Gender-neutral could be interpreted as a third gender. ‘There are men and women and gender-neutral people’. The term all-gender, they think, really removes all the boundaries between genders. Marjon van der Kaa, who supervises the project from her position in the Facilities Service Centre, hasn’t been able to find a good Dutch term that encompasses the concept of all-gender. She says she’d prefer to just see the word ‘toilet’ or ‘bathroom’ on the all-gender bathrooms, as that says everything it needs to, in her view. “It’s a bathroom, and regardless of what your gender is, you’re free to use it.”

How much value should we place on the surveys?

A total of 1,796 people responded to the surveys. Of these, 572 people were interviewed in person, of which 125 in the Administration building, 105 at Veterinary Medicine, and 188 in the Ruppert building. The online questionnaire was filled out by 1,224 people.

The surveys measure the level of support, and didn’t need to be a representative study.

How much value is the Facilities Service Centre (FSC) placing on the pilot?

Based on the survey responses, everyone should be all right with the proposal of equipping each building with all-gender bathrooms next to the traditional gender-separated bathrooms, is Van der Kaa’s conclusion. The transformation of bathrooms does have to be feasible both financially and structurally. For yet to be constructed buildings, the advice is to create two types of toilet blocks.

Why did it take so long before this proposal was announced?

Shortly before the summer of 2018, three buildings were equipped with all-gender bathrooms. The advice was expected to be published before the summer of 2019. Van der Kaa says the delay had nothing to do with trying to avoid difficult discussions, as had been suggested by Master’s student of Gender studies Simone Zalla Aumaj in an interview with DUB. She took over the study from a colleague who was sick for a long time. “The subject was entirely new to me, and I wanted the survey results to be analysed by scientists. That’s why it took longer.” There was also a staff change amongst the scientists at Social Sciences analysing the responses, which delayed the analysis a little more.

What’s going to happen with the FSC’s advice?
The advice will be discussed in the public meeting of the committee of Finances, Staff & IT of the University Council, on February 3, 2020. The members of the University Council will be allowed to voice their thoughts about the advice, and then in turn advise the university board. The Executive Board will then decide which signs will be placed at which bathrooms at the university.