Corona crisis for internationals: taking the last flight back to your home country

A fellow exchange student and Britt de Visser after travelling home from the Netherlands together.

Since the new measures for curbing the corona virus have gone into effect, everyone’s lives have turned upside down, including those of the international students studying in the Netherlands. Every day – even every hour – can bring different news and policies. “Friday at 4pm, I still thought I was going to stay in the Netherlands. A few hours later, I was at Schiphol to get the last flight back to Italy.”

International students in Utrecht have a tough decision to make: stay here, or return to your home country. Those who choose the latter, run the risk of getting stranded because borders are closing, or will have to go into quarantine for two weeks after arriving home.

The Utrecht University policy isn’t exactly crystal clear either. On the one hand, the advice was to travel as little as possible. On the other, the UU is strongly urging its Dutch students abroad to return home, and internationals are advised to return to their home countries now they still can.

Given that there are endless possible situations people can find themselves in, the policy is made to measure in the end, says Cristel Teusink. She’s the coordinator for student questions sent in to coronavirus@uu.nl. Around twenty people are working hard to respond to the emails, to provide everyone with solid advice, and refer them to others when necessary.

Teusink can’t say how many international students have returned home. She expects that many of the exchange students – who are usually only here for one semester – will have returned home. It’s harder to say anything definitive about international degree students, who are here for a full Bachelor’s or Master’s programme. Teusink: “Every single day, the policies are adjusted or strengthened. Everywhere in the world, public life is put on hold, and airspaces are closed down. You can’t say with certainty whether any country in the world will still be ‘open’ in two weeks’ time. That’s what we’re telling students who are currently in, say, Uganda, and think ‘I’ll stay here, because things aren’t that bad here yet.” 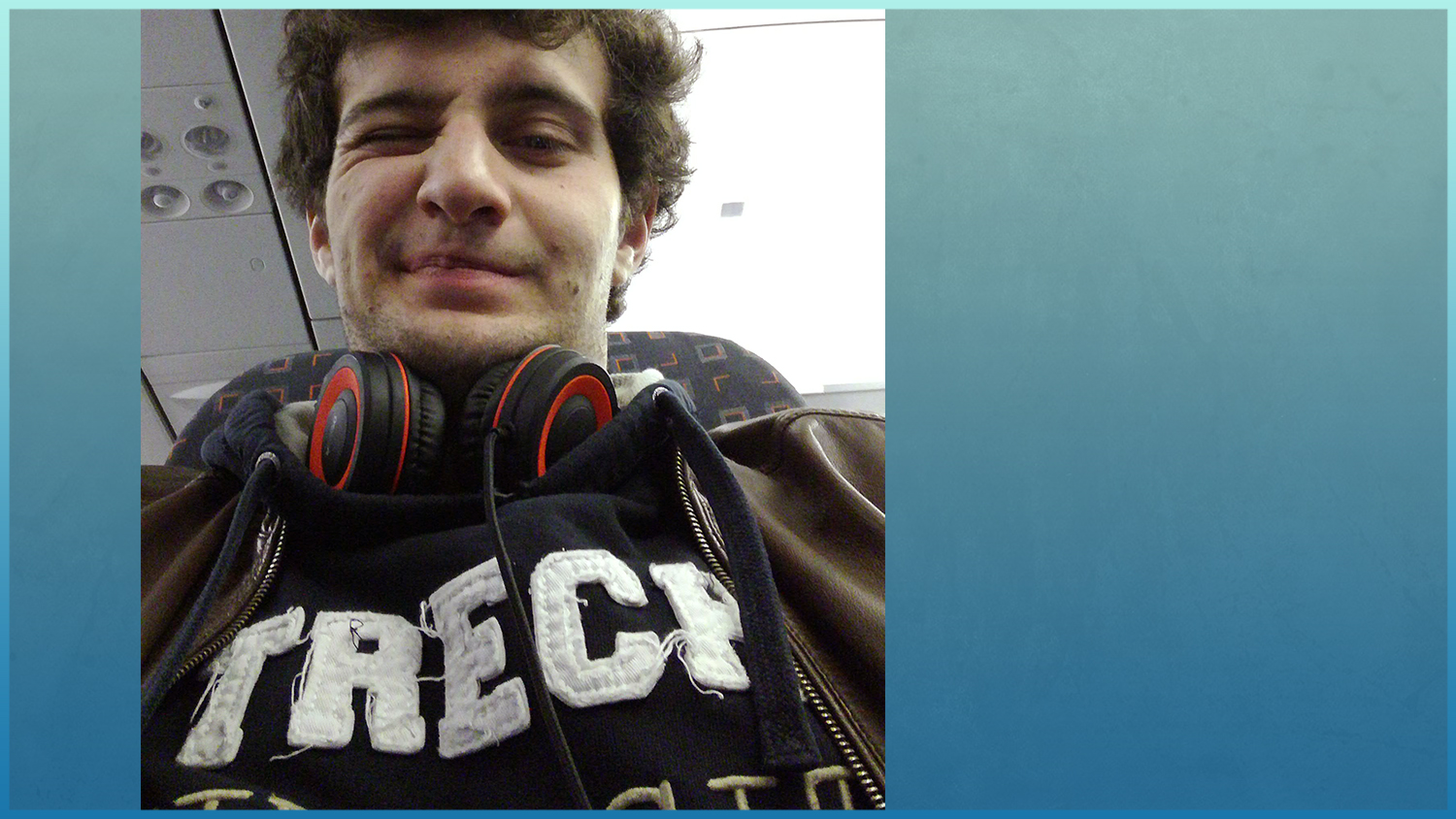 Mario about his airplane selfie: “It's a horrible photo, I know, but at least I had my patriotic UU sweater on, and I am joyful sitting on the very last flight to Italy after one hour of painful uncertainty.”

The last plane
Mario Parolari is one of the international students at the UU who had to make the rushed decision to return home. He’s a student of Philosophy, Politics and Economics (PPE), and is from Venice. “I’m from the second-worst affected area in the second-worst affected country in the world, so everything’s in total lockdown here. You can’t go out without a form in which you declare what you’re doing,” he says.

After it was announced on March 12 that the UU would switch entirely to digital education, and would close its doors, everything happened very fast, Mario says. “On Friday, around 4pm, I called my parents and thought I was staying in the Netherlands. I preferred being free in the Netherlands rather than being locked in my home in Venice, I thought. After the phone call, I checked for flights and realized the very last plane to Italy would depart at 6.30pm that same day. I quickly grabbed my belongings and raced to Schiphol, where I spent another hour in uncertainty, because the Italian and Dutch governments didn’t want that plane to depart. In the end, I made it to Milan around midnight, and finally made it home to my family.” 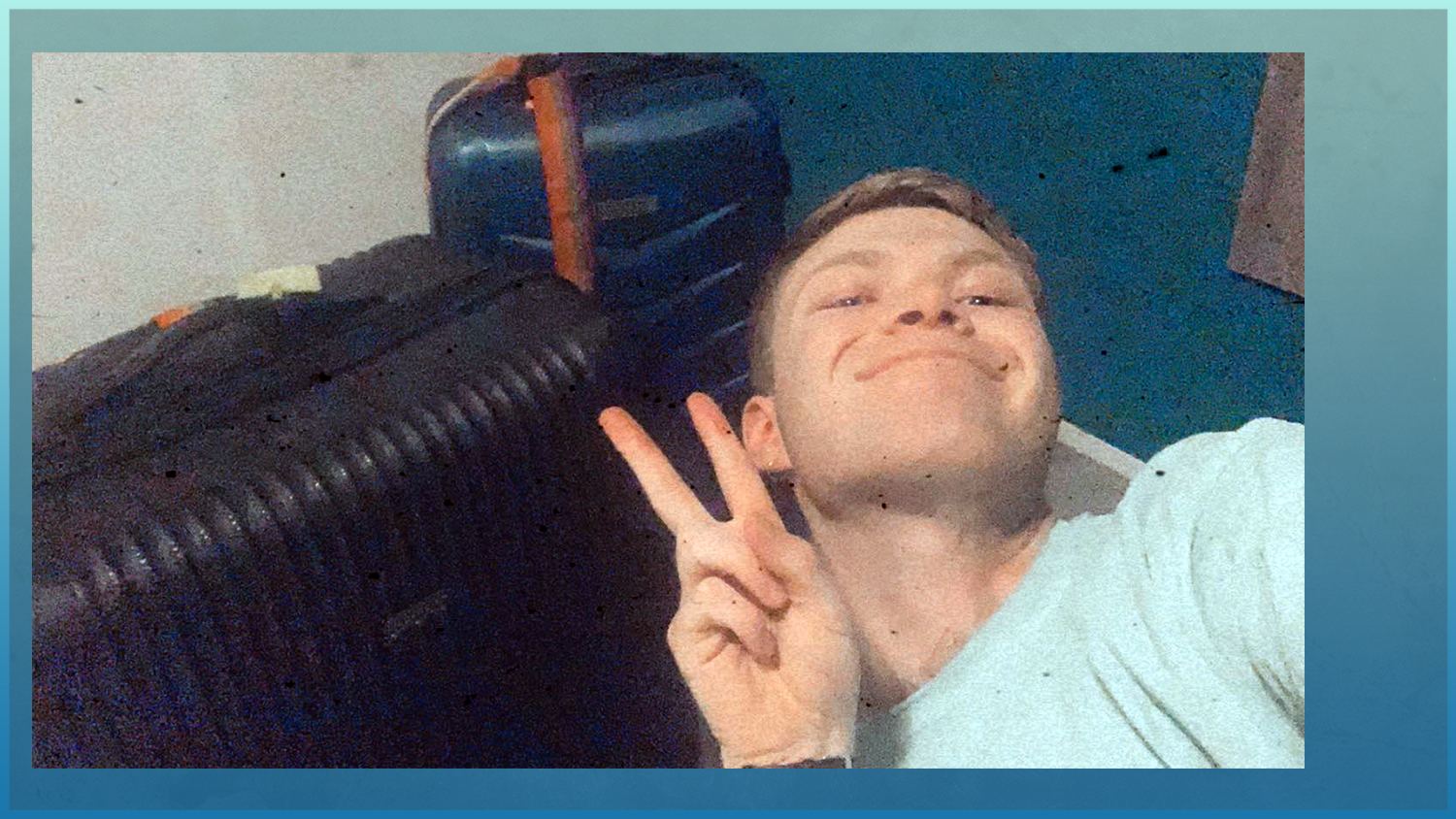 Stricter measures
Exchange student Willem Proos also rushed home to his home country, Australia. He’s a student of Psychology and International Relations at the University of Sydney. His home university strongly urged him to return while it was still possible to do so. “I do have to stay in total isolation when I return to Australia. This quarantine was made mandatory last week. That means minimal physical contact with my family and no physical contact with friends, university staff, or work colleagues.”

One of the reasons Willem decided to leave when he did, was because he didn’t want to run the risk of getting stranded on his way home. “I’d have one or more layovers in the Middle East and/or Asia, and the border policies were changing constantly.” 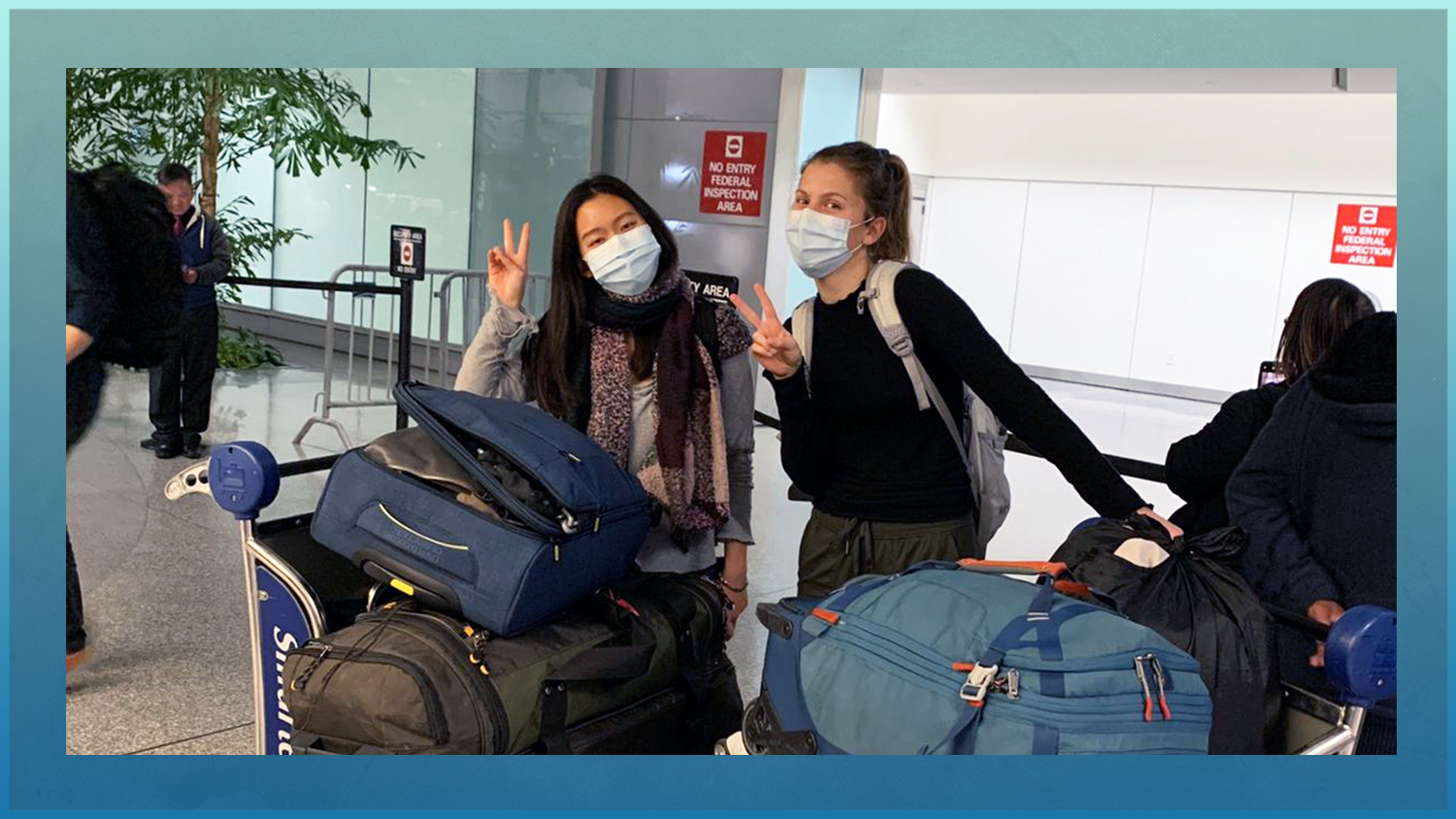 A fellow exchange student and Britt after travelling home from the Netherlands together.

Britt de Visser, a psychology student from Santa Barbara, California, had the same considerations. “When Donald Trump implemented the travel restrictions to and from Europe, I already wondered whether I should go home. The situation was escalating so quickly, and I did not want to be stuck in lockdown in a student flat in the Netherlands. I received an email from my home university last Thursday night that my programme was cancelled, and by Saturday morning, I’d packed up my entire life in the Netherlands and was on a flight back to the States.”

Last week, Britt wrote a blog about the corona virus for DUB, in which she urged ‘the Netherlands’ to take firmer action against the virus. Willem, too, wouldn’t have minded earlier and stricter action from the Dutch government. He does want to explicitly mention that he’s not an expert, so his opinion on this subject should be seen as the umpteenth ‘bar opinion’. “It seems like the time to enact these measures was weeks ago. The importance of social distancing had not been stressed to an adequate degree. While I was on my way to the airport, it seemed as though life in the Netherlands continued as normal; I saw lots of people sitting in cafes and such, which seems dangerous to me.”

Different time zones make online education tricky
En Ning, a student from Malaysia, chose to remain in the Netherlands. She’s doing the two-year Master’s programme in Educational Sciences, and had an exam on Tuesday. “Online, of course. It was a statistics exam, and they turned it into a kind of take-home exam. The questions and instructions were published at 9am, and then you had all day to take the exam,” she says on the phone. “The online exam went fine. The lectures are a bit tricky for teachers, I’ve heard, but our lesson on Skype went well. There are only seven students in the programme, so we’re very flexible.”

Her family lives in Malaysia, where there’s also a corona lockdown. She’d love to be there, “but the journey is a long one, so there’s a bigger chance of getting stranded on the way there. Moreover, all my classes are online now, but they’re still at a specific time. That would become tricky if you’re in a different time zone. So it made sense to stay in the Netherlands and practice social distancing and such.”

En Ning is relieved that the virus is finally being taken seriously in the Netherlands. “I started to become nervous back when the virus became a serious threat in Asia. And I get that things work differently here, culturally as well: you just deal with things differently. But I do feel like the Netherlands should’ve taken stronger measures earlier. There’s still no complete lockdown here. If the Netherlands had taken the situation seriously sooner, the panic wouldn’t have been as bad, and perhaps people wouldn’t have stockpiled on groceries. Perhaps then, people would’ve simply become slowly aware of the threat of the virus, and they could’ve prepared themselves accordingly. Now it seems as though people are either in total panic, or they don’t adhere to the measures because they’re not aware of the danger.”

Study delay
Mario, Willem, and Britt are still figuring out how their situations will progress. Exchange student Britt is dealing with a financial nightmare, she says. “I’m still trying to figure this out with my home university, to see if I can get refunded anything for my exchange programme. Luckily, I was ahead with my studies before arriving in Utrecht, so I won’t fall behind.”

Willem is keeping in touch with his teachers, but has no idea how they’re going to organise the exam, or how they’ll wrap up and grade the group projects. “My group members have already left the country. I’m waiting to hear more. If everything to do with my exchange falls to pieces, I may have a six-month study delay.”

Bachelor’s student Mario trusts that his PPE lessons can easily be moved online. “Exam time is approaching, and it’s easy to submit your assignments online. Exams can be changed to a take-home form. We did ask whether it was possible to move some deadlines, given the situation. Our study advisor told us from the very first day that there’s no intention to let the coronavirus have a significant impact on our study paths.”