Dare to be Grey is still looking for nuance, even in the racism debate

Screenshot Dare to be Grey

2020 has been marked by heated discussions about racism around the world, with terms like ‘Black Lives Matter’, ‘institutional racism’, ‘diversity’, and ‘inclusivity’ becoming part of our shared lexicon. Unfortunately, polarised debates such as this one have often led to insults, shouts, and conspiracy theories. Once again, Dare to be Grey, an organisation founded at the UU, is looking to do away with the “us-versus-them” discourse. We spoke with founder Jacco Pekelder and editor-in-chief Edwin van de Scheur.

Let’s go back to the year 2015. Extremist attacks plague the western world, with Paris alone facing several attacks, including one at satirical magazine Charlie Hebdo and another one at the Bataclan music hall. Meanwhile, Greece is flooded with refugees from war-torn Syria.

Reason enough for the U.S. Department of State to start a worldwide peer-to-peer contes, asking students from several universities around the world to come up with a solution to violent extremism, by using social media and targeting young people. Jacco Pekelder, then teacher of History and International Relations at Utrecht University, now Professor, easily found 21 students willing to work on that question as an extracurricular activity. The result was Dare to be Grey, a foundation encouraging society to debate issues with more nuance, showcasing perspectives that are more representative of the society at large, instead of only listening to “extreme minorities.”

Despite the strong start, it’s been rather quiet at Dare to be Grey lately. “Trump was elected president and Brexit happened around the time we won the competition,” reminisces Edwin van de Scheur, Editor-in-chief of the organisation. Back in 2015, he was pursuing a Master’s in International Relations. “Since then, the extreme has gotten bigger and bigger. The refugee crisis faded into the background, while the racism debate, driven by the discussion around Zwarte Piet (Black Pete), has taken the foreground. We needed some time to tweak our message because the original one, which was based on the refugee crisis, just didn’t work anymore.” 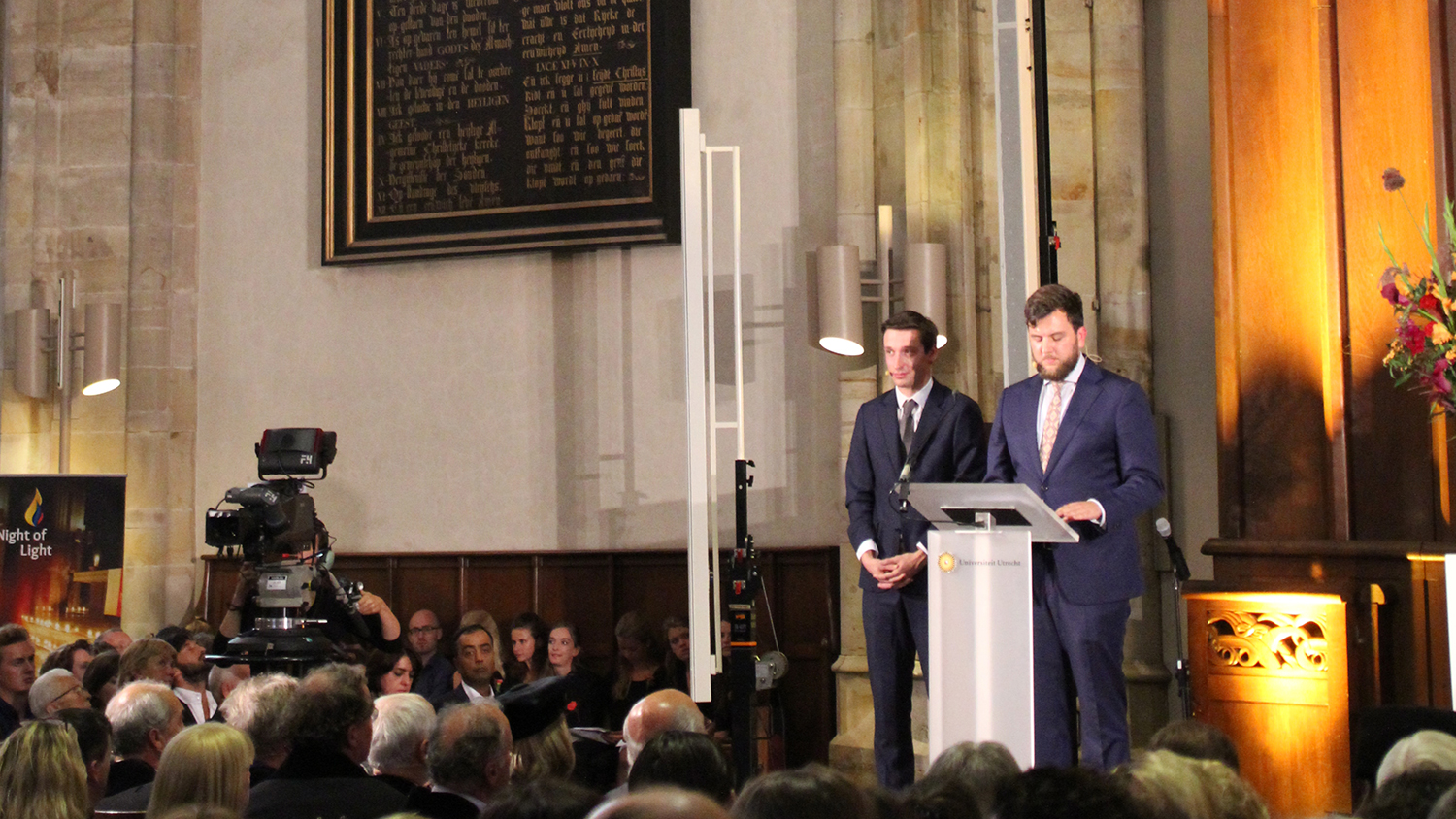 Presentation of Dare to be Grey during the start of the academic year, 2017. Photo: DUB

What trigged your desire for nuance, and what is your work based on?
​​​​​​​Pekelder: “Dare to be Grey is at the cross-section of academia and society. As an academic, I don’t want to be too careful when announcing our scientific analyses. We want to inspire more nuanced societal debates, but first you need to dare saying that because that’s your academic story. That’s our job.

“Our society is suffering from ‘debate sickness’: the urge to be against things. Instead, we would like to ignite people to wonder why they are in favour of things. We are posing this question from the standpoint that reality is more complex and nuanced than the black-and-white picture. I want to draw attention to the many shades of grey out there!”

The racism debate is an example of a discussion that’s become highly polarised, which is exactly why it may seem stuck. Dare to be Grey finds that tolerance isn’t an option when it comes to discrimination, right?
Pekelder: “We wanted to take some of the sting out of the debate, so we created visual portraits of people who feel touched by this subject. We spoke with someone from the populistic right who didn’t think very ‘grey’, but we noticed that he was still curious about the other side. Our choice to portray him was criticised by the Socialist Party (SP), academics from post-colonial studies, and some other politically engaged people. A story against polarisation was something they didn’t really like.”

Van de Scheur: “The point we were making was interpreted as though we were equating an emancipatory movement and an oppressing party. Black Lives Matter and other activists against racism felt like we were dismissing their movement, but that’s a very abstract interpretation of our message.

“However, the criticism sometimes did make sense. With two extremes that demand all the attention, for instance jihadism versus the far right, it’s about finding middle ground. But that doesn’t work with racism, discrimination, and Black Pete, because discrimination isn’t an opinion. We had to broaden our message because, in the racism debate, you can’t put two extremes on the same scale.”

Pekelder: “In the beginning of our foundation, we made our own black and white Pete, whom we called Grey Pete – without the red lips, by the way. We were basically trying to say something about the way people debated about this character, showing our desire to keep all options open and not to silence people. However, the ‘Kick Out Zwarte Piet (KOZP)’ movement felt like grey Petes like ours were the same as Black Pete.

“I understand their arguments. KOZP chose a strategy of fierce fighting. They want to persuade people by saying: ‘this is how you should think now, that’s the only right way’. But such a strategy can have counterproductive effects. There’ve been situations in which this approach has sharpened the antagonism instead of taking the sting out. We didn’t want to act against these groups per se, our intent was more general.”

Different strategy
Dare to be Grey had to choose a different strategy to fight polarisation in debates, which turned out to be rather tricky, because sometimes it can be useful to put two different views opposite each other. Van de Scheur: “Polarisation isn’t necessarily bad, but it’s an escalation that you don’t want to take too far. Just look at the US: they’ve reached, or crossed, a tipping point, after which it’s incredibly difficult to go back. You need to watch out for escalation, but that doesn’t mean that polarisation isn’t allowed. Sometimes, it is necessary, like in an emancipatory movement. We regard it as a democratic phenomenon.

Ways of thinking
Dare to be Grey also wants to tackle generalisations and assumptions people make, looking to dismantle this type of subconscious thinking. Van de Steur: “Take, for instance, the ‘yellow vests’ movement in 2019: do you remember that woman who walked into a meeting with Rutte, while on the phone, and didn’t want to shake his hand? All the others were polite, though. It’s usually just a small amount of people who put situations on edge -- and those are often the same people, supporting each other. Many of the yellow vest people, for instance, transferred right on through to QAnon [an American extreme-right conspiracy theory about a supposed deep state that’s said to be against Trump, RW]. Insight into how those mechanisms work can give you the tools to emphasise nuance and ‘greyness’’

Insight
“The media are victims of that way of thinking, too,” says Pekelder. “But a ‘conspiracy’ of the ‘MSM’ [‘mainstream media’, RW]? That’s complete nonsense. People think about issues as if they were plays or scripts: how do conflicts play out, and what roles are there to divide? Through typecasting, they look to fulfil those roles.”

At its core, Dare to be Grey wants to give the ‘grey middle’ a voice, despite the criticism this can generate at times. In fact, the criticism often confirms the need for a nuanced point of view. Although polarisation is everywhere these days, most people don’t feel at home there.

So, what does the organisation have in store? When asked about their future plans, they are vague. “We haven’t announced what we’ll be doing yet,” Van de Steur says. However, an online manual or guide, in which they will explain the terminology used in societal debates, is in the pipeline. The publication will first be unveiled in English, with a Dutch translation to follow.