Gender quota is a step backwards for individual freedom

Every individual, regardless of gender or ethnicity, wants equal opportunities, such as these students at the Career Day of UU Archive Photo DUB.

Setting a gender quota is an attack on individual freedom. People are appointed because they are women. Because of this, women and minorities are pushed into the role of victim. This is the opinion of the students Allie Fredrich and Prerna Chaudhary, who both participate in the Humanities Honours Programme and are candidates at De Vrije Student. In this essay, they respond to the memo of the University Council which proposed the introduction of a gender quota at the University.

Last week, our party, with 2 of the 24 seats on the University Council, was the only one to refrain from supporting a memo. This memo wants to introduce a Gender Quota at Utrecht University. In this essay, we want to indicate why we think that the introduction of a gender quota is not a good idea and will open the debate to the entire University.

The goal: Parity or equality?

This is how the conclusion of the memo starts. Furthermore, the University Council proposes that one third of the board members must be female. If no woman can be found for a position on the board, the seat should be left empty and not occupied by a man. Any faculty that does not achieve this quota would be sanctioned [memo Gender Quota, pp 7-8].

A required percentage of men and women at each faculty within the University is presented as:

However, Objective 5 does not advocate parity, or sameness, but equality, and equal treatment for men and women. Sustainable Development Goal 10 is about fighting injustice in a much broader context.

The difference between parity and equality is not addressed in the proposal. It talks about achieving a required percentage of men and women in each faculty. This goes against the idea of equal treatment. This means that not every person is equal and has the same wishes, but that every person should be given an equal opportunity.

Individual interests and the role of prejudice
As an argument for women's quotas it is presented that women do not have the same opportunities to plan their careers or studies as men do right now. The lack of female professors and administrators is only explained by the argument that most people have subconscious prejudices against women in the professional world. Although sexism and prejudice certainly exist and are still present in our society, the methods to measure and prove this 'subconscious bias’ are controversial [4]. Since the test methods for "subconscious bias" do not yield reliable results, it is more productive to focus on improving communication and relationships between individuals.

This leads to the question whether sexism and bias are the only reasons why women apply less for certain jobs. Socio-psychological studies, investigating the choices and personality types of men and women in our world, show that there are more similarities between men and women, but that at the same time there are many differences in the preference for a profession between men and women. These differences even increase when men and women are raised more gender neutral, according to cited research [5,6]. The University Council’s memo indicates that even when efforts have been made to recruit gender-neutrally for positions, few or no women have shown any interest.

“The Geosciences Policy Plan shows that some departments have indicated that in recent years, on some recruitments, despite the gender-neutral text, (almost) no women responded". (memo Gender Quota)

A quota is not necessarily going to increase the interest of women in all sectors. When the interests of individuals are fairly established and are considered pivotal, it should be possible for different gender relations to exist. It is also difficult to determine at any given time how many men and women are interested in a particular study or job. This shows that the problem needs to be addressed in a different way, possibly on an individual basis. In this way, the focus is not on parity but on equality. Setting a quota ensures that many individuals do not get a fair chance to get their own preferred study or job.

Now, it is indeed important that the interests of individuals are fairly established. The memo suggests that a quota is a necessary solution for a culture change.

"But, as it turns out, a culture change doesn't happen by itself. That's why a gender quota is a necessary tool." (memo Gender Quota)

This approach is seen as a solution to discriminatory application procedures and as a mechanism that will increase accessibility in education. This suggests that the culture of work and place of study inherently do not allow women to achieve better positions and that we can only solve this problem if we force a representation. But what kind of culture yields a quota? Does it actually guarantee meritocratic access to jobs and studies? What alternatives do we have? 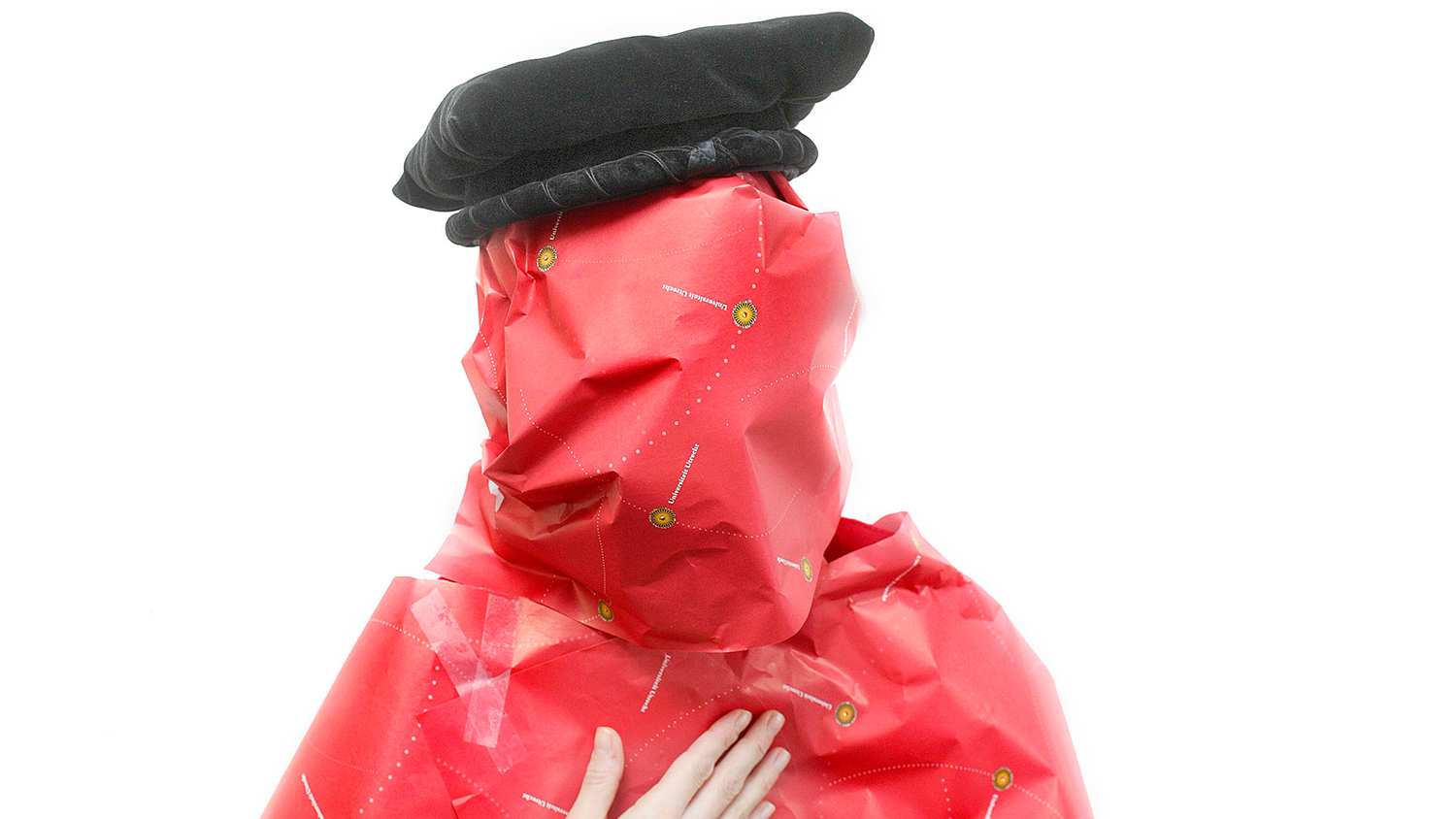 Meritocracy as a starting point
To answer the first question, it is important to understand the position of meritocracy in our society. Meritocracy is the foundation of a society in which every human being is approached honestly and without prejudice. A meritocratic culture exists in a society in which each person is given the opportunity to climb the social ladder based on his or her own merits. [7] Value is assigned to a person on the basis of what he or she achieves - his or her effort, talents, skills, and dedication - rather than his or her population group (such as sex, gender, or ethnicity).

In a pluralistic society, we disapprove of treating individuals better or worse based on inherent characteristics and instead focus on personal performance.

Meritocracy is the ideal we strive for as a social democratic liberal society. It is a difficult ideal to maintain and it can certainly be better implemented in various areas. At first sight, the thinking behind the quota seems altruistic with the intention of addressing the failure of meritocratic systems. However, it creates a number of new issues.

A quota appoints us - women and minorities - as victims, and tries to solve this by introducing a system in which the norms and values that it holds so dear are lost. Quotas achieve the opposite of meritocracy: they ensure selection for positions based on immutable characteristics, instead of one's own merit or right.

We are placed on a pedestal as women by quotas, while at the same time they belittle our skills. On the one hand they communicate to us that we are allowed to use our potential, on the other hand that same potential is not considered sufficient to achieve our goals. Thanks to quotas, we may be able to get the positions we really want, but we never know if we really deserve these positions or if it is only because of our gender.

By discriminating against others, quotas may be able to benefit us, but that does not alter the fact that it will remain discrimination. Fighting fire with fire cannot be the solution. The end never justifies the means, when the means changes the goal to be achieved.

Intersectionality and capabilities
Introducing quotas changes society and especially the freedom people feel. [8] For a long time, Martha Nussbaum's capabilities approach has been cited as a leading approach to achieving equal rights for all people. [9] This approach puts liberties at the centre, states that all people should be approached fairly, and is incompatible with the use of quotas. This is partly due to a problem that we show by means of intersectionality.

Intersectionality is a theoretical framework that shows in particular how belonging to several different groups leads to a complex identity. The intersection of these identities influences choices and opportunities in life, and how one is treated by others. The intersectionality emphasises the inherent problem of gender quotas: 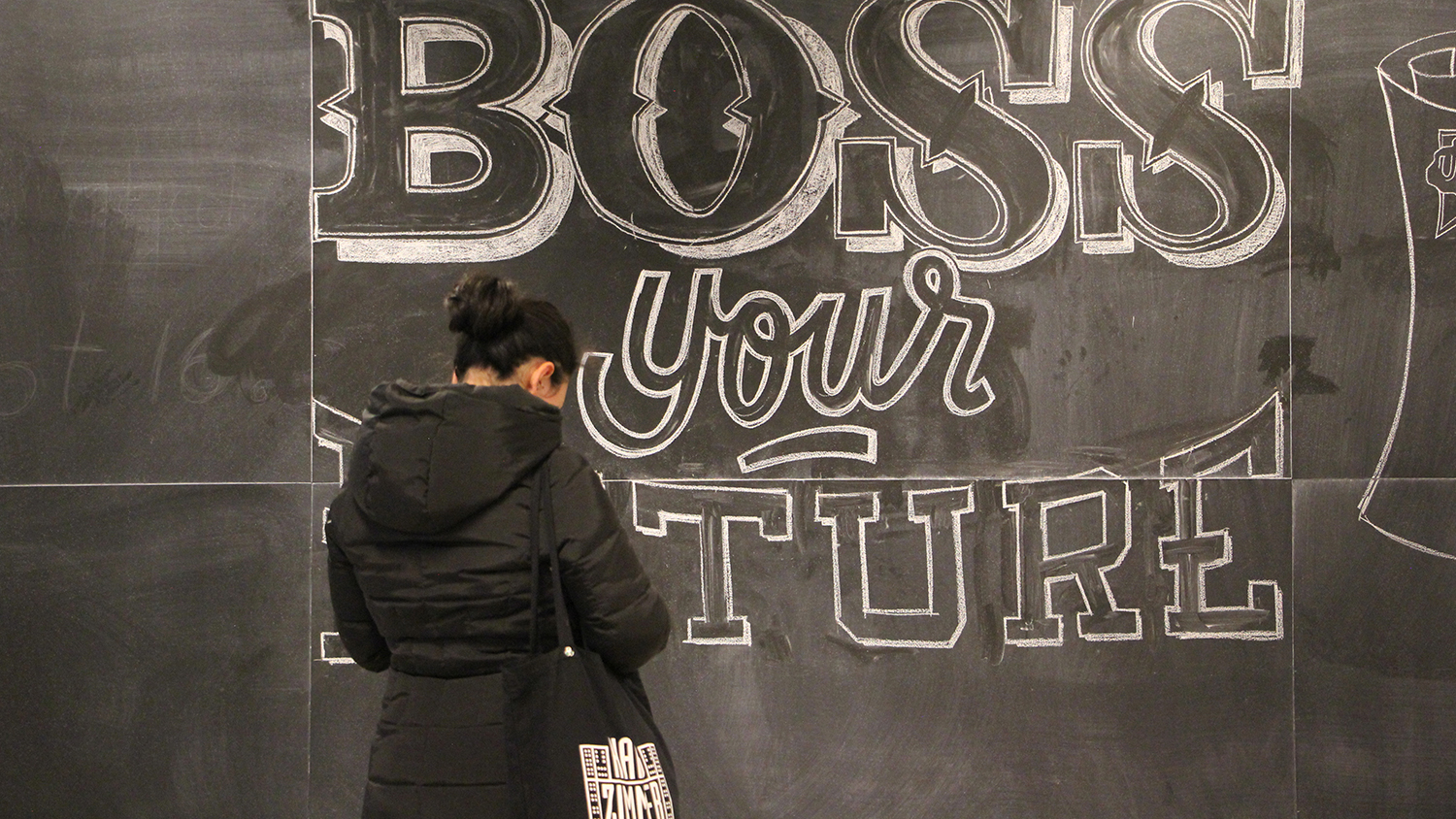 Position of women
Quotas can be a source of segregation and social polarisation. Even without quotas, you sometimes hear the question from boys and men: 'and who stands up for my rights'. Whereas feminism used to be a necessity and an honest quest for equality, nowadays it does not always evoke the same sentiments [11,12]. Do we want to turn our University into a playing field where one group has to compete against another group? What if we were selected without a label based on our own knowledge and ability, for our own skills, work ethic and motivation.

What does the introduction of quotas do with the position of women? Research shows that in some cases where women were put on electoral lists using quotas, those same women still won fewer votes than men for years.[13] Also, an unsuitable woman in the wrong place can reinforce a negative stereotype towards women instead of improving it. This shows that we cannot assume that quotas will improve the position of women in our society.

Alternative approach: Changed composition without quotas
Especially in the academic world, the memo assumes that in the Netherlands the position of women cannot be strong enough because there are not many female professors and faculty deans yet. Nevertheless, this composition may seem logical when a large proportion of the applicants were male in the past. After all, this drastically increases the chance that a man would be the best applicant in this group. A change in the composition of the professors is closely related to the composition of the academic community. Given that the composition of the academic community has changed enormously over the past thirty years, the chance that the best applicant will very soon be a woman increases as well. Whereas in 1991 only 17 percent of female PhD candidates were women, this number has been around 50 percent since 2015, and this without setting a gender quota for PhD candidates.[14] 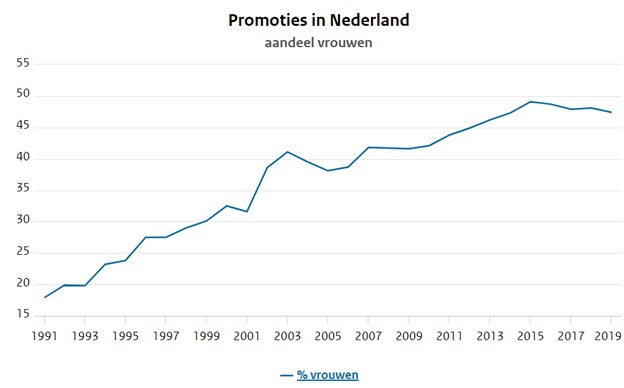 The memo indicates that women encounter more barriers than men in academia. That is why it is important to have fair selection procedures. Then, when women are suitable, they would be more likely to qualify for a position and environment that suits them with the respect they deserve. Applying anonymously, for example, could help with this, in combination with taking a critical look at selection procedures and providing information about job and future prospects. ‘What are you capable of? What do you want, and do you have the skills and freedom to achieve this?' are the kind of questions that should influence our professional development. Success must be independent of gender, but the process by which we implement this equality of opportunity must be fair so that we can really achieve a positive long-term sustainable effect.

The selection committee
The memo proposes the establishment of a quota committee. Instead, we propose that the budget be used for a selection committee that deals with diversity of thought, the development and implementation of fair application procedures, and the promotion of equality of opportunity based on individual skills in order to sustainably introduce equality into the work and study culture. This approach enables us to change the distribution of men and women, as well as other discrimination, within faculties and in other groups in an organic way. In this way, we can address unfair selection practices where they arise.

Unfair practices
Our focus should be on creating an open environment in which it is clear that everyone is equal, treated fairly, and respected. We need to ask ourselves what kind of representation and diversity we are striving for. Charities can lead to unfair practices. For us, quotas are one of those issues in which the goals cannot justify the means and for which we in the Netherlands, from a different angle, already find a better solution.