How do we get people to not only think about sustainability, but also act sustainably? The answer is nudging: subtly influencing human behaviour by means of psychological ‘tricks’. But how ethical is this type of behaviour modification really? The third edition of the Law Faculty Impact Café provided new insights.

The Impact Café is a new initiative, established by the faculty of Law of Utrecht University. It’s a part of a series of activities relating to social impact, that started with the arrival of the famous plastic whale in Utrecht’s Catherijnesingel waters. Mirko Noordegraaf, vice dean of Social Impact at the Faculty of Law, says the university has been increasingly focused on the role it plays in society. “As university, you can’t stand aside when it comes to social issues. That’s why it’s important to, aside from research and education, also work on the relevance science has for society.”

Nudging is not a means to enforce something
What is nudging, exactly? To clarify the topic, the law students organising the event had invited four experts who all deal with nudging in their daily work. They explain in detail how you can use nudging to make people separate their garbage better, make them fill out their tax return forms earlier on, and how cleverly installed pedestrian crossings can help prevent litter. In short, the speakers say there are many opportunities for nudging to help improve our society.

Nudging is not indoctrination, nor is it a means to enforce anything with, says Thomas Schillemans, UU professor of Public Administration. Nudging is: making the ‘right’ choice easier or more fun. People often make choices out of sheer habit, or without thinking. Moderator Merlin Majoor asks the audience whether anyone dares to admit they don’t always make the most sustainable choices. Countless examples from the audience follow. Some travel to Madrid by plane, another says bitterballen are too tasty to remain fully vegetarian. But then one student says that a sustainability challenge at work did eventually make him become a vegetarian. The guest speakers say this proves the importance of nudging. What it’s really about is increasing the ‘attractiveness’ of the most (socially) desired option, by making clever use of environmental factors such as social standards, walking routes, colours, or words. 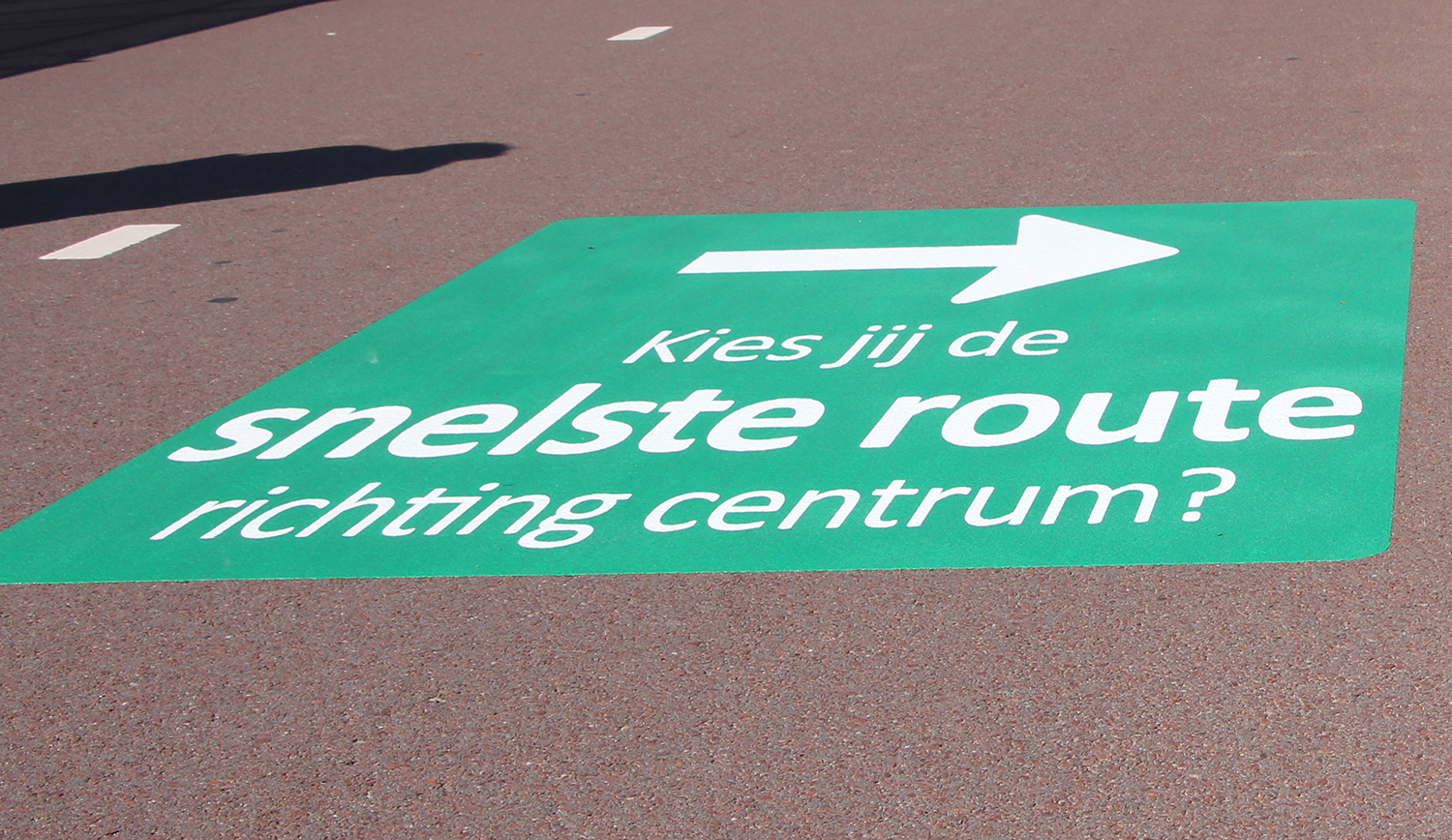 Does the government decide what’s good or bad?
But does nudging always represent the right thing? Even if the speakers themselves are enthusiastic about everything it could offer society, the audience sometimes disagrees. “It does make me slightly uncomfortable,” remarks professor Marleen van Rijswick, who’d brought the plastic whale to Utrecht. “Won’t this lead to a situation in which the government decides what’s good and what’s bad?”

The government has been doing that for ages, responds Thomas Dirkman, coordinator of the Behavioural Insights Team of the Ministry of Economic Affairs and Climate Policy, “because nearly every type of policy is about behavioural change.” Addie Weenk, coordinator Living Environment for the Department of Public Works, agrees. “Nudging is like gunpowder, you can use it for positive and negative intent. It’s mostly used for advertising at the moment. Should we not use it for a more beautiful goal like sustainability?”

Van Rijswick is clearly uneasy. “Nudging is not transparent. What if our parliament’s composition changes, and we get a government that has different priorities? They’ll use nudging too, but with a focus on those other priorities, ones we might not agree on are ‘good’ causes.” Dirkman: “There should always be a legal basis for it.”

Where are the ethical boundaries? 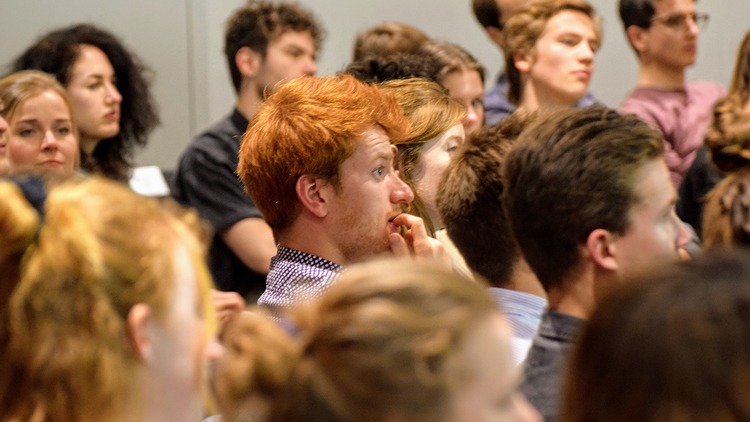 As the Impact Café progresses, more voices from the audience speak up. One person mentions the personalised prices used by website Booking.com to nudge customers, as an example of what he feels is unacceptable use of nudging. But not everyone agrees, including a website designer who’s also in the audience. “We work on this every day. This is a subtle way to get people where you want them. We do always try to be ethical in our use.”

But where are these ethical boundaries? People’s thoughts seem to vary. For guest speaker Julia Blasch, environment economist at the University of Amsterdam, a nudge is the same as a law or tax, but just a different way of encouraging desired behaviour. She refers to examples like the European energy label system, which nudges you to buy the most energy-efficient device.

Unexpected discussions
Afterwards, multiple people say they would’ve liked to have had a little more structure to the evening. “The debate went a little from pillar to post,” say Arianne and Ferike. “Part of that was because people asked a lot of questions that weren’t related to the discussion, and that made it a little messy.” Still, they thought the evening was very educational. “It’s fun to hear what people who focus on this for their work or studies think. You see how different people use one concept in entirely different ways.” 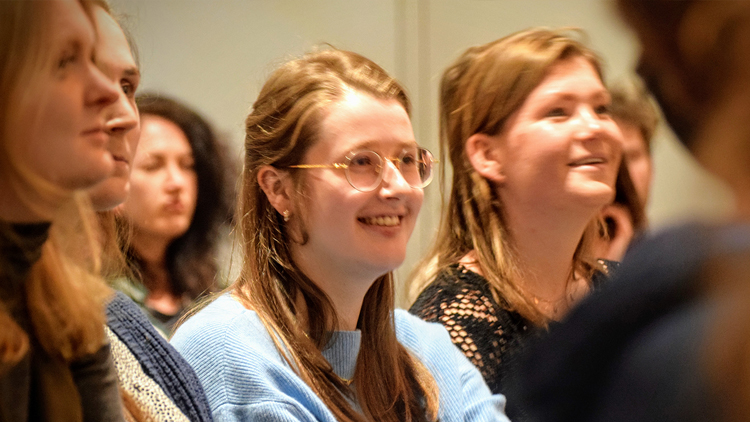 Their response matches that of most of the students present. Although everyone’s opinions are positive, many of the students mention that the common thread of the evening often seemed to be absent. But one thing everyone seems to agree upon is the added value that came from the audience’s input. Oftentimes it wasn’t the speakers who used their expertise and experiences to share new insights with the audience, but it were in fact the people in the room who did so.

A group of second-year students who’d sat in the back of the room say in a relaxed setting like this, some people may share points others wouldn’t come up with themselves. “I had expected something a little different in how it was set up,” says one of them, “but perhaps this is a better fit for this evening, because you don’t just wonder how to do this whole nudging thing, but also whether it’s even desirable to do so. It might have been better to structure the evening with some sub-topics or arguments, so you don’t get stuck on a single point for too long.”

Dialogue
The setup of this Impact Café was a conscious decision, says Rosa, one of the students involved in the organisation of the evening. “We’d discussed beforehand which direction we wanted tonight to go in. In the previous Impact Cafés, we worked with several predetermined statements, but as we had no fewer than four speakers, we wanted to create a bit more dialogue. Things did go a bit differently in the end, but compared to previous Impact Cafés, there was a lot more feedback from the audience this time.” Although most of the students who were present say the input from the audience sometimes led the discussion away from the main topic, they also say that was exactly what made them think. With this, the Impact Café’s goal, to “try to gain new insights together”, at least seems to have been successful.

The UU and social discussions
The Impact Cafés are just one of many ways in which Utrecht University is trying to connect various parties within our society. Other examples include events like the Impact Night, which this year will also have a sustainability & nudging theme; Meet the Professor, in which UU professors visit elementary schools; and the movie series Science & Fiction, organised by the School of Governance, in which movie showings are used to start discussions about social issues. Mirko Noordegraaf himself is involved with Institutions for Open Societies, in which UU researchers come together to find solutions to social issues. Since recently, the Law faculty even has its own impact board. This board’s task, Noordegraaf says, is to “put things on the agenda, inform, and advise”. Why then organise Impact Cafés as well? “They have an entirely different audience,” Noordegraaf explains. “The Impact Cafés are not aimed at social partners or scientists, but mostly on students.”
Tags: maatschappelijke betrokkenheid | sustainable | de wolkenkrabber