The UU is too white? Geographer Josse de Voogd says the university gets it entirely wrong in the presentation of its new diversity plan. “It’s nonsense to say that students with a migrant background can’t find the university.

In the Twitter storm that followed the launch of the Project plan Diversity: inflow and selection (pdf in Dutch ed.), most of the ruckus was about proposals that weren’t actually on the UU board’s agenda. Separate prayer rooms and halal canteens were things that were mentioned during meetings with students, but they were – as the university swore – not concrete plans.

De Voogd aimed his Twitter criticism at something the UU did say it wanted to do: increase the inflow of students with a migrant background. The independent researcher says the UU went wrong with the assumption that the UU has fewer ‘non-western migrants’ as students (10 percent) than is justifiable when looking at the outflow of the same group of people from Dutch vwo high school (20 percent). In calculating the latter group, the university probably included ‘western migrants’, the independent researcher concludes in an interview (in Dutch ed.) with newspaper the AD.

A painful situation ensued as the UU was forced to acknowledge (in Dutch ed.) that an overly ambitious employee had removed the text in question after De Voogd’s remarks became known. Well intentioned, but less than transparent, the university agreed.

The numbers are now being studied yet again. But UU alumnus De Voogd is urging for a public retraction. “After all, it completely blows apart the substantiation of the university’s diversity plan.”

These types of mistakes shouldn’t be made

De Voogd says a high school student with a non-western background doing vwo level in fact has a bigger chance of going to university than a native Dutch student. “Universities often say their population is too white, and they don’t know how to find us – and that’s simply not true.”

Josse de Voogd is an independent researcher and publicist. He studied International Relations in Utrecht, and then specialised in the geography of elections. He mapped large parts of the Netherlands. Earlier, De Voogd criticised the diversity committees at the University of Amsterdam, which he says made a mistake similar to the one the UU made. He thinks it’s unacceptable that his criticism barely gets any support from progressives and the universities themselves.

“These types of mistakes with data shouldn’t be made, especially at a scientific institution. I suspect people often think: never mind, it’s for a good cause, and otherwise, populist parties will go and run with it. I truly hope people at the university start conversations about this. The entire diversity discussion needs to be a lot more refined.”

You say universities are ‘too coloured’ rather than the opposite…
“They are if you compare the inflow of migrant students to the outflow of the same group from the vwo, the group of students that are able and allowed to go to university. At the vwo level of high school, around 10 percent of students is from a migrant background – that number is 12 percent at universities. The VU and Erasmus University especially have many of these students. The UU is at around 9 to 11 percent of students with a non-western background, which is a perfectly fine reflection.

“Vwo students with a migrant background, then, choose to go to university more often, relatively speaking. It’s possible they’re more motivated to use their chances. Aside from that, the university for this group of students is simply closer than it is for other vwo students. After all, they often live in the cities the universities are located in. Physically speaking, that lowers the barrier.

“Of course there are problems. But they’re not in the inflow at universities, but in the fact that a relatively low number of students from a migrant background go to the vwo, and that these students experience discrimination in the labour market after graduating.”

Why then does the idea that universities are ‘too white’ exist?
“A lot of people who live in the city, experience universities as ‘white’ because the streets are a lot more diverse. But the current percentage of students from a migrant background absolutely represents the national ratio. There’s not much you can do about that.

“Additionally, it’s nonsense to mirror a university to a city. Universities are national institutes. Twenty percent of Dutch people live in university cities, the rest doesn’t.”

Why do you resent this misconception so much?
“While the discussion constantly focuses on how we can get the inflow more coloured, there’s a group of native Dutch students – as is stated in several reports – that falls behind. With high rents and the cancellation of study financing, studying far away at university is becoming more expensive and less attractive. And we don’t have a clear image of that group of white, disadvantaged people. Those vwo students probably don’t live in Utrecht as much as they live in, say, Emmen, I suspect.

“In these types of discussions, white and coloured are often lumped together, especially now that the debate at university is often dominated by themes like ethnicity and the collective guilt of white people. There might be differences between Turkish and Moroccan students. But there are also huge differences within the white group. Perhaps there are tons of students here who were raised in the expensive Gooi area, whose parents both went to university, while students from the Limburg mining area or the Groningen peatland are highly underrepresented.” 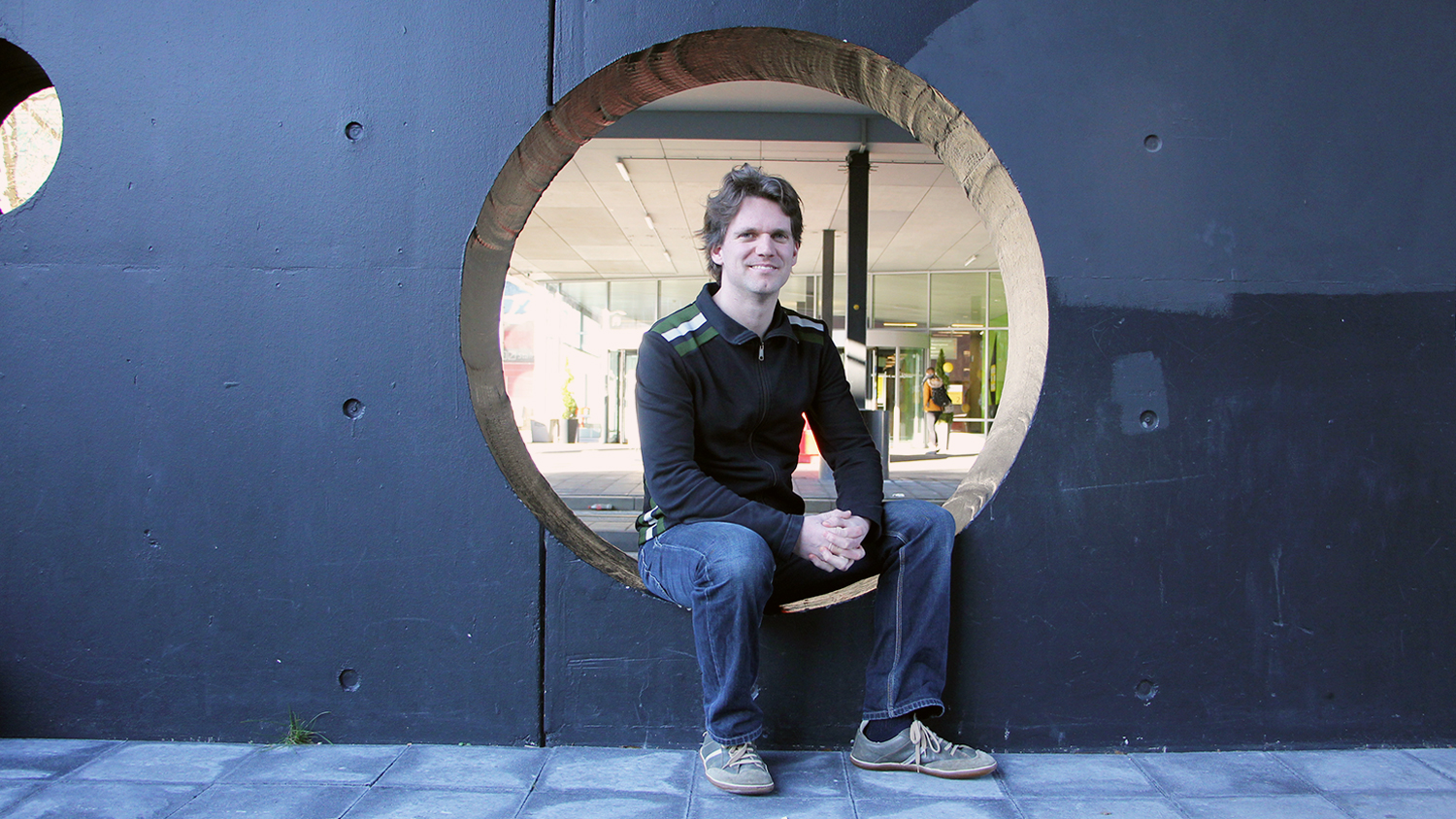 The UU project plan doesn’t focus exclusively on students with a non-western background, though? The university says it wants to study the inflow of all students from disadvantaged backgrounds…
“It does say that, but in the end it’s mostly about gender and ethnicity. Those are the visible issues. Of a white student, you may not find out as quickly what their background is. Additionally, the group that’s worried about the position of students from a non-western background, let’s say the GroenLinks liberal city people, is relatively large in university cities.”

We don’t have a clear image of the group of white, disadvantaged people

The UU says the input from multiple perspectives improves the quality of education and research. That’s not a strange reasoning, is it?
“I can imagine they feel the lack of diversity in some study programmes is a problem. Especially in ‘social’ studies, such as sociology or history, that’s a shame. Those programmes then have to shout their programmes are too white, and not that the university as a whole is too white, because that’s not true. They could take a look at whether they can encourage students from a migrant background to come to them, but that group of students simply tends not to choose study programmes with uncertain job perspectives as often.

“Additionally, you have to watch out if you’re going to take concrete measures to lower the percentage of white students. You don’t know who that eliminates. If it means young people from disadvantaged backgrounds won’t have a chance, then it’s not a good decision, and you’re losing diversity in that way.”

What should a university’s diversity policy look like, then?
“Of course there’s not much wrong with the university’s policy that aims to create a more pleasant environment in which everyone feels at home. The University of Amsterdam’s diversity research also showed that students from a migrant background did in fact encounter problems. How far you should take that diversity policy – prayer rooms or not – I couldn’t say. At the very least, you don’t want native Dutch students to drop out, because they don’t like the culture. You could say the same for – and to the same degree – students voting PVV or SGP.

“You can wonder whether creating policies that focus on the inflow of specific target groups belongs at universities. If universities start a competition among themselves to get the students from a migrant background to come to them, then there’s a danger lurking in that itself. It seems as though universities want to mirror themselves on the VU and the Erasmus University, partially for ideological activist reasons, partially for marketing and image-related reasons. If you’re so proud, as university, of your coloured students, then apparently you’d prefer to have coloured students. To me, that makes you less reliable as diversity researcher or policy maker.

“You can create the situation where it’s ridiculously busy during information markets in the urban vwo schools, and there’s no one present at schools in Emmen. It’d be better, I’d think, if the government, or an independent organisation or committee, looks at whether it’s needed and wanted to adjust the policies for the inflow at universities. We’re talking about important constitutional rights like equal treatment.”

It’ll be ridiculously busy during information markets in the urban vwo schools, and there’s no one present at schools in Emmen

Why is it evidently so difficult for you to let your voice be heard?
“I fear this has to do with the fact that everyone these days lives in their own bubbles that come with a complete ideological package of opinions. In one bubble, you have to believe people from migrant backgrounds are always disadvantaged and that it’s really important to do something about that. In the other bubble, you reject both of these observations.

“With that, it also seems to be a question of identity. If you’re among highly educated people and you say you feel something is ‘too white’, it’s almost a code to say: oh yeah, we’re part of the same group. Of course there’s also genuine concern about the position of people with a migrant background. But sometimes, I feel like there’s a leftist elite and a populist elite fighting each other over the backs of immigrants.”

DUB asked the university board to respond to Josse de Voogd’s findings. Below is their emailed response:

“Jesse de Voogd stated he can ‘imagine they feel the lack of diversity in some study programmes is a problem’. That’s exactly why we created this plan.

“In it, we’re not imposing anything top-down. We are, however, asking programmes to analyse their student population, and to see whether there’s cause to work at increased diversity. This could mean students with a migrant background, but may also be about gender diversity, first generation students, and students with a social disadvantage.

“We don’t want to impose a quota, and we don’t want to introduce favouritism to certain groups of students (that’s not even legally allowed). It’s always about talent. Sometimes you’d prefer to have a little more diverse talent, as it relates to quality of education: it’s good to bring together diverse perspectives in a work group. It can enrich the academic debate, and it’s good for all students to learn to relate to other perspectives. It also prepares students for their future careers in a pluriform society. Then, you can study the reason why certain groups of students don’t choose your study programme to apply to, and whether there are any barriers you can take away.

“It’s true that 10 percent of the UU student population consists of students with a non-western background, as opposed to 11.3 percent of vwo high school students throughout the country. There was an error in this number in an appendix of the project plan, and we’re glad that Jesse de Voogd pointed this out to us. In this, we’re a reasonable mirror of Dutch society, even if we score lower than other universities in the Randstad area. Additionally, the differences between separate UU programmes are rather big. On top of that, we’re focused on inclusivity in the broadest sense, and not just on students with a migrant background. That’s why there is justified cause to execute this project plan, together with the study programmes, who’ve already provided us with a lot of positive responses.”
Tags: Diversity | eerstegeneratiestudent