A prank war to survive the lockdown

Housemates are prone to pranking each other, that&#39;s for sure. But those are usually sporadic incidents. IBB students Roos (22) and Chris (27) got themselves involved in a full-blown prank war. In fact, that&#39;s what helped them to get through lockdown.

"This house is a ship and we're both captains", sings the Dutch duo Acda en De Munnik in their song De Kapitein (Deel II). A true soundtrack to housemates Chris and Roos, whose love-hate relationship culminated in a prank war.

The thing is: although most prank wars are spontaneous, something that comes up after a few drunken antics, for Chris and Roos this was actually a well-considered decision.

Chris challenged Roos by claiming that she would never be able to win such a war. Challenge accepted: combative as she is, Roos took the defiance as a real declaration of war. And so it started, that same night, sometime in November 2019.

To keep things somewhat civilised, the two roommates agreed upon two basic rules: no “screwing” with the bed and no pranks that would cause damage to the other person's image. There were more unspoken rules in practice, but having lived together for 2.5 years, Chris and Roos were well aware of those limits. “When you have been living together for such a long time, you just get to know each other very well,” says Chris, who thinks such a level of intimiacy is almost a requirement for a prank war like this. You must be able to tolerate each other and also dare to say when they are going too far. 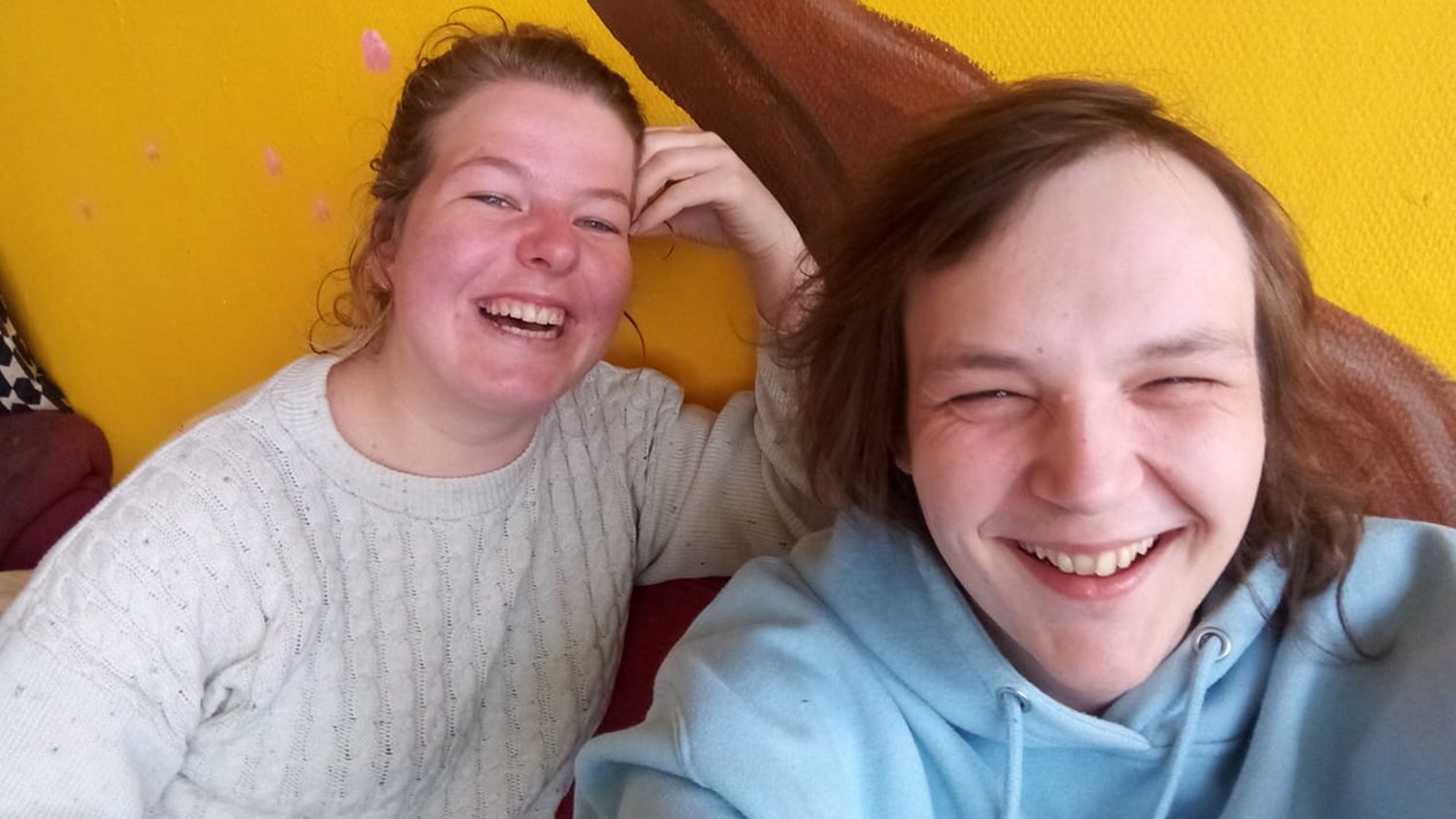 Cockfight
But how does such a declaration of war come about? Chris and Roos look at each other, chuckling. “It is actually kind of a cockfight”, answers Roos, laughing. The housemates have been evenly matched since day one. Their clashes used to be limited to discussions about topics like politics or feminism, but the cleaning schedule sometimes also led to a debate. Now, their battle to decide who is the alpha person in the house is expressed through pranks.

The rest of the house, which consists of 13 others, is not a docile pack. Rather, they're more like a jury. Before Roos pulls her pranks, she always discusses her ideas with the housemates. Only when they get a highly enthusiastic response does she actually put them into practice. Chris can sometimes count on a helping hand from the housemates as well.

Roos is certainly going to need that helping hand to outdo Chris' most recent prank. When she was finally allowed to go to the pub again last week, Chris took his chance. He got in touch with the political movement ‘Jesus Lives’ and asked if he could get some flyers, saying he wanted to spread the word of God in Utrecht. He just forgot to add that the 1,500 flyers he requested would be distributed to an area of twelve square metres, meaning: Roos’ room. When she came home in a fairly inebriated state, her whole room was covered with the screaming flyers. “I'm never speechless but, in that moment, I was silent for at least two minutes”, Roos recollects. Removing the posters from the walls was no easy task: the blue paint suffered greatly from all the duct tape Chris used. Three flyers still remain in the corner of a window, which Roos unfortunately cannot reach. 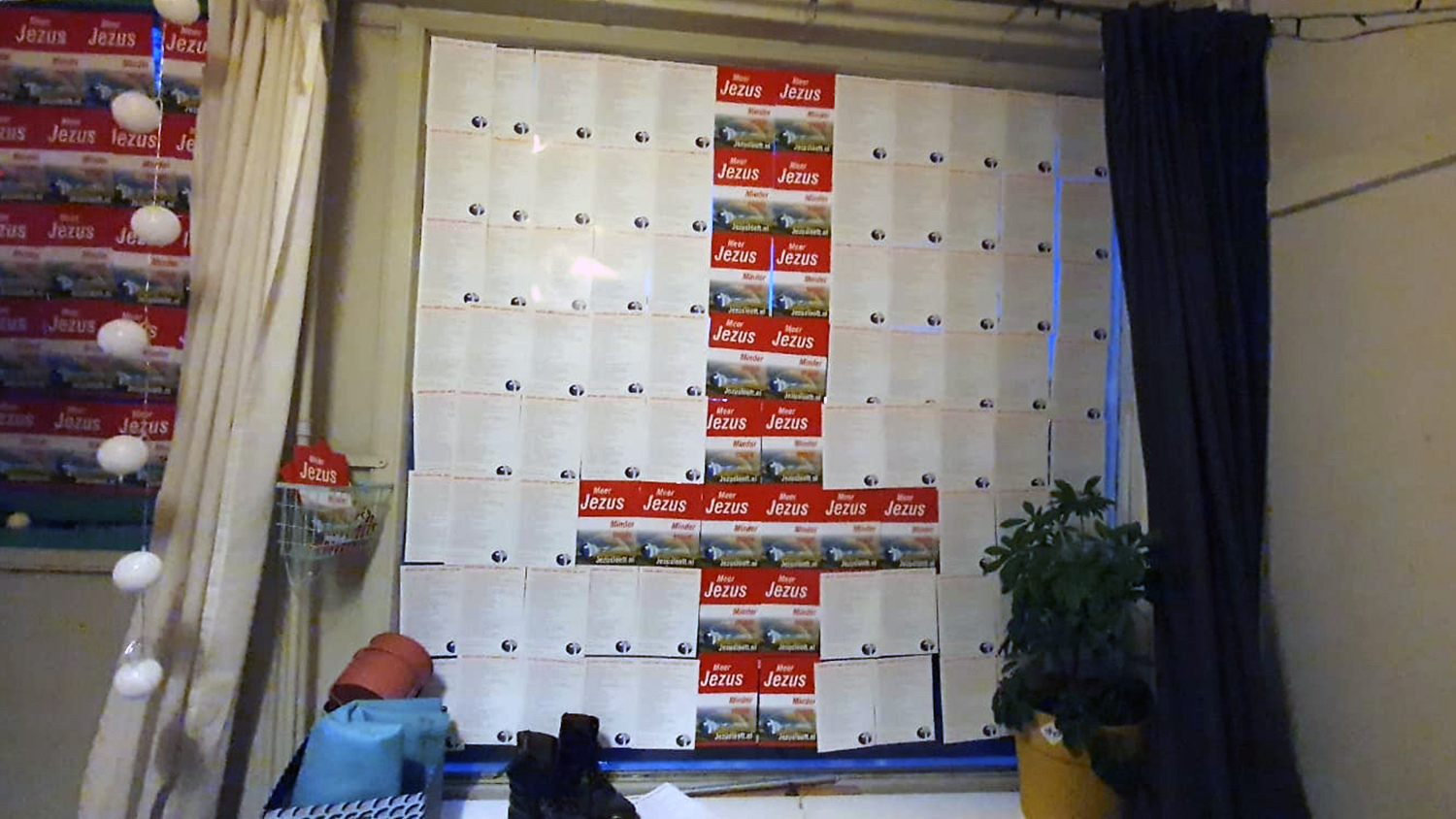 That is not the only relic of a successful prank, by the way. Roos kicked off the war by throwing a mixture of flour and water on Chris' window. The ingredients sound simple and innocent, but he has not succeeded in removing the stain yet and he didn't dare to call the SSH to ask them to wash the windows one more time. After all, how on Earth was he going to explain that? The only solution is to treat the symptoms: “I put a couple of plants in front of it now”, says Chris.

How will Chris and Roos know when the battle will have a clear winner? “When Roos gives up", answers Chris, keeping with the bellicose attitude. "Or if one of us moves”, she adds. The latter is actually already in sight, as Chris has finished his studies and will have to look for a new place to live. But, for now, the race is not over yet. Chris gives a hint about his future plans: “I am curious about how expensive it would be to have Roos followed by a Mexican Mariachi band all day...”