Rabies still poses a threat to public health – especially in developing nations. For that reason, Veterinarians Without Borders-Student is organising a Rub4Rabies in De Uithof to raise money to vaccinate dogs and cats in Madagascar against rabies. “Dogs can join the run as well.”

In depth
By Gwenda Knobel on 09/25/2019 - 13:00
Read in Dutch
Everyone is familiar with the organisation Doctors Without Borders, but Veterinarians Without Borders isn’t quite as well-known. “We’ve only been around since June 2018,” say Veterinary Medicine students Fianne Kuipers, Jolanda Nieuwland, and Simone Meijs. “Veterinarians Without Borders evolved from the Foundation Veterinary Medicine in Development Cooperation. That organisation was established in 1987; perhaps the name DIO is better known within the university.”

For those who are also unfamiliar with the name DIO: the foundation was established in the 1980s by veterinarians from the faculty of Veterinary Medicine, and was mostly run by volunteer students. In 1989, the foundation DIO joined the network Vétérinaires sans Frontières international. It remained active until last year to provide veterinary assistance, mostly to developing countries. 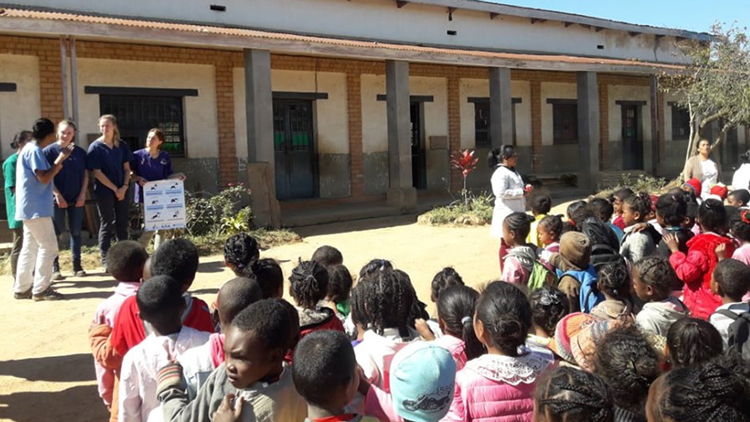 The trio, who had all been active members of DIO and are now members of the board of Veterinarians Without Borders-Student, talk about the changes. “A few years ago, we wanted to professionalise in order to reach a bigger audience and be able to help more animals. We then started to transform the foundation into a Veterinarians Without Borders organisation with a student branch. We received assistance from the Belgian foundation that had been around for years.”

Running and walking event Rub4Rabies
Veterinarians Without Borders-Student is now organising the Run4Rabies for the first time. The running and walking event has, however, been around since 2012, when it had been organised by DIO. Those who wish to join can register now, or wait until the day of – Friday, September 27. Runners can choose between 5 or 10 kilometres; the route for walking is 3 kilometres.

The money raised by the event this year will go to a project in Madagascar, where Travelling Animal Doctors vaccinate dogs and cats against rabies. The veterinarians also offer to neuter the animals at the same time. For pet owners, the treatment is free, but the materials for vets aren’t – hence the reason students are trying to raise money for this. The second goal is to make people aware of the dangers of rabies. 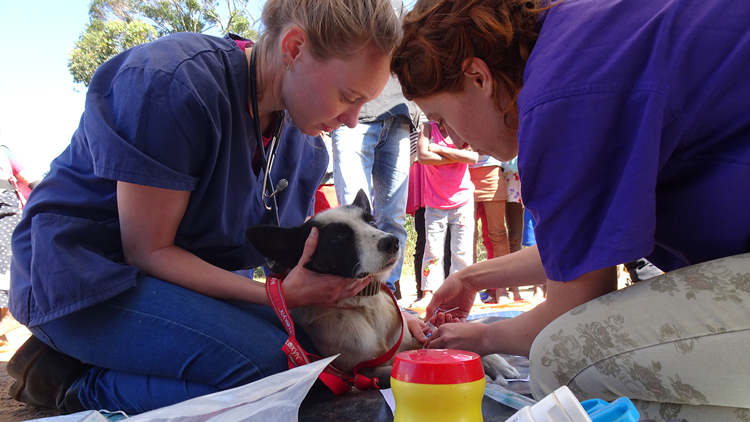 Rub4Rabies is held each year around World Rabies Day on September 28, the day Louis Pasteur passed away. Pasteur developed the first vaccine against rabies. “In the Netherlands, rabies is almost exclusively found in bats. Animals are checked for rabies at the border. However, in developing countries, many animals are infected, and it poses a threat to public health, because all mammals can get rabies. If you’re vaccinated, you’ve got 48 hours to visit a doctor for treatment, but if you’re not vaccinated and treated in time, you’ll die.”

Helping in Madagascar
To experience the work of travelling veterinarians, Fianne and Jolanda spent three weeks in Madagascar this summer to help neuter and vaccinate dogs and cats in the Andasibe area. They were based in the town Moromanga. “From there, we visited a different village every day.”

It was Fianne’s first trip outside of Europe. “Madagascar is one of the poorest countries in the world, so the contrast with the Netherlands was very big. Dogs roam the village all day long. They’re kind of like guard dogs. Owners feed them scraps of their own food, but barely pet them. Whenever we petted a dog, people would ask why we did that.”

Whilst there, they were able to see what the work of travelling vets consists of.  “They always work together with local veterinarians, and always ask them whether it’s okay for them to treat dogs there. It’s not the intent to rob local veterinarians of their income. They usually agree, though. Most people don’t have enough money to take their pets to a vet.”

Vaccinations are welcome, because people regularly die of rabies. The students were also in some dangers while working. “Because you don’t know whether the dog you’re treating is infected, the owner first has to put a muzzle on the dog. Only then will the dog be given a sedative. We had taken precautions ourselves, and had, for instance, received vaccinations for rabies beforehand.”

The students say working for Veterinarians Without Borders is rewarding work, even if they don’t receive any compensation or bursary. “In the Netherlands, health care for animals is well organised. That’s not always the case in other countries, so you feel like you can do more for humans and animals alike there.” Because that’s the – not unimportant – thought behind the projects: healthier animals contribute to better health in humans.

Want to donate or participate in the Run4Rabies? Read more here (in Dutch, ed.). 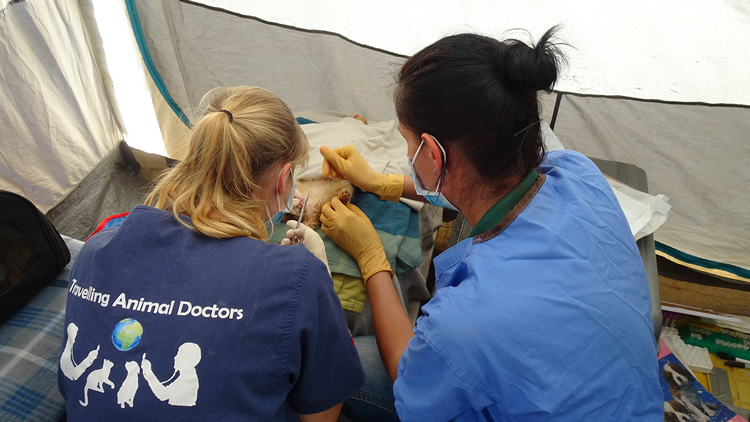 Although Veterinarians Without Borders was only established very recently, it does have several long-running projects that had been started by the Foundation Veterinary Medicine in Development Cooperation. In 2011, for instance, the foundation started an assistance programme for farmers in Malawi. Veterinarians and Veterinary Medicine students visit Malawi to train farmers to become animal health workers. Since then, locals have been trained to be able to teach the farmers. The students of Veterinarians Without Borders-Student say it’s a rewarding project. “If the care for farm animals improves, it doesn’t just mean a better life for the animals, but the animals yield more as well – whether it’s meat or milk.”
Rabies
Rabies is found all over the world. Every mammal is susceptible to the disease. Those infected need to be treated as quickly as possible, as the virus multiplies itself at extremely high speeds, and can cause death. In the Netherlands and most other western European countries, rabies has become fairly rare. In the Netherlands, the disease does still occur among bats. There are strict rules for importing animals in order to ensure the disease doesn’t have a chance to spread. In other countries, rabies is much more prevalent.

Worldwide, 50,000 people a year die from rabies. In the Netherlands, five people have died from rabies in the past 40 years. All these patients were infected abroad. In western Europe, a less infectious strain of the rabies virus is often found in bats. This rarely leads to infection in humans. (Source: RIVM).
Tags: faculty of veterinary medicine | veterinarians without borders student | ontwikkelingswerk | health