Attending classes on campus, going out, practicing sports, going to parties at student associations – all this without the 6 feet (1.5-metre) rule. Students’ schedules are filling up again and, suddenly, they&#39;re finding themselves juggling their between their work, their appointments, and their QR codes. First-year students seem to be struggling the least with this turbulent transition, DUB shows.

On March 12, 2020, it was announced that all classes would be suspended until further notice. Utrecht University cancelled all meetings from Friday the 13th on. Some bars and student associations had already closed their doors by then, due to the quickly-spreading coronavirus, but many others were still open. Most students expected to be back in the lecture halls soon enough, so they enjoyed the freedom as long as it would last. But when every single social activity was cancelled, and the Netherlands entered its first lockdown, the benefits of attending classes in person dawned on them. They couldn’t wait for universities to open their doors again.

That day finally came a few weeks ago: classes on location were allowed once more. It was even okay to have more than 75 people in a single room, without a distance of 1.5 metres between them, and without face masks too. Students are back to rushing to get to school on time in a somewhat presentable fashion, and the comfortable joggers can finally go to the laundry basket. How are students experiencing this transition?

1.5 metres
Tram 22, from Utrecht Central Station to the Utrecht Science Park, is challenging for everyone who would prefer to keep a little distance from others. Riding that tram means standing closer to other people than you would in a crowded bar. “I always take a tram or two earlier than necessary, doesn’t matter how early it is,” says David, a second-year Pharmacy student. “I think it’s still dangerous, even though I’m vaccinated. It’s just annoying. Even without Covid, I’d still leave home earlier to avoid the rush hour.” 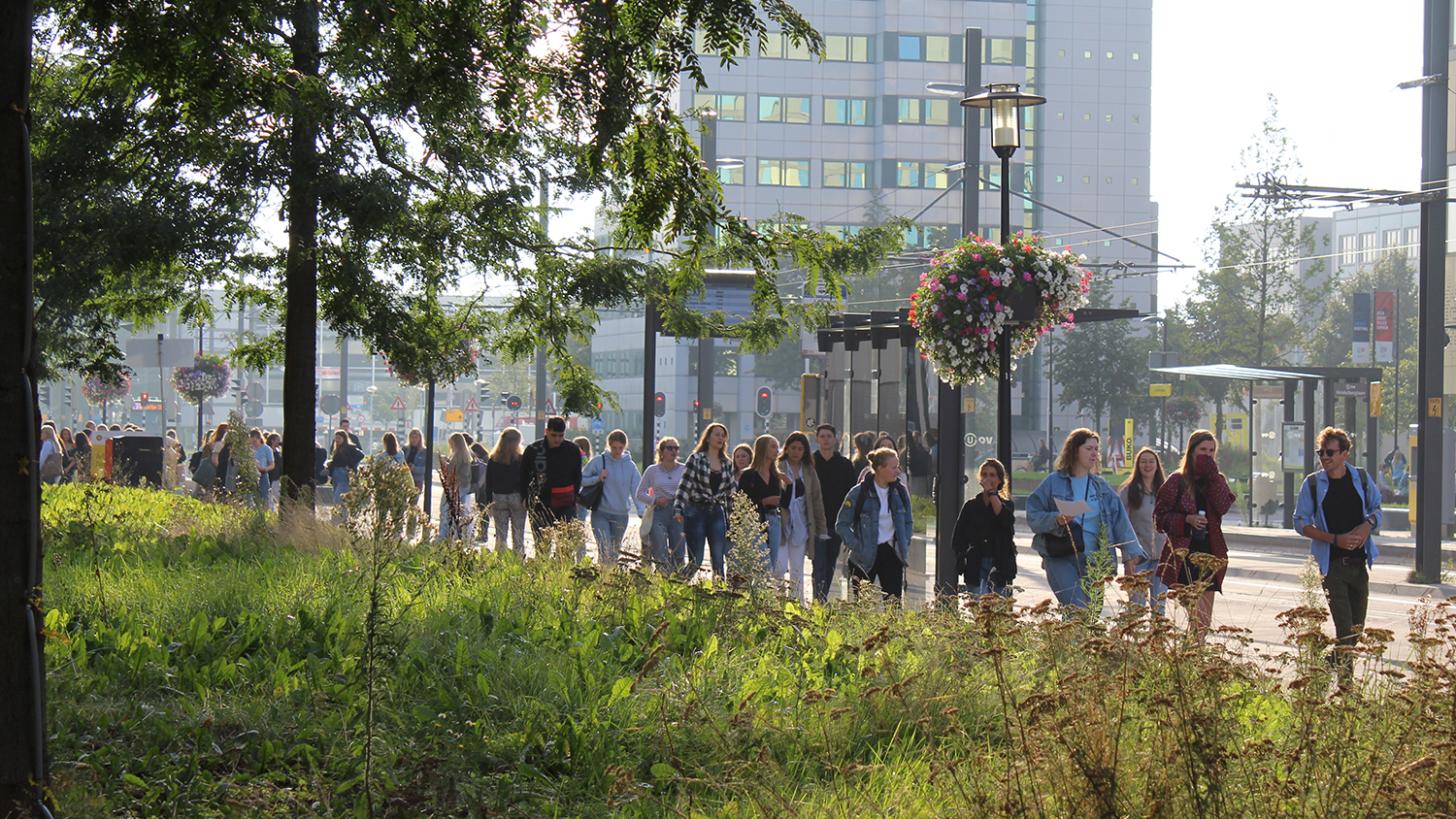 Fatima and Ilham, two of David’s classmates, feel differently. Ilham is from Rotterdam and has to take the tram to Utrecht Science Park every day. Fatima, who lives in Utrecht, waits for Ilham at the station to join her. They're so happy to be together that they’re not bothered by the crowds.

The switch to full lecture halls is a little less dramatic, because the windows there don’t fog up from the breath of so many humans. Janneke, Master’s student of Planning, got used to having so many people sit close together after a single day. “Last year, I got chills watching YouTube videos of festivals. Now, I think everyone’s just done with that 1.5-metre rule.”

Being social again
Most responses show that students are eager to return to class. For many, the social aspect of going to college is at least as important as what they learn there. Take for instance Svenja, a first-year MBA student, who has lunch with a group of peers every day. “I couldn’t wait. The social connections motivate me. I think we’ll become great friends.”

Others think the social aspect of returning to campus is frightening. Ellen is one of them. This international student of History feels uncomfortable to have to talk in the presence of large groups of people. She says that’s only gotten worse after Covid. Large-scale classes on campus are okay because she likes the anonymity. It’s easier to remain in the background, and focus on the curriculum.

Some benefited from the step-by-step transition from small-scale to large-scale education. “This past year, our practical sessions were held in small groups,” says Jaap, Biology student. “That gave me enough confidence to speak up in larger groups, for instance by asking questions during the lectures.”

On-campus classes
Most students we interviewed are less enthusiastic about in-person lectures than they are about smaller work groups. Although they feel like they focus better when attending classes in person, many also saw the benefits of having online classes this past year. Functionalities like pausing, speeding up, and skipping parts are missing in live lectures.

“Teachers often discuss the material at such a high speed that I can’t keep up,” says Lilli, a second-year Pharmacy student. “At home, it takes me a little longer, but I understand it better.” That’s different when it comes to work groups, which are all about interaction. Most find it easier to formulate questions orally than through a keyboard. Moreover, group processes run more smoothly when you’re in a room together instead of communicating online.

Fomo
Although you may have yearned for group work during lockdown, everything’s reopening at once now. You can work out at your sports club again, visit your student association, or go to dinners. It’s an abrupt transition from a world in which nothing was allowed to one where you’re expected to have a full schedule all of the sudden. That can cause stress. “Knowing and communicating your boundaries, that’s key,” says Laurine, third-year Medicine student. But that's easier said than done, of course. “Last week, I came home at 11.30pm and my roommate shouted ‘why haven’t you cleaned the kitchen yet?’. When I showed her my schedule, she thought I was demanding too much of myself. Maybe that’s true, but I just don’t want to miss out on anything now that we're allowed to do things again.” 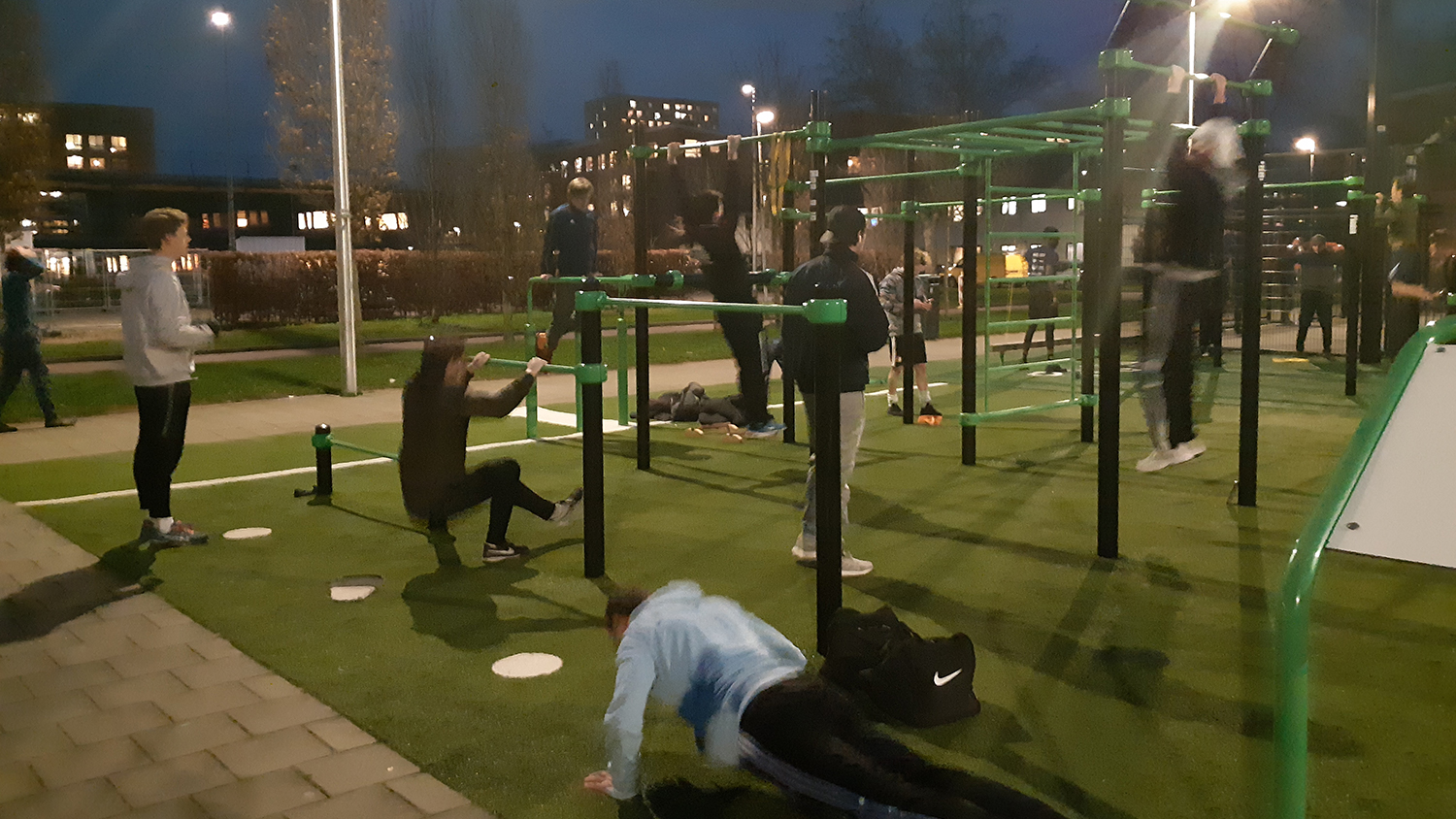 With all those activities during the day and night, housemates find it hard to dine together. Leah, who lives at IBB, thinks that a transition was sorely needed. “I think it’s pretty unhealthy to spend so much time in a single living room together. Having classes on campus and other activities indeed means we’ll see less of each other, but I think that’s only beneficial to the atmosphere of the house.”

Müberra and Eilaria, two second-year Biology students, are clearly unafraid of facing unvaccinated fellow students. “I’m not vaccinated either,” Eilaria says. “Stay away from me!” her friend play-yells, making them both laugh. But for others, it’s a serious topic.

“I think it should be mandatory,” says Kees, a fellow Biology student. “We, as highly educated people should take our responsibility, because we’re able to understand how vaccines work and why they’re necessary.”

The average opinion is somewhere in between. Students tend to prefer that everyone gets vaccinated, but it should be of their own volition, not an obligation. That’s the most common point of view on mandatory vaccination for classes. Most people are in favour of a compromise with additional testing, and distance for the unvaccinated. “They also have a right to good education.”

First-years
The transition in September used to be harder for first-year students, but the opposite seems to be the case now. The rules had already been relaxed in Dutch secondary schools, so the current first-year students spent most of last year in full classrooms already. The interviews show they no longer consider physical contact as abnormal anymore. Moreover, they don’t know what it was like at the university before and during lockdown: everything is new to them.

“It’s nice to be able to take off the face mask,” says Yannick, a first-year IT student. “I still catch myself wanting to grab it from my back pocket every time I enter a building. I hope I’ll get rid of that habit soon.”

Many think meeting new people is exciting and a little scary, but that’s normal for first-years. At the same time, they can’t wait to start this new phase of their lives. Now that classes are starting, and students are able to connect in different ways, there are plenty of ingredients to make it a beautiful chapter of their lives.