Number of female professors rises in the Netherlands, but glass ceiling far from gone

Image source: Monitor of Women Professors by LNVH. Percentage of women in each position within a university.

Building an academic career in the Netherlands is harder for women than for men. The proportion of women occupying the position of professor is rising steadily, but the glass ceiling has not disappeared yet. That&#39;s per the latest monitor of the Dutch Network of Women Professors, which indicates that moving up from assistant professor to associate professor is particularly hard for women.

In September, news agency HOP reported that the proportion of women professors had exceeded 25 percent for the first time in the history of Dutch academia. The new monitor of the Dutch Network of Women Professors confirms that (report in Dutch only).

However, the monitor also takes into account the intermediate steps necessary to get a professorship. Do women actually get the same ammount of opportunities that men do throughout their careers? In order to measure that, the authors use the so-called glass ceiling index, meaning the ratio between the number of women in two adjacent job groups.

Huge step
Being promoted from PhD candidate to assistant professor (which usually happens through a postdoc position) is just as difficult for men as it is for women. So, there's no glass ceiling there. But, in subsequent positions, there is.

The threshold between the position of assistant professor and associate professor is higher for women than for men. In general, men also have the advantage in the progression to professorship, according to the index.

A striking fact is that, on average, women professors have a contract for more hours than their male counterparts: 0.87 versus 0.84 FTE. Over one hour more, therefore. In the positions underneath, the opposite is the case.

Women also hold temporary contracts more often, especially as assistant professor: 31.6 percent of the women have a termination date in their contracts, as opposed to 26.8 percent of the men.

No rise in Utrecht
The monitor also indicates the increase in the number of women holding professorships per university. The Dutch university with the highest proportion of women among their professors is the Open University, with 42 percent, followed by Maastricht University, with 32.6 percent. TU Delft is at the bottom: only 17.9 percent of their professors are female. Utrecht University maintains the fifth place with 28.3 percent. 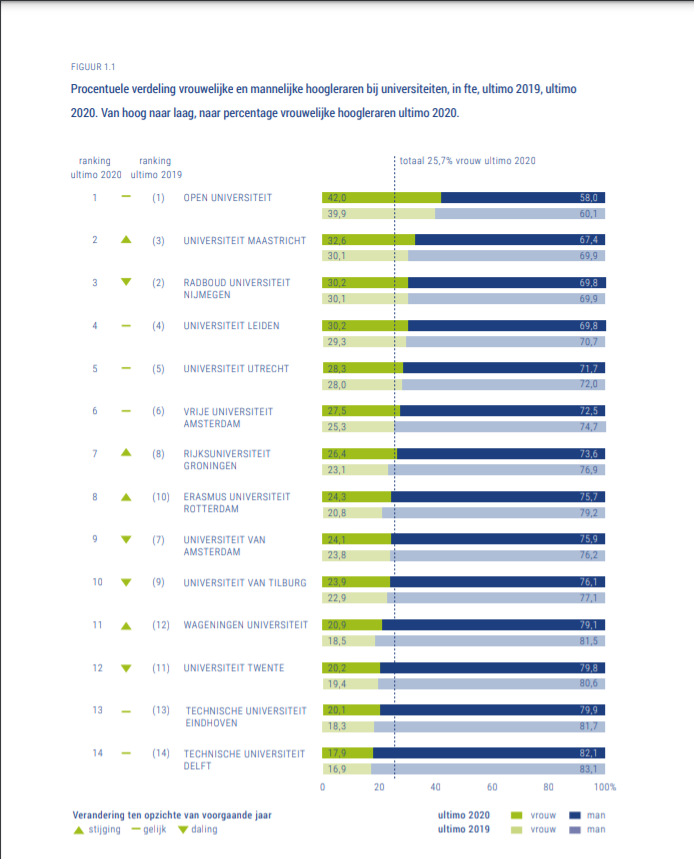 Source: Monitor of Women Professors, LNVH. Percentage of women professors in 2019 and 2020.