Percentage of female professors up sharply

Dutch universities are employing more and more women as full professors. Women now occupy 23 percent of professorships, according to the latest figures, which means nearly one in four. There are, however, considerable differences between universities.

Dutch academia has never been a bastion for female talent at professorship level, but that situation is gradually changing. The Open University leads the way: 35 percent of its professors are female.

Erasmus University Rotterdam brings up the rear: only 15 percent of professors there are women. The percentages are not much higher at the Netherlands’ four universities of technology.

All universities report a rise in the proportion of female professors, except Wageningen University, which has been unable to break through the 17 percent mark.

Not just more female professors
University professors have always been the subject of considerable scrutiny. Diversity targets have been agreed. Some progress has been booked in academic appointments below the lofty rank of professor, though less pronounced.

Forty-four percent of PhD students are women, a figure that has remained stubbornly stuck for years. More women hold a position as assistant professor than in the past, but the increase is not as strong as among full professors. The proportion of female associate professors has even decreased. 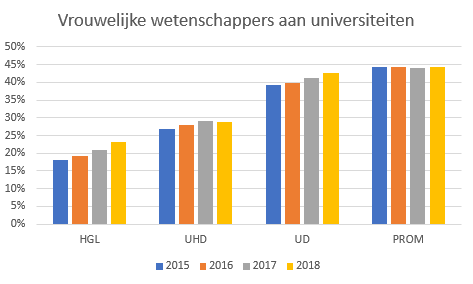