Salad belonging to the vegan lunch, served during a tasting of Eurest, pictures UU

Not one but two parties will succeed caterer Sodexo at Utrecht University. Caterer Eurest will take care of most of the university restaurants plus the lunch meetings. Spar University will provide lunch at a minimum of two locations, "but hopes for a third". With these two parties, the supply per canteen can vary greatly

Not one but two parties will succeed caterer Sodexo at Utrecht University. Caterer Eurest will take care of most of the university restaurants plus the lunch meetings. Spar University will provide lunch at a minimum of two locations, "but hopes for a third". With these two parties, the supply per canteen can vary greatly.

On 8 July 2020, the contract with Sodexo, which has been the caterer of Utrecht University since September 2012, expires. In total, the company ran nineteen restaurants. In October 2019, the university announced the closure of seven locations. "There are more locations than there is money to be made", explained Merijn Smelt of the Facility Service Centre of UU at the time. Moreover, the university had to put out a new tender for the catering and feared that no caterer wanted to man nineteen restaurants.

Even before the university buildings closed their doors because of the corona measures, the curtain fell for six locations. Earlier than expected. The reason: Sodexo was able to redeploy their employees elsewhere within the catering company. It turns out to make sense: Sodexo had not applied for the new tender. Eurest, which is part of the Compass Group and also takes care of the catering at the Vrije Universiteit in Amsterdam, did. Eurest will cooperate at UU with Spar University, a supermarket chain that can only be found on campuses of universities of applied sciences and universities.

Half of the canteen supply is vegetarian. 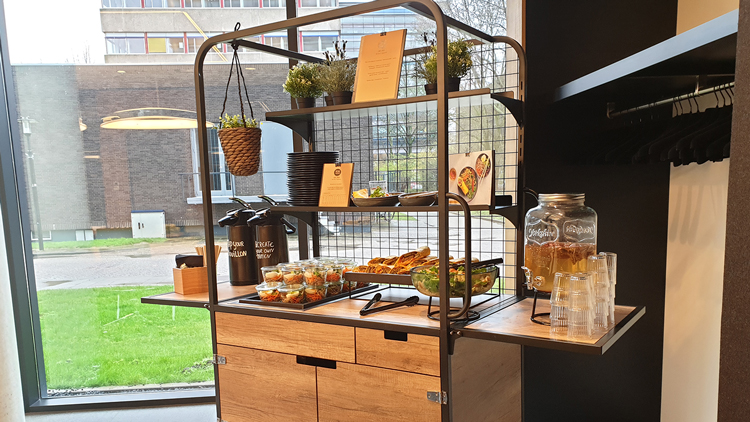 The university says to be very happy with the arrival of the new caterer. Anna Stamp-Jongbloed of the Facility Service Centre says the university has deliberately kept the programme of requirements for the new caterer concise, in order to give smaller entrepreneurs such as Spar University a chance. "For example, we didn't make fixed-price agreements for products." With this, she refers to agreements from the past that prescribed which basic products had to be sold for what price. Whether this means that hungry UU students and staff have to pay an insane amount for their lunch is unknown. "What Eurest is going to do with the products and how they are going to price them is not yet clear, it could also be cheaper."

The university does have other conditions, says Stamp-Jongbloed. For example, the new caterer must meet sustainability requirements in terms of logistics, water and energy. The origin of products must also be traceable and these must come from sustainable entrepreneurs. In addition, one of the requirements was that at the start of the academic year half the supply must be vegetarian or vegan.

With the arrival of the new caterer, there may be differences between the canteens, says Stamp-Jongbloed. This is because Spar University will manage a number of locations and because caterer Eurest will be able to adapt its assortment per location to what customers would like to eat. "That's the advantage of working with the new caterers. Among other things, they have a good eye for the to-go supply," says Stamp-Jongbloed.

Renovations and a doggy bag 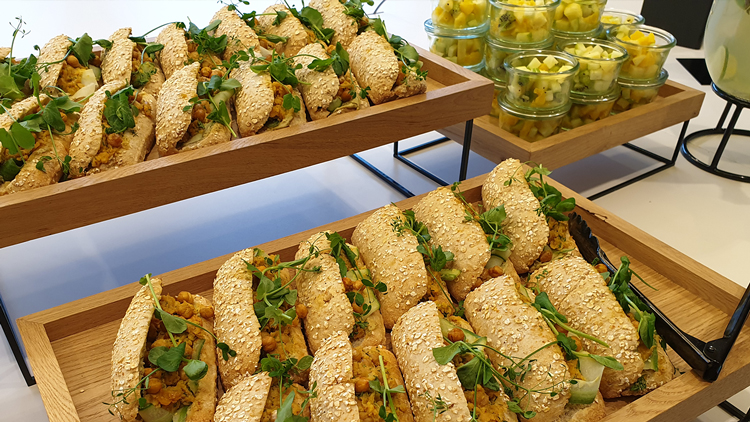 Initially it was agreed upon that Eurest would man ten canteens and Spar University two. The supermarket will be located in the former kiosk in the Koningsberger building in De Uithof. The second location will be in Madame Jeanette in the Jeanette Donker-Voet building on the grounds of Veterinary Medicine. Products such as sandwiches and soup will be offered here alongside other products in a so-called grab&go wall. Customers will have to pay for their products at the self-checkout.

In the Utrecht Science Park, Spar University has a supermarket under the Langeveld building and two mini shops. These can be found in a building of Utrecht University of Applied Sciences on the Heidelberglaan and in the building on the Bolognalaan that UU shares with the HU. The latter location had just opened when, due to the measures surrounding the coronavirus, education was continued online and the location had to close again.

Eurest will be at the other locations. These are more well-known formulas where you collect your lunch on a tray or pick it up at the counter. "The current seating areas of the restaurants will remain," says Stamp-Jongbloed of UU. Evening meals will be available at the Educatorium in De Uithof and at University College Utrecht. Lodewijk's product supply at the University Library in the city centre will be expanded.

Eurest will also provide lunches for university meetings. Just before the university closed the premises, there was a tasting with employees. The lunches got good grades, says Stamp-Jongbloed. "There are four packages to choose from, but there could be more in the future. The average grade of the basic lunch was an 8, that of the luxury lunch a 7.7." At lunch, a doggy bag will be supplied, so that any remaining sandwiches can be taken along. 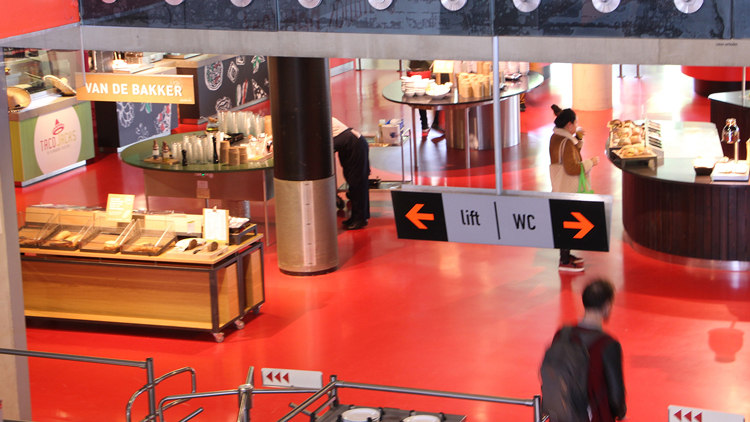 Because UU is in agreement with Eurest and Spar University, they say goodbye to Sodexo. The names Jazzmans in the Minnaert building and on the campus of UCU also disappear.  "That name belongs to Sodexo," says Stamp-Jongbloed. The location in the Minnaert building will be called Café Minnaert, that in UCU Café UCU. Gutenberg, under the University Library in De Uithof. will keep its name, because it is not linked to any Sodexo formula.

All canteen locations in the city centre, the International Campus and Utrecht Science Park will be renovated. When this will happen is unknown at the moment. Under normal circumstances, this would be in the summer, but in view of the corona crisis there is nothing to say about that at the moment, reports UU.

Sodexo employees who work in university buildings will continue to work for UU. They will be taken over by the new caterer if employees so wish. Many of the faces in the canteen are familiar within the university and sometimes have been serving lunch for decades. Some of them were employees of Utrecht University before the catering was outsourced

Eurest in cooperation with Spar University 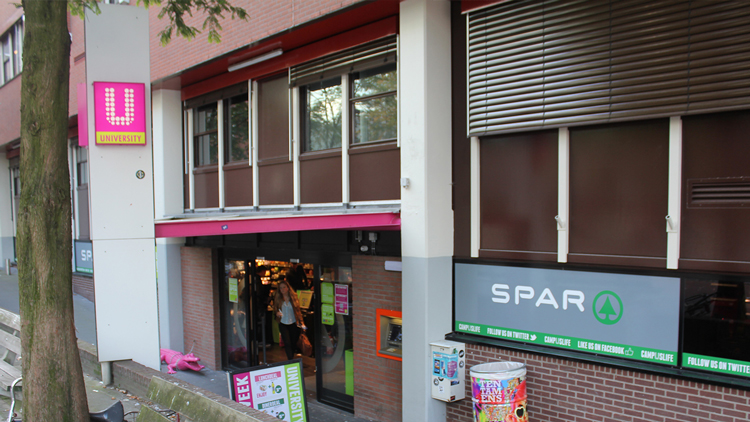 As it looks now, Spar University will take care of the kiosk in the Koningsberger building and the restaurant in the Jeanette Donker-Voet building. "We really want to do this," says Kyra van Elswijk of Spar University. A possible third location is still being considered, she says. "Eurest is discussing this with the university. Eurest is the main party."

Spar University is separate from the supermarket chain Spar. "Spar University has ten branches, three of which are in De Uithof." The other seven branches can be found on other university campuses in the Netherlands. Spar University is going through a difficult time, says Van Elswijk, now that all locations have had to close because of the corona crisis. "We have to wait and see what this crisis means financially for us, because from a considerable turnover, we have fallen back to a turnover of zero. Although we are appealing to the emergency fund, we are not sure what the exact consequences will be for us".

How Eurest is holding up in the current crisis and which plans they have exactly for UU is unknown. We haven't been able to speak to a spokesperson yet. However, if you look at the company's website, you will see that the caterer, in collaboration with the University of Wageningen, has developed sustainable dishes that contain more vegetables and less or no meat. The caterer is also committed to preventing food waste. According to Van Elswijk of Spar University, Eurest aims for a "hospitality experience and high-quality meals".