Geo’s finally have a shared home

Visitors got a tour on Friday of the new building. Photo's: Bas van Hattum

In the last couple of months, the employees of the Faculty of Geosciences have moved into the new Vening Meinesz building. The official opening took place on Friday.

“Who came by bike? And who came by public transport?” Vice-dean and ceremony speaker at service Hans de Bresser gauges the mobility behaviour of his public at the beginning of the opening ceremony of the new Vening Meinesz building. This turns out not to be an issue. “You are now all officially friends of this faculty.”

The search for sustainable solutions for the major challenges in this world is a central notion within the research of the Utrecht Faculty of Geosciences, De Bresser emphasizes. The new accommodation of the faculty must of course also radiate this notion. Many wishes, in terms of energy supply, climate control and material use, have been granted. The office building has been given the Excellent sustainability certificate within the, in the construction industry well-known, BREEAM system.

The new building also offers a shared home for the two blood groups within the faculty for the first time: earth scientists and social geographers. Dean Piet Hoekstra looks back on a turbulent history of housing that ended in two separate worlds in De Uithof. The red brick Earth Science building in the Noordwesthoek and the high Van Unnik building in the central area. Both buildings were no longer adequate. The Earth Science building is being demolished, the Van Unnik is now empty and it is not known what is going to happen with it.

Hoekstra announced earlier this month that the completion of the new building was a good moment for him to resign after eight years as vice-dean and dean. With the construction of the Koningsberger building and the renovation of the Minnaert building, important steps had already been taken to improve the educational facilities for students.

The opening was in good spirits. Applause sounded when President of the Executive Board Anton Pijpers congratulated those present with a second place in the Shanghai ranking. Only Oxford scored better in the ‘geography’ category. Things are going well with the Faculty of Geosciences, which is actually growing so fast that the new building may soon become too crowded, as was warned.

For some, it is still a matter of getting used to the open work places in the corners of the buildings. These are intended as flexible workplaces, but are still not used as such very often. Students must now report at the door downstairs as well. But in general, most geo-employees seem satisfied with their new workplace near their important research partners such as TNO and Deltares. It was also made clear that the heat in the building this summer was mainly due to the fact that the climate control system needs four seasons to get properly adjusted. However, it was joked that “compared to the Van Unnik building, everything could be seen as a step forward.”

As an official opening gesture, a plaque was unveiled, a replica of a bronze plate that once hung on the Drift. This is where the namesake of the geo building Felix Vening Meinesz once worked. The plaque, with a reference to the submarine expeditions that the prominent geologist undertook, could not be found for a long time. Ultimately, it was found in the Delft university museum (Science Centre Delft) where Vening Meinesz also held the position of professor by special appointment. The bronze plate will get a prominent place in the new building next to a world map with the wanderings of the building's namesake. 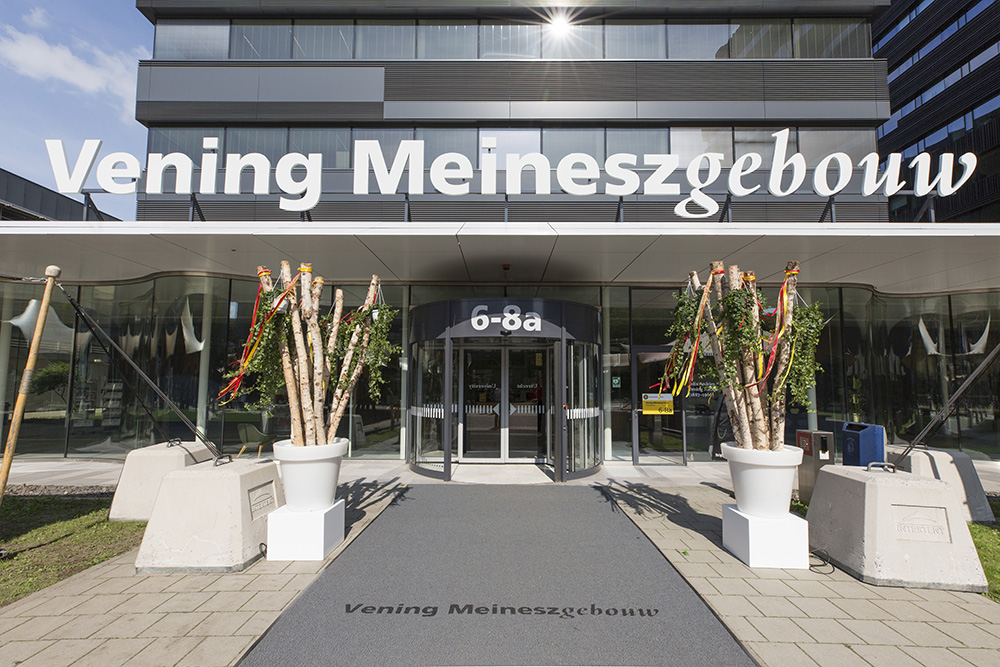