This spring, students had to battle against stress, sleeping difficulties and extreme fatigue. They also drank and smoked cannabis a lot. The outgoing government wants to tackle mental problems “as a matter of the utmost urgency”.

“Very worrying” is how the government describes the results of the first ‘Monitor of mental health and substance use among higher education students’, which has been compiled by the Trimbos Institute, the RIVM and the GGD.

This spring, 28,000 students from seven universities of applied sciences and eight research universities were questioned about their health and substance use. The survey was carried out at the time of the curfew and the closure of hospitality venues during the third wave of the coronavirus pandemic.

Weary of living
Two out of three students felt emotionally exhausted at that time. A quarter were weary of living and sometimes wished they could go to sleep and not wake up again. Four percent even had that wish frequently.

More than one in four students drinks excessively or heavily. Excessive (11 percent) means more than 21 glasses of alcohol per week for men and more than 14 for women. ‘Heavy’ drinkers (16 percent) consume six glasses (men) or four glasses (women) at least once a week.

Cannabis appears to be pretty well accepted among students. One in three have smoked cannabis in the past twelve months and eight percent do so every week. The researchers looked at other types of substance use and addictions, gaming in particular: five percent spend too much time at their gaming consoles. 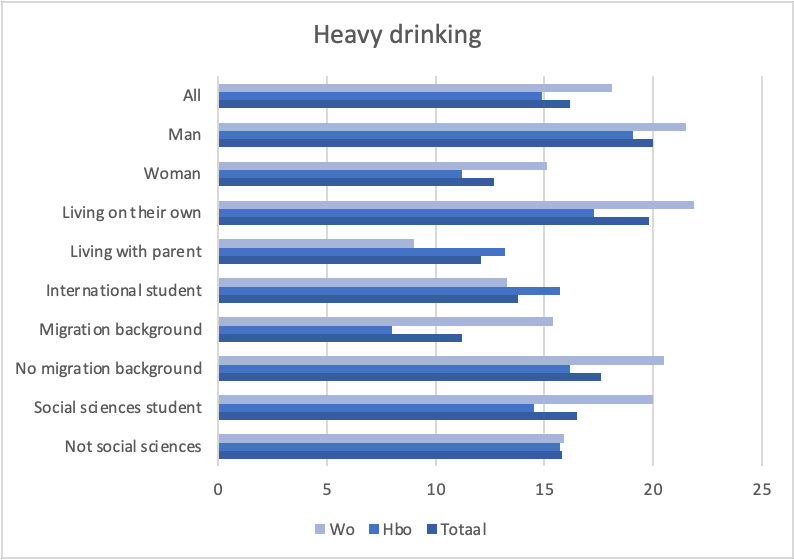 Large-scale survey
There were concerns about the mental health of students even before the coronavirus pandemic broke out, especially because of heavy study loads and rising levels of debt among students. This survey was announced at that time. This is the first time that students’ mental health has been investigated on this scale.

It emerges that those with high levels of debt from their studies use more substances. The researchers say that this is very worrying, even though they are unable to relate cause and effect.

Sixty-two percent of students experienced stress in the four weeks prior to filling in the questionnaire. Among more than half, this was caused by the coronavirus crisis, but an even larger number (72 percent) blame the stress on their studies.

The researchers recommend an approach that involves substance abuse prevention among students, with a specific focus on groups such as international students and students with an impairment, who appear to be extra vulnerable. Educational institutions ought to pay more attention to students’ mental well-being as well

Student financing
“It is of course likely that the complaints are related to the coronavirus pandemic and the associated measures”, Education Minister Ingrid van Engelshoven and State Secretary for Health Paul Blokhuis write in a letter to the House of Representatives.

According to these two government members, however, the report raises questions about how the education system is organised and financed. “The financial situation of students and their prospects on the labour and housing market can also play a role”, they argue.

The government is going to hold talks with the institutions about a suitable approach. The survey will be repeated in two years’ time to see how things are going with students then.

Alarming
The viewpoint of the student organisations, which have been sounding the alarm for years, has now been confirmed as correct. “It’s alarming to see that so many students are having difficulty making ends meet”, says Lisanne de Roos, chair of the Dutch National Students' Association. “After today, nobody can ever say that mental problems affect only a small number of students.”

The Dutch Student Union is shocked too. “Your student years should be about personal development but the opposite is the case: students are succumbing to the pressure to perform. That is extremely worrying”, says chair Ama Boahene.

She stresses that more needs to be done for the mental health of students. “Solutions that are currently being put forward are generally no more than palliative, whereas preventive policy is needed. Systemic causes such as the pressure to perform, loneliness and the loan system must be tackled. That is a responsibility that is shared by educational institutions and national politics.”

Extra student psychologists
The Association of Universities in the Netherlands, VSNU, recognises the “worrying picture” emerging from surveys of students’ mental health carried out by universities themselves. “The coronavirus period is hitting many students very hard. That’s why in recent times we have also been emphasising the importance of face-to-face teaching.”

The universities have recently taken on extra student psychologists and they are endeavouring to provide better information.

Previous findings
The findings of this research echo the ones announced by Statistics Netherlands in September, according to which one in four young adults was "psychologically unhealthy" at the time of the measurement, which was made in the beginning of 2021.

Another survey, conducted last summer by DUB in collaboration with other university media, also pointed out that many students were struggling. Half of the respondents of that survey declared that the pandemic had dealt hard blows, mentally.

UU has been following its students' mental health closely throughout the pandemic, through surveys and other methods. The latest report, about Block 4 of the last academic year, revealed that the lack of contact and interaction with fellow students and teachers "still played a significant role". Those students are worried about their social contacts, grades and progress in their studies.

According to the university, there are, therefore, more than enough reasons to keep supporting students, both socially and with their studies. That's why a series of measures have been taken in that sense in the past two years.

With the means provided by the National Education Programme, even more help is on the way. Students will get more possibilities to meet each other. They will also be able to turn to the university for help whenever they have questions about their mental health, their studies, or their further career.