For the first time in years, the study success of bachelor&#39;s students from universities is declining: only 71 percent of the 2013-2014 class obtained the diploma within four years. International students graduate faster in bachelor and master’s degrees than their Dutch fellow students. This is demonstrated in the annual report of the Education Inspectorate.

The Education Inspectorate is looking for the cause for the slight decrease in the study success of university bachelor students and suspects it to be the extra high number that started a study in September 2013. It was the second-to-last academic year in which students were able to complete a study with a basic grant. This only became apparent in June, when the minister postponed her legislative amendment until September 2015, but almost everyone had already made their study choice. 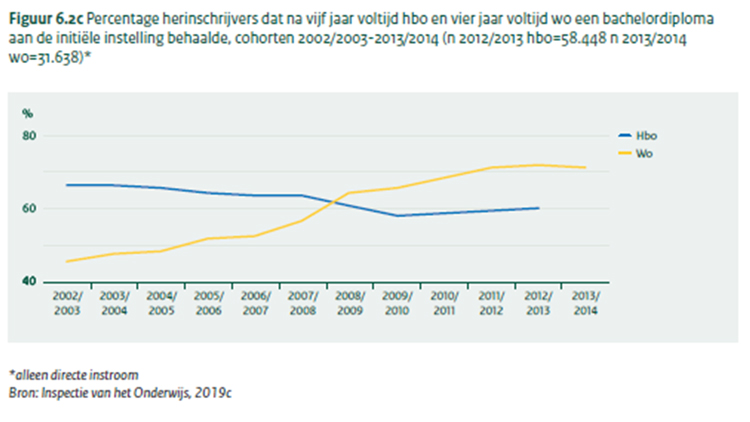 The Inspectorate is pleased to note an increase in the HBO (University of Applied Sciences) students who have obtained their bachelor's degree. Of the 2012-2013 class, 61 percent graduated within five years. The study success among both men and women increased, although women are still doing much better: the difference in diploma yield is 18 percentage points.

In its annual report The State of Education, the inspectorate wonders how the yield will develop in the coming years, and in particular from the 2015-2016 cohort, the first students in the loan system. 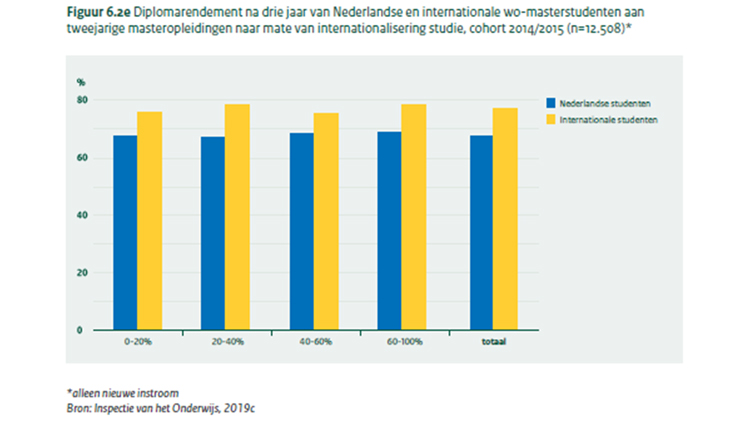 Pass rate after three years of Dutch and international academic master's students on two-year master's programmes according to the degree of internationalisation of their studies, cohort 2014/2015 (n=12,508)

In recent years, more and more internationals have opted to study at a Dutch college or university. And successfully, the Education Inspectorate writes. They obtain a diploma more often and faster than Dutch students, both in higher professional education and university education. For over five years, the difference in study success between internationals and Dutch has been more than 10 percentage points.

They are also more successful in university master studies. Almost 80 percent obtain their diploma with a one-year extension at the most, against almost 70 percent of the Dutch. Moreover, the number of Dutch university students who attain a master’s degree with a maximum of a one-year extension does not increase or decrease if there are more internationals in their lectures.

Job opportunities
The integration into the labor market has improved. A year and a half after graduation, 3.5 percent of HBO graduates are unemployed and 5.5 percent of university graduates. This percentage has fallen over the past three years and is low compared to other countries, the inspection said.

Based on the annual report of education inspector NVAO (Accreditation Organisation of the Netherlands and Flanders), the inspectorate finds that the quality of the existing higher education programs is satisfactory, as is the accreditation system. However, the reliability of the NVAO judgments can be improved: there must be basic rules for the expert panels who approve the courses. NVAO should also make more frequent analyses of the assessments. Institutions can advantage from this.