Imagine the Utrecht Science Park with more student homes and almost no cars. A new tram line would connect the campus to Zeist and a new intercity station near Lunetten. Like the idea? Well, that’s what the municipality wants to do, according to its project Utrecht Nabij (Utrecht nearby), for which it has applied for 2.1 billion euro from the National Growth Fund.

The plans (document in Dutch) include creating a public transport ring around the city to make it easy for people to travel between Leidsche Rijn, Lunetten, and the Utrecht Science Park. The idea is to reduce car traffic even further in the city by making the campus autoluw, which means that cars wouldn’t exactly be forbidden, but highly discouraged.

Those reaching De Uithof by car would be encouraged to park on the edge of the campus and then take a tram to their final destination. Currently, there is a parking lot meant for USP visitors along the A28 and plans to build a temporary parking space at Olympos are also on the table.

To make the Utrecht Science Park autoluw, the road network would be interrupted, which means people would not be able to drive from one side of the campus to the other. This would prevent the USP from being used as a route to go to the stadium, De Bilt, or the A28 motorway.

An Intercity station near Lunetten
Those who live, study or work in the USP would be expected to come by bike or public transport. According to the proposal, the ones choosing the latter wouldn’t need to travel through the busy Utrecht Central Station, getting off at the new intercity station Lunetten-Koningsweg instead. Railroad lines to the east (Aarnhem) and the South (Den Bosch) would meet there.

This isn’t the first time a new station in Lunetten is proposed. The idea has already been thoroughly discussed in municipal politics in 1998, according to former city council member Wolfgang Spier. The idea to extend the tram line in Zeist’s direction is new, however. The municipality would like the tram to reach a location near the A28 motorway so that drivers would be able to park their cars there and continue by tram to the USP. 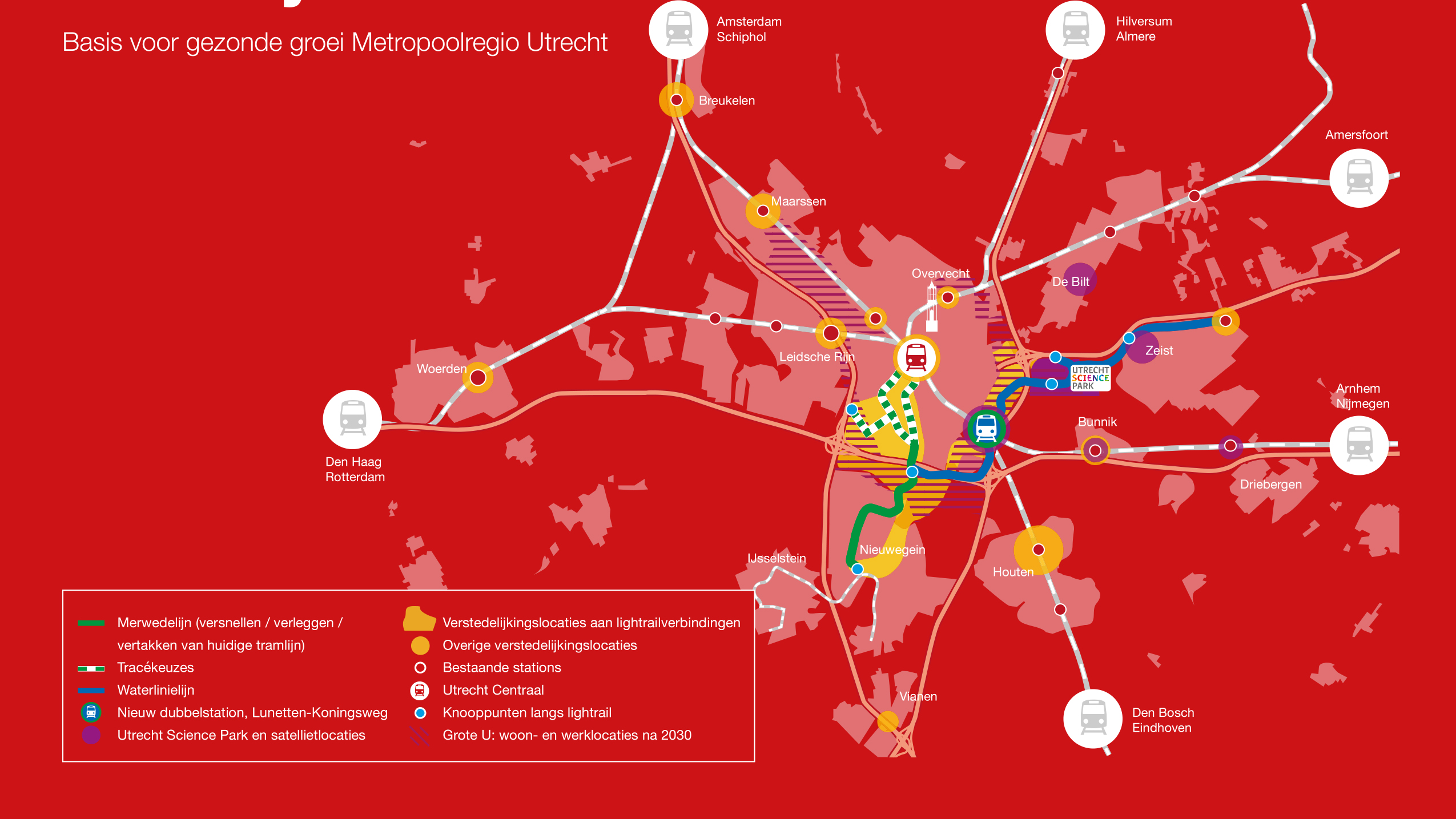 Image from the flyer 'Metropolitan Region.'

Additional housing
To solve the city’s housing shortage, the municipality wants to build 60,000 new homes, of which some would be located in the USP. The proposal doesn’t mention, however, what kind of houses they would be: would people with no link to the university also live on campus? So far, there have only been talks about expanding housing for students and PhD candidates. To do so, the city’s zoning plan would have to be changed. The municipality is currently working on an environmental vision for the area, which will be presented to the council in the spring.

Express tram to Amersfoort
Jan Henk van der Velden, director of the Utrecht Science Park Foundation, is happy with the proposal. "We, representing companies and institutions of Utrecht Science Park, Kromhout, and Utrecht Science Park Bilthoven, supported the application to the National Growth Fund last week. We can make a huge difference with this plan. There is a huge need for a stronger transportation system in the long run, considering the expected growth of students and staff. It is also good that Utrecht Central Station will be relieved because there is still a bottleneck there.”

The Utrecht Science Park Foundation also supports the idea of restricting the amount of cars in the USP. "As long as there are good parking facilities to park on the edge of the park, of course. UMCU has plans to build a parking space near the A28 and then also place the entrance to the hospital there. That would be a great way to prevent traffic nuisance.”

For Van der Velden, the new express tramway could be extended all the way to Amersfoort. He also hopes the connection to the Science Park in Bilthoven to be improved. As for the new houses, he doesn't think that a residential area will emerge in the USP. "We have always said that there should be more houses in the USP, but those should be related to the campus, like housing for students or PhD candidates. That will continue to be our approach to the environmental vision that the municipality is currently working on.”