Police vehicles in front of student complex Tuindorp West in the middle of the night. Photo: Maurice Visser

Police are showing up increasingly often to house parties at large student housing complexes, even when no one’s breaking the corona rules, according to Utrecht municipal party Student & Starter and a number of student organisations. Last week, they joined forces to sound the alarm, saying that an ‘unlawful enforcement’ is going on in students&#39; homes.

In a press release, Student & Starter voiced its outrage about overzealous police officers who put an end to parties for no reason, and then post messages about it on social media. The criticism received support from student union Vidius, residents association Boks, and umbrella organisation for associations FUG.

The complaint was inspired by an incident earlier this month, in which the police pulled the plug on a party with ‘half-naked students’ because they felt that the situation was ‘inappropriate’. The angry residents then stated that no one had broken any corona rules, and only housemates were present. They also explained that they weren’t fully dressed because they were singing the well-known student song ‘shirt off and wave’.

The incident was reported by Dutch newspaper AD. According to the residents, that was a ‘penny dreadful’ of a story.

Negative image
Myrthe van Mil, from Student & Starter, told DUB that this is just the tip of the iceberg. “We’re hearing more and more stories about the police knocking on the door even though nothing’s going on.”

She emphasised that students can do whatever they want inside their own homes, as long as they’re abiding by the government’s rules. In her view, the ‘disproportionate’ and ‘unlawful’ acts committed by the police contribute to the negative image students have in times of corona. “It’s about our image, too. Students are often treated as suspects when they’ve done nothing wrong.”

Zero tolerance
BoKS, the organisation that defends the interests of SSH residents, confirms that, since the introduction of stricter corona rules, there’s been an increase in reports from students who resent the 'obtrusive' enforcement at student housing complexes like the IBB and Tuindorp West.

To Chairman Daan Rovers, the reports are ‘worrying’. He’s heard that police officers have shone floodlights into students’ kitchens, and are often unable to explain why students are being fined. “This is happening despite the fact that most students are taking the lockdown very seriously. It certainly damages the trust they have in the police.”

IBB's residential board also voiced its dissatisfaction with the frequent police actions. “We don’t approve of this zero-tolerance policy,” reads a message on their Facebook page. The board says that public statements from the police often imply that these instances concern illegal parties, when it isn’t the case. 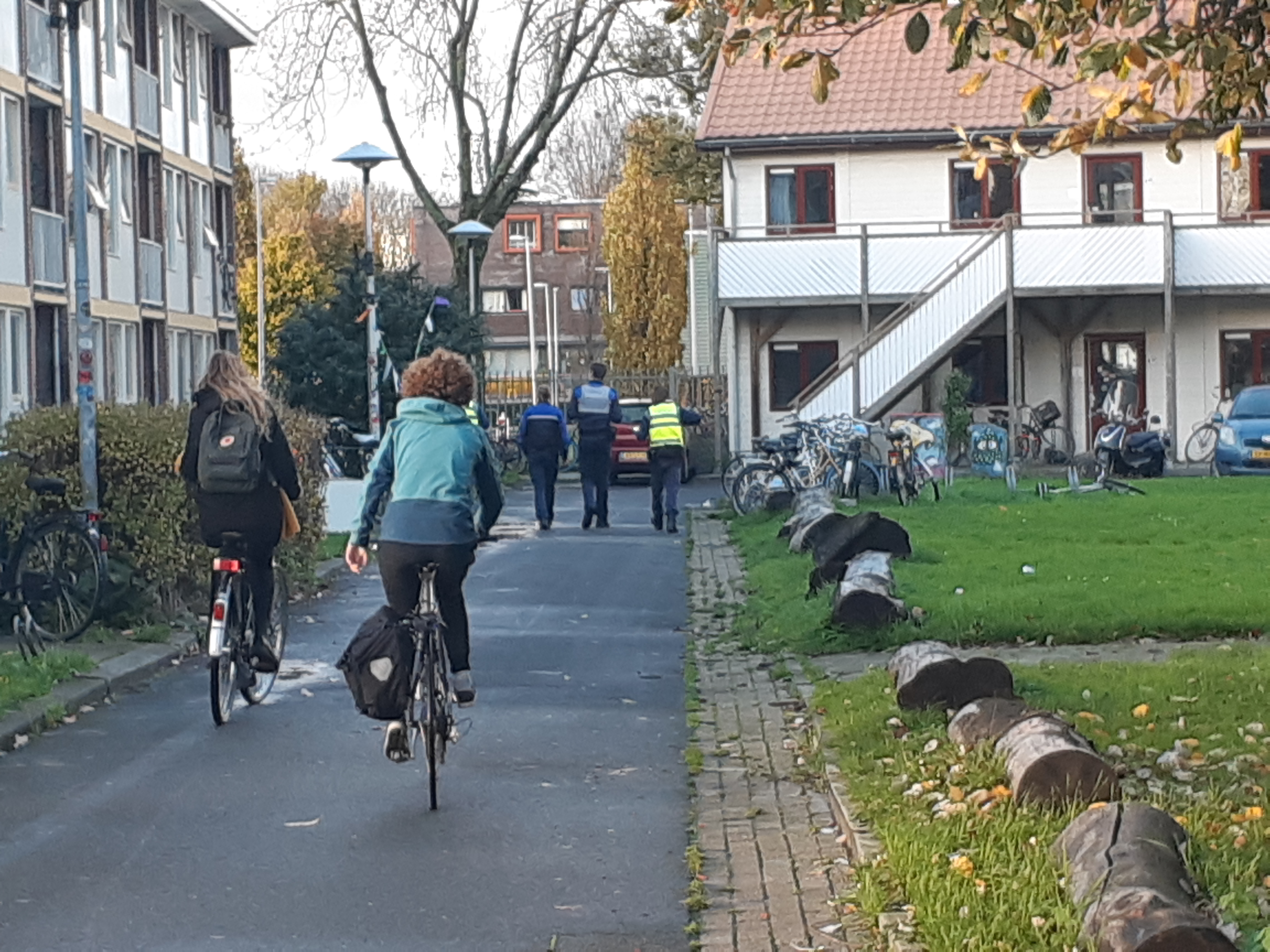 Surveillance at the IBB. Photo: DUB

Lugging beer
A week and a half ago, municipal council party Student & Starter, along with parties D66 and VVD, asked Utrecht mayor Peter Den Oudsten about his opinion on the issue. Although he empathised with students’ annoyance about the way the police wrote about the incident with the ‘half-naked’ students, he also emphasised that the police never come into people’s homes for no reason. In this particular case, there was a report of noise disturbance, he said.

Den Oudsten also acknowledged that students can do whatever they want in their own homes. However, formally speaking, student houses are not considered a single household. He also stated that, given the pandemic, throwing parties is not exactly a good idea. He complained about still seeing too many students lugging around crates of beer. “We’re urging people to postpone parties until they’re allowed again.”

In their press release, Student & Starter and the other student organisations say that people often forget the impact the corona crisis has on students. They are begging for distractions and relaxation. “As long as the corona rules are being followed, it’s actually great that people are able to let off some steam indoors.”

The Utrecht police also responded to Student & Starter’s press release. In an email to DUB, they stressed that they don’t take action without receiving reports on issues like noise disturbance. Additionally, they always start with a warning. “If the situation continues, then we have to take action. This procedure has not changed because of corona, neither do we distinguish between types of households. The police doesn’t judge what should or should not happen in one’s private home, but when the neighbourhood complains about nuisance, we have to come to a solution together.”

A fun time
Student & Starter added that rental organisation SSH also has been targeting student parties more than usual. Van Mil: “The maintenance crew has been warning students, but, thankfully, that’s  happening in a positive manner. They do it to prevent fines. But, all in all, that does influence the atmosphere in student housing complexes.”

A spokesperson for the SSH responded that they, too, feel that students should decide for themselves what they do with their housemates. The maintenance crew at the complexes mainly want to talk to the residents. “We want students to have fun, while urging them to not cause any disturbance. We’re not enforcers.”

All parties emphasise that they regularly discuss the situation in student housing, and that they will continue to do so in the coming months.

Last weekend, the police took action at eight addresses at the Ina Boudier-Bakkerlaan. All those cases were related to noise pollution, according to reports.