Science-Geo cluster gradually gets back its green

Around 2020, hanging out in the part of De Uithof where the Science and Geoscience faculties are housed will be a lot more comfortable. A green center will have arisen by then, with lots of trees and several seating elements, as well as a terrace at café Jazzmans. The walking, biking, and car paths will be almost entirely separated from each other.

No one will have missed the fact that for years, the northwest cluster of De Uithof (the part that’s surrounded by the Budapestlaan, Leuvenlaan and Sorbonnelaan) has experienced construction activities for years now. In the near future, it will house the home of many more employees and students of the faculties of Science and Geoscience. Although construction isn’t done yet, the outdoor areas are already being renovated at the moment. The area at the outer borders is up first. 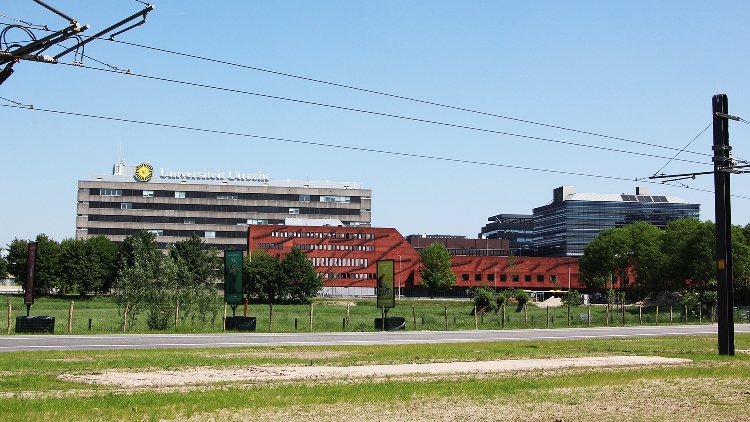 The Minnaert building has been back in use for classes since the second semester. The building has been thoroughly renovated, and is now – among other things – connected to the Buys Ballot building and the Koningsberger building, which was newly built in 2015. A ‘green walk’ connects the three buildings. Construction workers and gardeners are busy making paths and sidewalks, planting trees and sowing grass and flowers. Asphalt is being renovated. Just like elsewhere in De Uithof, this area will have the grass come up right to the edge of the buildings. The thirteen trees that were felled for the renovation, are (or will be) replaced, and 46 additional trees will be planted. 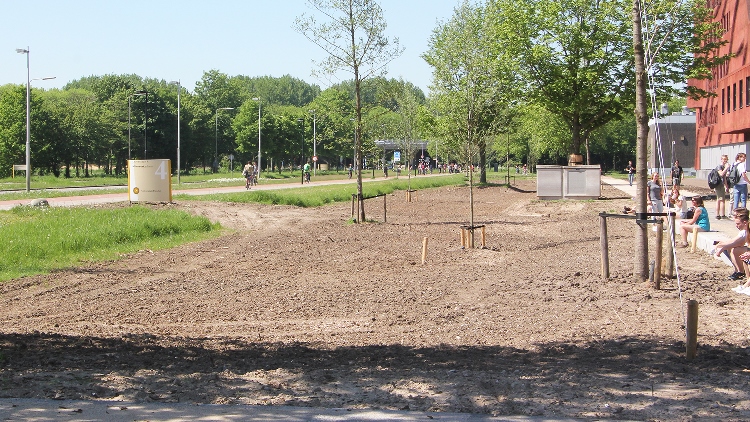 The path to the main entrance of the Minnaert building was moved to create a larger green zone. The path is bordered by extra high curbs, so you can sit and enjoy the views of the so-called wadi: a wide ditch built to collect rain water. The area will have plants and flowers that thrive in a wet environment. In front of café Jazzmans on the ground floor, there will be a terrace, with part of the chairs and tables meant to stay outside all year long. Until the official furniture arrives, a few picknick tables will have to suffice. 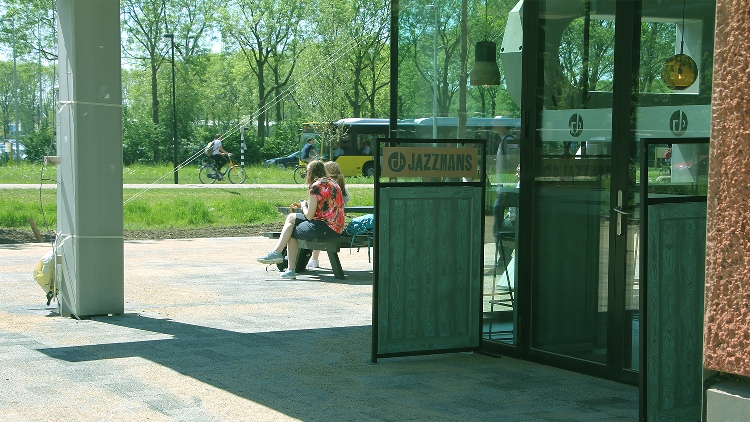 The area outside the Princetonlaan is also beginning to take shape. The construction work is almost done here. The Gemeenschappelijke Milieulaboratory (shared environmental laboratory) opened in 2013. This building, designed by RAU architects Amsterdam, houses the laboratories of research institutes TNO, Deltares and the Faculty of Geosciences. Here, people do research on the human influence on climate, air, water, and earth. The building is connected by a glass corridor to the TNO building and the new Geo tower. 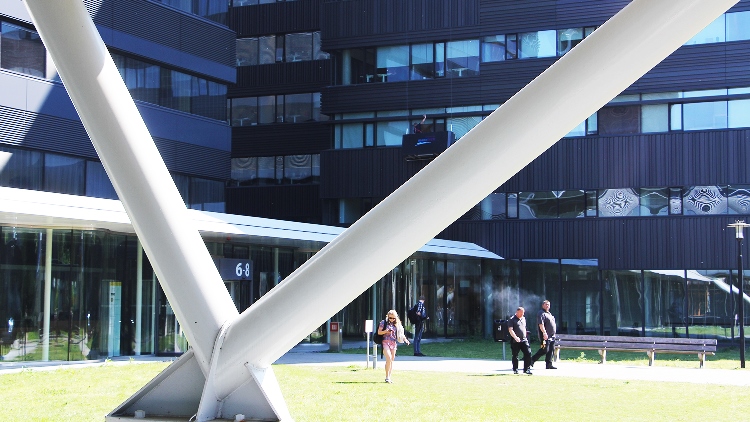 The Geo tower is the new home of administrative staff, scientists and master’s students of the faculty of Geosciences, who will gradually move there from the Van Unnik building, which will close in September. The building has an indoor bike shed, just like the Koningsberger building. The Geo people will have two floors to park their bikes on. Since March, the official name of the connected buildings at the Princetonlaan is ‘the Vening Meinesz building’. Felix Andries Vening Meinesz (1887 – 1966) was a well-known Utrecht-based scientist, who among other things invented a method to measure gravity very accurately. 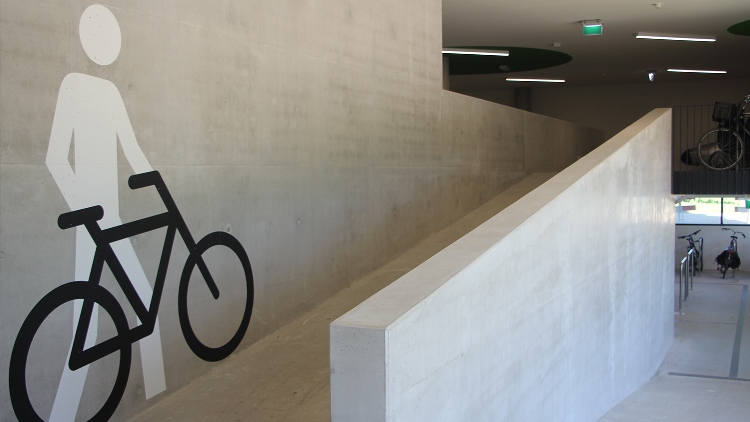 The path to the bike shed is finished, and so the remaining space around the Vening Meinesz building is ready to be decorated. Grass, trees and seats will be placed near the building. It’s just a matter of waiting for the construction of the Robert J van de Graaf laboratory to be finished. After construction, this lab at the Princetonlaan will be called the Earth Simulation Labotory, and belong to the earth scientists. 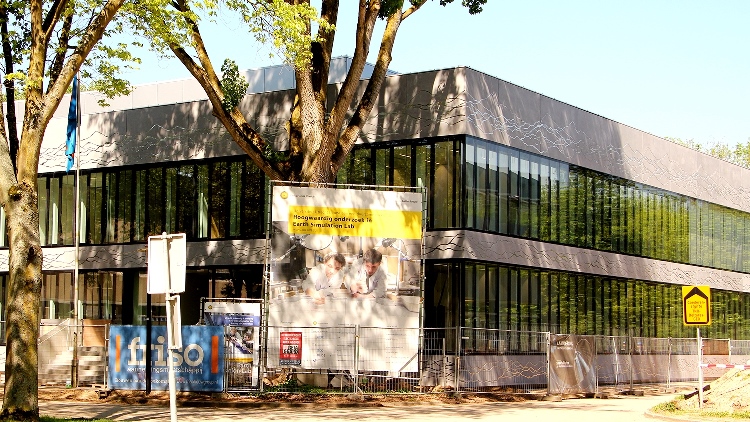 When the green around the borders has returned, it won’t signal an end of the construction work at the northwest cluster. The Geo and Science faculties will have to put up with a lot more demolition. De Vagant, for example, will disappear this summer. In 2019, what’s left of the Earth Science building will be demolished. Employees are gradually leaving the building, and the last ones will be gone at the end of the year. Then, the first step before demolition will be to remove the asbestos in the building. 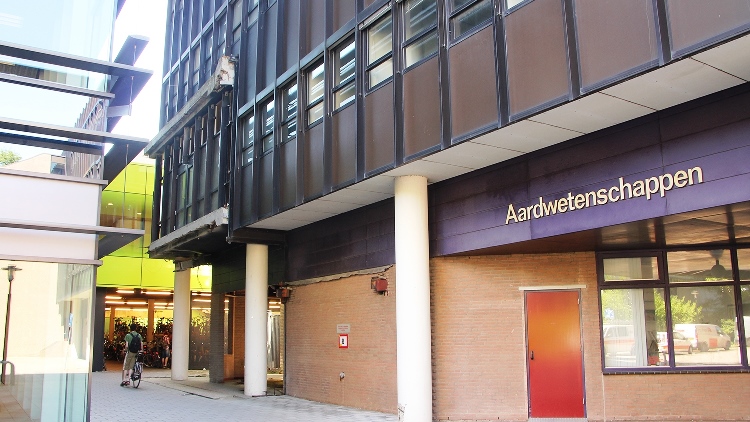 Employees and students in the area will have a view of a great wide flat area, including the parking in front of the Ornstein laboratory. The rest of the square will become more green, including grass, trees, and several types of seats such as benches and picknick tables. 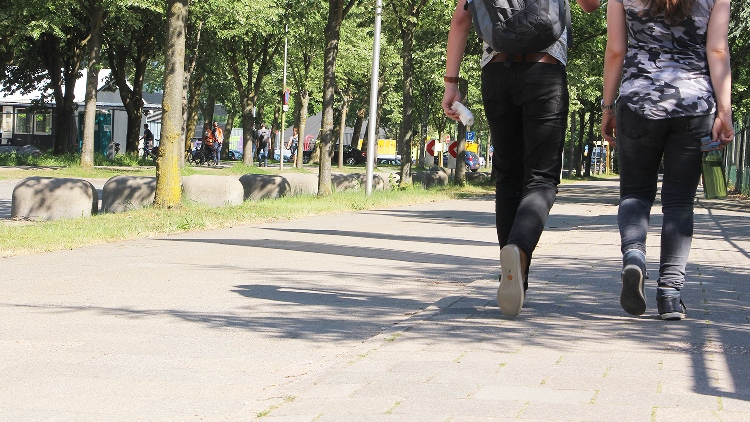 The traffic in this area will be reorganized. Pedestrians, cyclists and cars will have their ‘own roads’. The bike and walk paths will be closer to the Koningsberger building and Geo tower. This way, the bike path along the Budapestlaan at the side of the Botanical Gardens will be made obsolete. The old parking along the Leuvenlaan, which is filled with mountains of sand and gravel at the moment, will become a part of the Botanical Gardens, and will no longer be a parking area in the future. 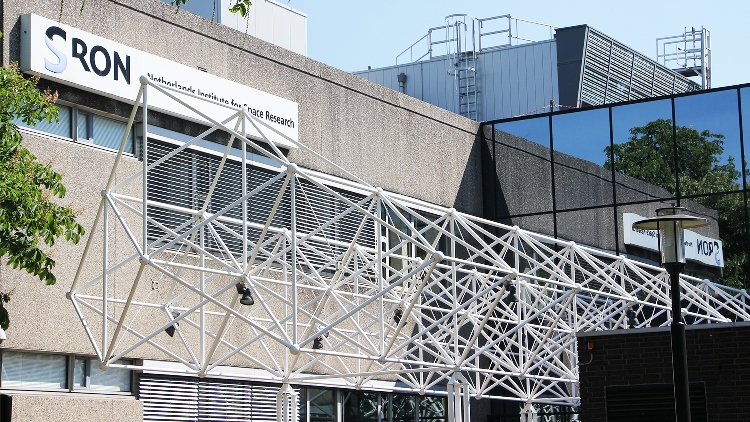 It remains uncertain what will happen with the building of SRON. The institute will move to Leiden in 2021.