Students hold open-air lectures to call for classes on campus: ‘Enough is enough’

Professor Joachim Duyndam, of the University of Humanistic Studies, during his open-air lecture. Photo: Noah Moeys

Dozens of students gathered on the Janskerkhof square last Wednesday, which was election day in the Netherlands. The initiative, organised by protest group #Ikwilnaarschool (‘I want to go to school’), included several open-air lectures. The group aimed to draw attention to students&#39; situation in the pandemic, arguing it is possible to teach classes on location in a safe way.

News
By Noah Moeys Translation Indra Spronk on 03/22/2021 - 10:34
Read in Dutch
“The situation is taking far too long for students. We’re being forgotten”, says UU student Ama Boahene (23). As a member of the six-person protest group #Ikwilnaarschool, she is one of the organisers of the ‘protest lecture’. Around twenty students gather on the Janskerkhof square, next to UU’s Law building. They are ‘in class’ and dutifully look at the chalkboard-on-wheels, where a girl is lecturing about sociologist Bruno Latour's theories.

Each one of the protesters was given a chance to teach. Boahene's turn had just finished. “Everyone who’s here today can give a lecture. I just talked about criminal law and Covid regulations. What happens if you spit in someone’s face, for instance”. She started her Master’s in Law in September. “But, of course, the main goal of my lecture was to show that gathering and being in class together is possible to do in a safe way”. 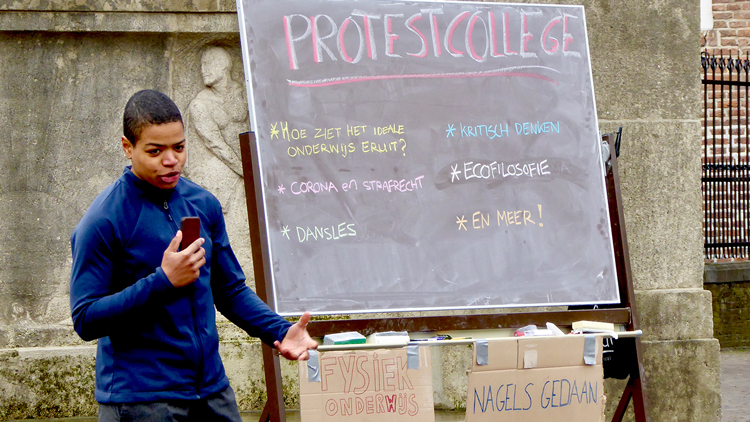 Joshua de Roos (24), another member of the organising party, joins her in explaining the goal of the protest. “We’re hoping that universities and universities of applied sciences reopen in April, and that all students in the Netherlands have classes on campus at least once a week. We’re also calling for more study spots”. A student at the University of Humanistic Studies, De Roos is sick of sitting idle at home. Through social media, he’s tried to call for as many students as possible to join him today, using the hashtag #Ikwilnaarschool. But why do this on election day? “Today, there are a lot more people on the streets than on other days, so we’re hoping to draw more attention to our cause”, he elucidates. “And who knows, perhaps it’ll make people decide to change their vote, so more voters will go for parties that fight for students”.

One of the students the hashtag has attracted is Rens (24). He saw the flyers and decided to attend the open-air lectures. He was fascinated by the one on critical thinking. “It’s so much fun: the audience is coming up with all these questions that I wouldn’t have thought of myself”. As a student of Philosophy and Dutch, Rens is having a hard time not being able to go to school. “There aren’t any discussions, and I’ve noticed that I’m running out of ideas because of it. Physical interaction is so important for creative thinking and writing”.

Joined by a professor
A little further away, four theatre students of the HKU University of the Arts, dressed in brightly-coloured jackets, take a cigarette break. Three of them aren’t sure what the protest is about. “For education on location, right?” one of them asks. A chorus of "oh, right, that’s on the poster over there" follows. HKU students are allowed to go to school. “But I do understand the protest, although I would’ve expected more students to be here”, one of the girls adds.

In the meantime, by the chalk board, the phone that stands in for a microphone by being connected to a sound box, is passed on to the only older man in the group. Professor Joachim Duyndam from the University of Humanistic Studies takes centre stage. “Meaning springs from judgment”, he starts, his words echoing across the square. “You can give meaning on your own or as a collecive. That then breeds an open-meaning society, which is the opposite of ‘the bubble’. You should always try to rise above a ‘bubble’”. The crowd – around thirty people by now – applauds.

When the professor returns to his spot in the audience, he says: “I agree with the protest, but there should have been way more students here. Education on campus is irreplaceable and it’s definitely possible to do it safely”. He sorely misses teaching in person. “I can tell from body language and attitude what students think of my classes. You connect with a group, you connect with people. It’s important for this experience to be brought back soon”.

This is not the first protest organised by #Ikwilnaarschool. In October, they protested in Amsterdam. The goal was the same: students were calling for in-person education to return, suggesting universities and universities of applied sciences to rent cinemas and theatres to use them as classrooms where students could sit 1.5 metre apart.