The initiative comes courtesy of University Council members Nicky Cornelissen and Nico Naus. Both noticed that there are people at the UU who aren’t comfortable identifying as either male or female, for instance when filling out questionnaires, or when choosing to enter either a men’s or a women’s bathroom. “It’s old fashioned to have to choose,” Naus says. Responding to their request, the Facilities Service Centre (FSC) will carry out the experiment.

‘Why not use the disabled bathroom?’
Ton van Helmondt, project leader at the FSC, hopes the trial can start before the summer vacation. The idea is to reassign one bathroom block (consisting of both a men’s and a women’s bathroom) in each of the three locations to a gender-neutral bathroom block. That means the gender-neutral bathroom will not become an addition to the existing bathrooms, like a disabled toilet. Van Helmondt says this is done on purpose. “The goal of the gender-neutral bathroom is to make as little distinction as possible based on gender. If you have a bathroom for men, for women, and one for people who identify as neither, then that distinction is in fact very explicit.”

Van Helmondt is regularly asked why this group doesn’t use the disabled toilet, as that is already gender-neutral. But the project leader says there’s a risk of negative associations there. “If you tell someone to use the disabled toilet if they don’t want to use the men’s or women’s bathroom, that person might think gender neutrality is seen as a disability.” Another reason to replace the men’s and women’s bathrooms is the fact that this way, it’s clear the gender-neutral bathroom isn’t just for transgenders.

‘Absurd’ to share a bathroom
Criticism is expected at the introduction of the gender-neutral bathrooms, just like in 2016, when the municipality of Utrecht decided to remove the gender distinction at several bathrooms at City Hall. Published articles received many negative comments. “Why should we sacrifice our privacy for a small group of people?” “How absurd. As a woman, I want a clean toilet. If men use it, everything becomes messy.” “Aside from hygiene-related issues, I feel less comfortable when I’m doing my make-up with a man present.” “Why should many feel uncomfortable because people unsure about their gender don’t have the guts to choose a men’s or a women’s bathroom?”

Cornelissen and Naus have heard similar criticism. “There are a lot of fears and myths,” Naus says. One person told Cornelissen, for example, that some men will think it’s offensive to see a woman putting on lipstick, and some women will feel like men stare at them for an uncomfortably long time. 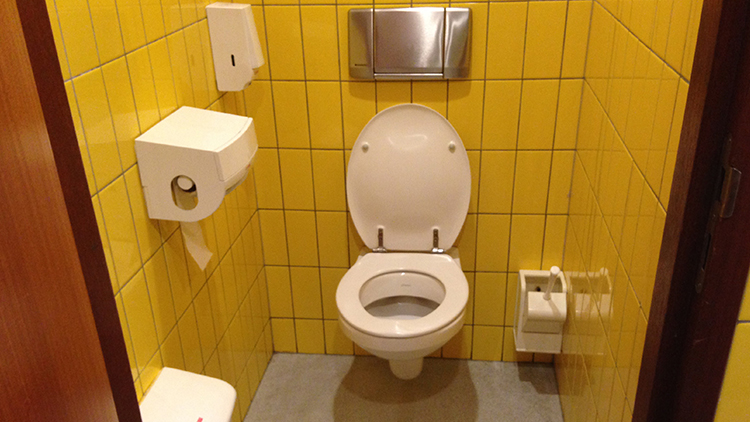 Van Helmondt says he doesn’t mean to dismiss all criticism. He understands that for some people at the UU, religious concerns may be relevant. For that reason, he also researched whether Muslim women are allowed to use a bathroom where men would also be present. “I asked a professor, but apparently there’s not one single right answer, because there are so many different currents within Islam.” Additionally, employees and students who feel uncomfortable using a gender-neutral bathrooms, will always be able to use a men’s or women’s bathroom elsewhere in the building, because during the six-month trial period will only affect one bathroom per building. Possible expansion of the trial will depend on the preliminary trial results.

Pilot only in De Uithof
Project leader Van Helmondt doesn’t want to say in which buildings the trial will take place. Cornelissen says it’ll be in three locations at De Uithof, and the university library is not one of them. The university council member says he regrets that, especially. “I’d love to hold the trial among a large and varied group of students and employees. You never know whether a Science student will think differently about gender-neutral bathrooms compared to a Humanities student, for instance. Holding the trial exclusively at De Uithof will possibly paint a one-sided picture. In the library, you’d be able to reach all students and employees.” Still, Van Helmondt says there’s a logical reason for why the library won’t be a trial location. “The library never participates in any research, because of the possible unrest, which is undesirable in a location where quiet is important.”

The three gender-neutral bathrooms can be recognized by a special icon with three stick figures: one in pants, one in a dress, and one dressed in half dress, half pants. The university chose this imagine instead of the text ‘WC’, to prevent people from being surprised at a gender-neutral bathroom. Van Helmondt: “You can use the ‘WC’ text if all bathrooms in a building are gender-neutral, but not right now.” Another change is that the urinals will be separated from each other with partitions.

Cleaning crew won’t have to count toilet paper rolls
The trial will run for six months. At three points during that time, a questionnaire will be held among the users. There will also be a study conducted among non-users, and the cleaning crew will note whether the bathrooms are cleaner or dirtier than they used to be. Van Helmondt: “There have been discussions about which bathroom group should be cleaned more often, and whether a gender-neutral bathroom will be dirtier. We’re asking the cleaning crew to check whether they need to clean more often or not, and whether they have the impression the bathroom is used less or more often. It’s about a feeling; we’re not asking them to count the toilet paper rolls.”

Van Helmondt expects to start the trial before the summer vacation. Before then, a contractor     will put up the partitions between the urinals.

For the magazine ‘UU for everyone’, DUB made a video about gender-neutral bathrooms. Practice your Dutch by watching the video below.