Uithof-ploggers pick up more than ten bags of litter

Over forty joggers ran a course of five kilometers through De Uithof on Wednesday, May 2, while picking up litter throughout the course. The so-called ploggers picked up more litter than organizer Giorgio Ponte, of the Green Office Utrecht, had expected.

It was a successful experiment, says Giorgio Ponte, master’s student Sustainable Development and employee of the Green Office Utrecht about the Plogging Run. Thanks to publicity of several regional media, the event drew not only students and employees of the university, but also other people from Utrecht. It was the first time the Plogging Run was organized in De Uithof. The event, which combines running and picking up litter, is originally a Swedish idea. The word plogging is a blend of the Swedish word ‘plocka’ (pick up) and jogging.

Ponte concerns himself with education, and looks for ways to encourage people to recycle and separate their trash. His search led him to plogging, which seemed like an excellent idea for De Uithof. “Even though De Uithof is generally pretty clean.”

The Green Office set out a five-kilometer course on campus, which was then run in several groups. Far more trash was collected than Ponte had expected: more than ten full trash bags. “Especially near the water, there was a lot of trash.” No strange things were found. “The trash consisted mostly of packaging of lunch meals.” Great, of course, that the trash has now been collected, but the bad news is that this means apparently the people in De Uithof are incapable of finding the trash cans, he says. 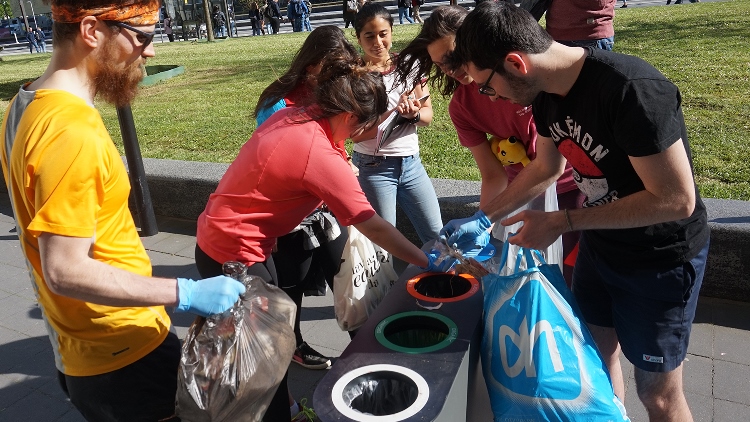 Returning to the Green Office, the ploggers had to separate the trash, too. Although the run wasn’t a competition, the fastest joggers finished the track in an hour; others took a little bit longer. Including the warming-up, separating the trash and the drink afterwards, the run took around two hours.