The elections for the University Council did not lead to any major surprises. Among the students, one seat went from UUinAction to De Vrije Student (The Free Student), but among staff members, UUinAction gained one more seat. The turnout among both students and staff was lower than in previous years.

Lijst Vuur (Fire List) retains its five seats and thus remains the largest student party in the council. This was announced last Friday by the chairman of the electoral committee, Fred Toppen, during a meeting at De Uithof, which could be followed online. Thanks to its large support base among the student associations, the Partij voor de Utrechtse Student (PvdUS; The Party for the Utrecht Student) managed to win three seats, just as it did last year.

The only party to lose a seat among students is UUinActie (UU in Action). Last year, this group jumped from one to three seats. Despite its great efforts in organising the Alarm Day for Science, the party has now lost a seat, which went to De Vrije Student, a party that can be described as more conservative. Now it has not one, but two representatives in the council. 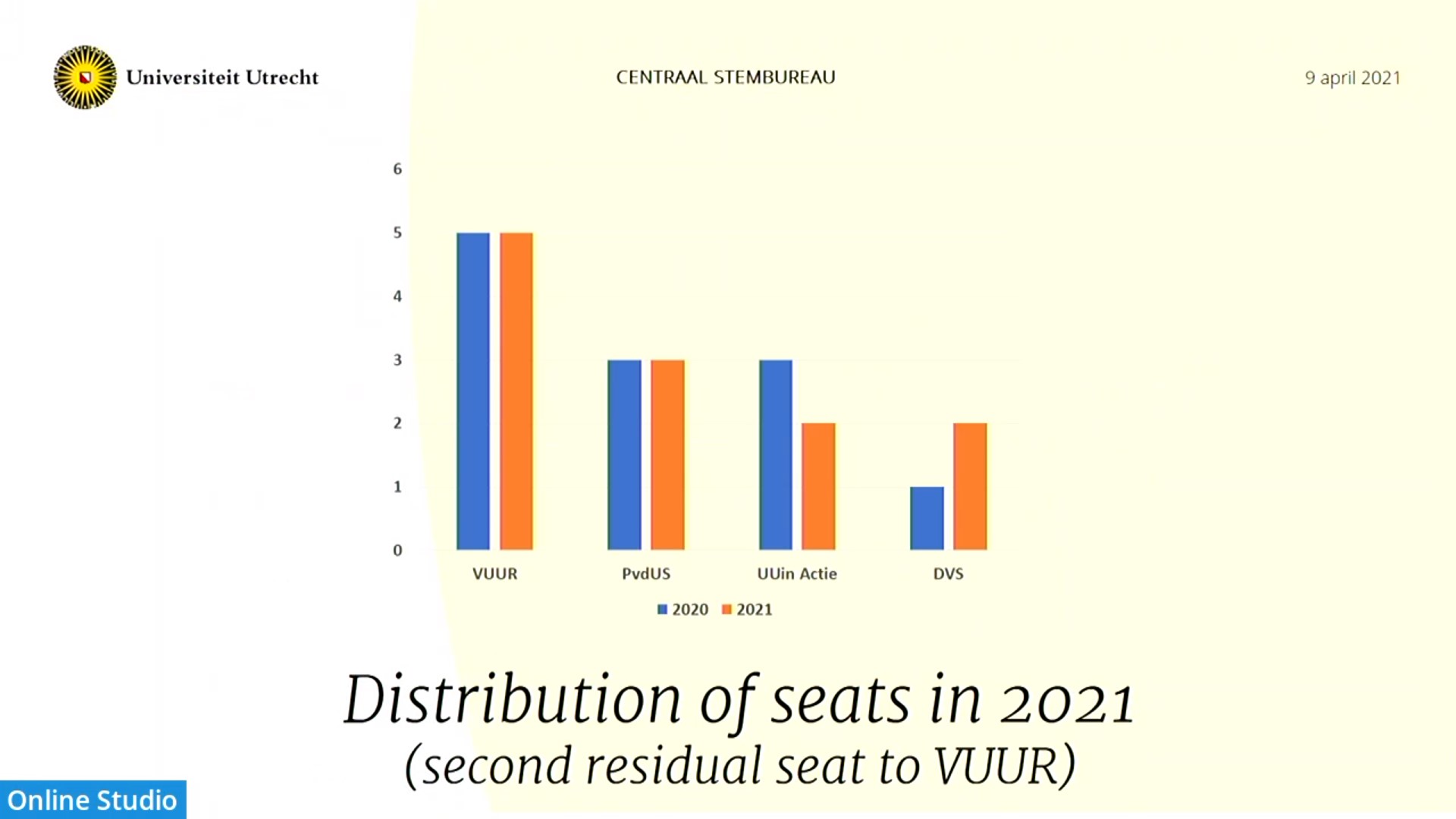 During a brief conversation with DUB's editor-in-chief Ries Agterberg, party leader Gijs Markwat raised a toast to the win and promised to do his best to temper some of the ambitions of Vuur and UUinActie.

This year's biggest vote puller, Vuur’s leading candidate and Media and Culture student Chiara Stam, did not get to speak due to technical problems. She was the only one who managed to reach the electoral threshold for preferential votes.

UUinActie does gain seats among staff
In the elections for the staff delegation, the traditional superpower Vlam (Flame) managed to hold on to a total of seven seats, one less than in the last elections two years ago. The staff group gained one seat and now has two. The Promovendipartij (PhD Party) retains two seats.

This was the final result of the elections, which were divided into four different districts. Zooming in, it can be seen that UUinActie owes its extra seat to the support of staff in the alpha and gamma faculties. In that district, the gain was at the expense of the seat that the PhD party UPP won last time.

UPP compensates for the loss in the district for employees of the faculties of Science and Veterinary Medicine. There, the party grew from one to two seats. Vlam still has one seat left in that district. Only veteran Gert Folkers ran as a candidate for that party.

As was the case two years ago, there were no elections for the seats allocated to support staff. Only three staff members applied for four seats. The remaining seat was allocated to the Vlam group in the alpha/ gamma district based on the results.

A final seat is reserved for the District of Medicine. There were no elections for this seat either, as there was only one candidate.

The biggest vote puller among the staff members was Father of the Council Joop Schippers. Apart from Schippers, UPP's Ellen Deelen also managed to reach the electoral threshold for preferential votes.

Dropping attendance
For the third year in a row, the turnout of UU students in the elections fell. It should be noted that, both last year and this year, there was less or no campaigning in the university buildings because of Covid.

Image: DUB, courtesy of Paul ter Veld and Anne Marie Partridge. Note: staff is only elected once every two years

Elections for staff representatives at the university level take place every other year. Turnout there has been on the decline since 2015. This year, 27.3 percent of all UU employees voted. Two years ago, the figure was 32.8 percent.

Elections in faculties as well
In addition to the University Council, elections took place at several faculties last week for the students and staff members who will take seats on the faculty councils. In other faculties and services, there were not enough candidates to organise elections.

The high turnout among employees of the Faculty of Law, Economics and Governance is striking. More than half of them participated in the elections.