Screenshot of the last University Council meeting of the year

The Executive Board has agreed with the University Council proposal to spend an additional 2.9 million euros on education next year. A heated discussion preceded the decision.

The total amount the university will budget for education is a sum of various sources of income. The money is distributed across the faculties by apportionment. One of the sources of income is the so-called quality funds or study advance means – the money that was made available by abolishing study financing. This money is meant for improving education. One element of the apportionment is the parameter of ‘ECTS rates’: for each ECTS students obtain, the faculty receives a certain amount of money. And it’s this parameter, in combination with the quality funds, that led to a heated discussion in the last University Council meeting of the academic year.

The council discussed the framework letter, the multi-annual budget, which was recently discussed by the financial committee of the University Council. Today, the university board asks the council members to agree to the distribution of funds as outlined by the Executive Board.

The University Council agenda mentioned a half hour of discussion about the framework letter, but it took around two hours, including four recesses, before the University Council approved the multi-annual budget. Twice, the meeting was suspended because the council members wished to consult with each other, and twice for the university board.

Amount per ECTS reduced
The University Council members, especially the student members, focused on the ECTS rate, because the university board has reduced the amount for 2021. This year, each ECTS is worth 32.84 euros; next year, that will be 31.71 euros. The students think the reduction is regrettable. For one thing, says Casper de Haes, because the number of students is increasing, and therefore the income from tuition fees is increasing along with it. Those funds are meant for education. Nienke Prins fears the quality funds will be used inappropriately, claiming that they’re not exclusively used for improving education. Jesse Wijlhuizen suspects the quality funds cover the cutbacks on the ECTS rate. He voices a demand on behalf of the students: the ECTS rate should be increased to 33 euros.

The Executive Board expresses hurt at the students’ assumptions that the funds are used inappropriately. The board ensures the council that the quality funds are in fact being used exclusively for improving education and reducing teachers’ workloads. The reduction of the ECTS rate is justifiable, the board says, because the foothold for education has increased. Moreover, the board has already reserved 14.8 million euros more for education in 2021 than it had for 2020. “If you take out the quality funds, can’t you see that we’re still investing more in education? Isn’t that the most important conclusion?” says rector Henk Kummeling. President Anton Pijpers responds angrily: “I think the council’s comments are insulting. For two years now, we’ve been investing extra into education, on top of the quality funds. Only looking at the ECTS rate is truly insulting.” 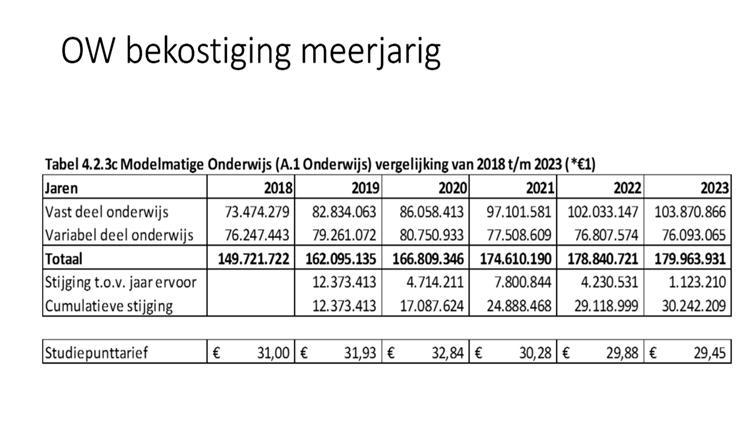 Uco requests 3.3 million
The University Council members say they didn’t wish to be insulting, but they’re simply “responding sharply” to the reduction of the ECTS rate and the expenditure of the quality funds. Their request for an increase is not only based on the financial data. They’re also fearing that the quality funds will end up being used to pay for the additional costs caused by the corona crisis for education. But they’re also responding to utterings from employees. Despite previous investments, the workloads are still incredibly high, and have even gone up because of the online education teachers suddenly had to provide, they say. “Investing more in this would be a good idea,” says Jesse, who calculates that increasing the rate to 33 euros amounts to an additional 3.3 million for education in 2021.

The board is surprised about the University Council announcement that the faculties are unsatisfied with the reduction of the ECTS rate. They’d recently met with deans and directors, and had not heard any complaints about a lack of funding. The board also emphasises that the money that’s needed to solve the corona costs would not be paid from quality funds, but will come from elsewhere. “In dialogue with co-determination,” the rector says.

Suspensions with results
The first suspension follows, but this doesn’t change the University Council members’ demands. They want 33 euros per ECTS or they will not agree to the framework letter. Vice president Annetje Ottow then requests a suspension to discuss with the rector and the president. They return with a surprising offer: the board wants to budget an additional 2.4 million euros for education, but won’t increase the ECTS rate. “We’ve listened to you and want to budget additional funds, but don’t wish to change the ECTS rate. That’s only one parameter.” The 2.4 million euros equates to the funding the university would contribute to research institute Nioz, which the board is willing to pay from another budget instead (see box).

Another suspension follows, after which the University Council ‘reaches out’ and asks for 2.9 million euros. That’s 400,000 euros less than it originally requested. After yet another suspension by the Executive Board, the board members return with good news: the board will budget an additional 2.9 million euros for education, which will be distributed across the faculties, because they can understand that the council wishes to spend more money on education. “But we never want to have another discussion about the ECTS rate again,” Ottow says. A discussion about the amount of money that’s spent on education is welcome, but only in a broader context, and not focused on a single parameter, she says. The majority of the University Council makes the promise, although it doesn’t exclude the possibility of another discussion about the topic when the university’s allocation model (UVM) is evaluated this autumn. The UVM is the model the UU uses to distribute the money across faculties and departments. It’s expected that the ECTS rate will be removed from the model after the evaluation.

The ‘Nioz budget’
In the framework letter, the university budgets 2.4 million euros in 2021 for the collaboration with the Nioz. This money comes from the ‘policy space’, money the Executive Board is allowed to spend without University Council approval. In 2021, this amount comes from the general reserves – the UU’s savings. The council members don’t understand this shift. The explanation is that this had been agreed upon with the University Council. Initially, Annetje Ottow had wanted to initiate an exchange of sorts: the Nioz would once more be paid from the reserves, so the 2.4 million euros from the policy space can be spent on education instead. The increase of the funding for education to 2.9 million euros means the board members will still have to come up with a way to pay for this.