UUers' workload increased because of Covid; UU still a pleasant place to work

Employees at Utrecht University are experiencing heavy workloads and high levels of stress, especially those who work at the Faculty of Humanities and the University College. Many staff members, in particular those working at the Faculty of Veterinary Medicine, state that gossip makes the work environment feel less safe. These are some of the results of the 2021 Employee Survey.

Every few years, Utrecht University conducts a study into its own organisation, to see how employees perceive the university as an employer, identify the main issues relevant to the staff, and define to what extent these issues influence how safe the work environment feels for employees. This time, the study covered eleven themes, including the effects of the Covid-19 pandemic. Conducted between March 29 and April 21, the survey was responded by 50.3 percent of UU's 8,083 employees. According to research agency IVA Onderwijs, the results are representative of the entire staff community.

One of the most remarkable results is that support staff tend to speak more favourably about their work experience than the scientific staff, as they experience less stress at their jobs and their workload is less heavy. In addition, managers and professors tend to be more satisfied than teachers and lecturers. It also makes a difference how long someone’s been working at the UU, the study shows. Those who have been working at UU for a longer period of time report a less positive experience.

Workload and work-related stress
Even so, as previous studies have also shown, Utrecht University is doing well in comparison to other universities. On a scale from 1 to 10, employees give UU an average grade of 7.8. The most satisfied employees can be found at the libraries and the faculty of Social Sciences, which received an 8.1 and an 8, respectively. The least satisfied are those working at Humanities and University College Utrecht (CUU), but even those have obtained a satisfactory grade, at 7.5 and 7.4 respectively. Scientific staff tend to be more critical than support staff: they gave UU a 7.2 as an employer, while support staff gave the university a 7.9.

Many UU employees experience heavy workloads and a lot of occupational stress. In that regard, UU’s score on this aspect is lower than those from other universities. Especially the scientific staff feels like they don’t have enough time to do their jobs, in particular at UCU. As a result, they worry about their work in their spare time more than the support staff do. Those who work in the libraries experience the least amount of workload stress. 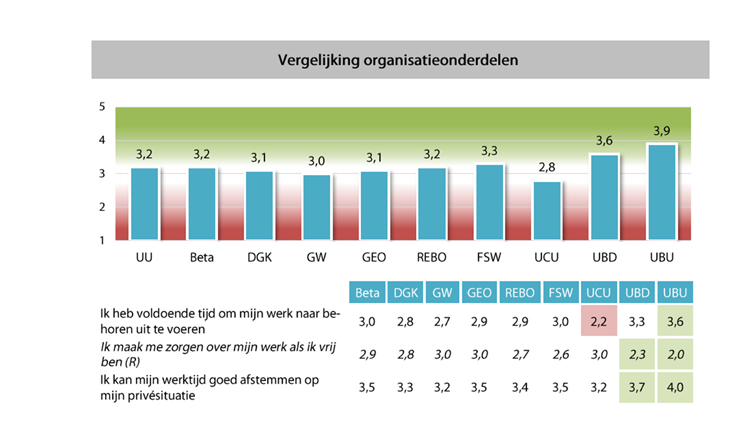 In terms of occupational stress, there’s a big difference between the scientific staff and the support staff. Asked to state how much they agree with the statement 'I'm exhausted at the end of a workday' on a scale from 0 to 5, the scientific staff replied with a 3.4 on average. The stress is, once again, highest at UCU, closely followed by Humanities. The senior lecturers experience more work-related stress than the professors.

Feeling safe
Feeling safe is a hot topic at the university, for both employees and students. Of all the respondents, 13 percent say they have been the victim of inappropriate behaviour at work. If we scale that percentage up to the entire university, that means over 1,000 employees have faced this issue, of which 58 percent took further steps against it. The least satisfied are those who have asked for help from HR advisors. These employees are the most satisfied with the university’s social workers. 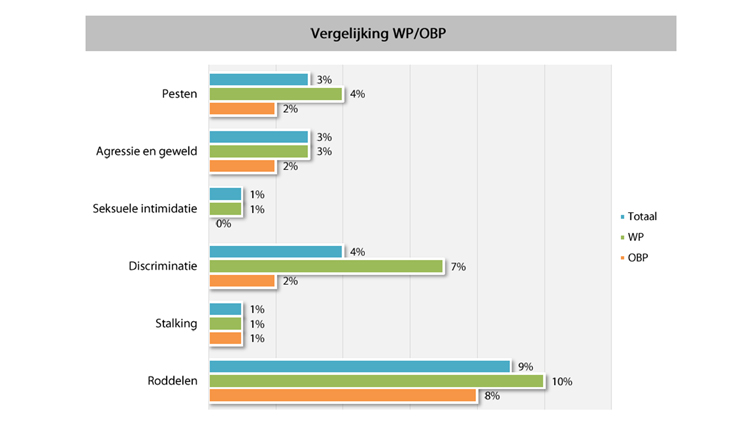 When it comes to feelng safe at work, respondents were asked about gossiping, bullying, discrimination, stalking, sexual harassment, and aggressive behaviour and violence. It looks like gossiping is commonplace at the university. The employees of the Faculty of Veterinary Medicine are affected the most by it, at 16 percent, while other faculties score around 9 percent.

Discrimination comes in second place at 4 percent, which also affects the scientific staff more than others. Bullying comes third. Both of them happen the most at UCU and Humanities.

Covid-19
The coronavirus pandemic and its corresponding regulations have affected UUers greatly. although the situation has made them more positive about working at UU, Covid has had negative effects with regards to workloads, mental health, and enthusiasm.

It’s also had less beneficial consequences on the environment. Employees say that, since the pandemic started, they have been traveling to the university by car more often than by public transport. However, the number of people commuting to the campus will probably drop in the near future, as 30 percent of respondents indicate that they would like to work from home half of the time, even after Covid. Veterinary medicine staff are the ones least inclined to keep working from home, but then again, very little of their work can be done remotely.

The Executive Board is satisfied with the results. “A 7.8, that’s higher than I expected,” says recently reappointed UU president Anton Pijpers. “Still, there are things we need to keep a watchful eye on. The workload and the balance between work and private life remain themes we should pay extra attention to. Topics like a safe work environment are also on our radar. We’ve already been working on improving our procedures, and the monitor indicates that that’s indeed necessary.”

According to Pijpers, the deans will be asked to look at the specific issues going on at their faculties. “There are differences between the faculties. They have to create action plans to work on these issues.”