The UU project plan ‘Inflow and selection’ caused quite a lot of mayhem in early February. Twitter filled with criticism, and questions were asked in parliament. How do UU vice-chairwoman Annetje Ottow and taskforce chairwoman Janneke Plantenga respond to the comments on the project plan?

The goal of the ‘Project Plan Diversity: inflow and selection’, which was created on behalf of the Taskforce Diversity, is the realisation of a culture in which all ‘qualitatively eligible study choosers, regardless of background’ feel welcome at the UU. The document is a step-by-step plan for faculties to use in the next two years in researching their student population and then establish their diversity goals. The way they do this isn’t set in stone, the project plan says. “It makes sense, for instance, that several study programmes, given their current population, would want to draw more students with a non-western background, while there may also be programmes that aim specifically at creating a better gender balance.”

The UU project plan faced a lot of criticism after an article was published in newspaper De Telegraaf. The newspaper said the authors of the plan feel ‘diversity is sorely needed at the very white Utrecht University.’ For that reason, the university was said to consider ‘diversity actions’, such as installing separate prayer rooms for men and women. The UU wants to ‘Islamify’, concluded PVV politician Machiel de Graaf, among others. Similar sounds were heard on Twitter: “Why does diversity always equal more Islam?”

The criticism focused mainly on one of the appendixes of the document, which contained a collection of quotes from UUers, making suggestions about how to make the UU more diverse. The prayer room with separate entrances was mentioned, as was the idea to draw more attention to facilities for students with disabilities.

Although the university emphasised these quotes did not equal policy plans, and stated that De Telegraaf missed the point of the project plan by focusing on the appendix, the university couldn’t quite get away from the image that had grown. As University Council member Sebastian Wijnands said: “Because someone decided it was relevant to attach these ideas to the plan in the appendix, I can’t help but feel something is meant by this. That perhaps it’s a speck on the horizon.”

How does the UU view the criticism it received from both within and outside the university? DUB asked the chairwoman of the Taskforce Diversity Janneke Plantenga and vice-chairwoman of the executive board Annetje Ottow to discuss the matter.

Why does the university think it’s important to work on a diverse student population? 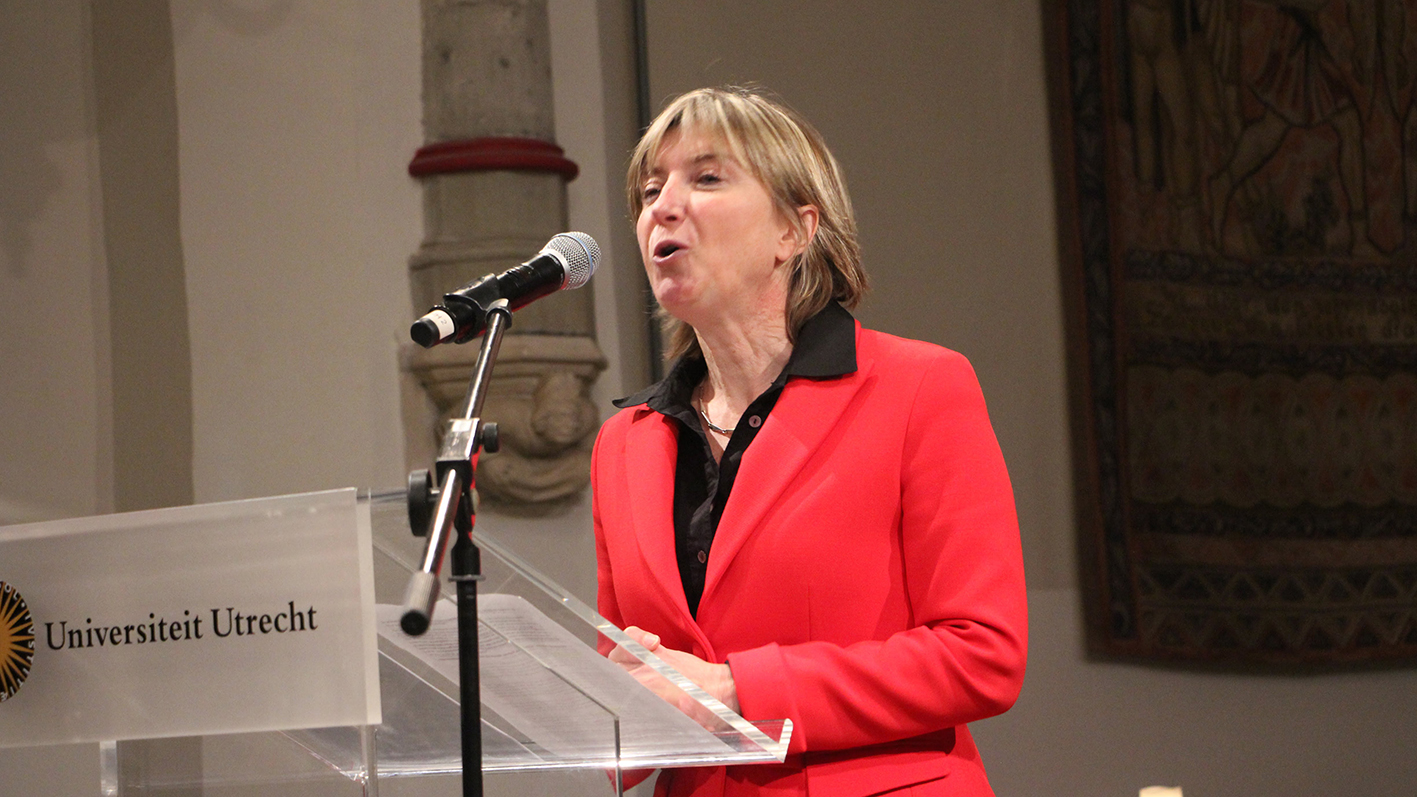 Ottow: “Everyone who possesses the right talents has a right to education. As university, we have the public duty to provide that education. We feel it’s incredibly important to be inclusive, that everyone gets a fair, equal chance. If we were to shape our selection system in such a way that it creates inequality, we’re not handling that right to education well. It’s not for nothing that Utrecht University’s motto is ‘we for a better world’. We base everything we do on that, including diversity.”

Plantenga: “Let’s keep it practical. Wouldn’t it be a shame if three potentially highly-gifted mathematicians are excluded because of your way of selecting students.”

Ottow: “Diversity also adds value to your education. A diverse community of students contributes to an inspiring, challenging education environment. If as a student you go to university and you learn to work together with students from all kinds of different backgrounds, it’ll help you in society, which is also filled with all kinds of people. What you learn from studying in a diverse environment, that’s something you’ll always take with you. It’s a good preparation for working in a pluriform society.”

I assume the Taskforce Diversity was based on a certain need, or because of a certain issue. What was that issue?
Plantenga: “I wouldn’t say ‘an issue’, as that makes it rather heavy. I view diversity policy as an attempt to do something positive. As a tool to create an open, inclusive society. To me, it’s more about a question that’s on the table.”

What is that question?
Plantenga: “You can see that there are groups that aren’t very well-represented at the UU. As Taskforce, we wonder why that is. Do these groups choose not to go to university? Have they not gotten the same opportunities? Or do certain selection processes put them at a disadvantage?”

You say some groups aren’t well-represented at the UU. One of the points geographer Josse de Voogd made in his criticism was that migrants at Utrecht University aren’t underrepresented, as the first edition of the report’s appendix suggested, but that the percentage of migrants at the UU is almost as high as it is among vwo high school students.
Ottow: “When we’re talking about underrepresented groups, that doesn’t mean we’re only talking about students from a migrant background, but also people of a certain age, LGBT+ students, and students with disabilities. And male-to-female ratios. In short, we’re talking about offering equal opportunities to everyone who’s qualified for academic education.”

Plantenga: “The multicultural aspect is only one part of the diversity palette.”

Which groups are underrepresented?
Ottow: “If you read the project plan carefully, you’ll see this is still a question that needs to be answered.”

Still, the project plan mentions that the university ‘aims to be more of a mirror of the pupil- and student populations that qualify for academic studies’, and that ‘at the UU, there are several groups of which the application and registration numbers fall behind’.
Ottow: “Which groups are underrepresented is something that can vary between programmes.”

Plantenga: “The goal of the project plan is to create awareness. That programmes start to wonder: Is our student population a cross-section of society? Is that right? Data can be a first indication for this, but no more than that.”

Ottow: “It would be a shame if we only looked at the numbers of applications and registrations. Underrepresentation can also mean that we, as a university, don’t focus on a certain group enough. As taskforce, for instance, we’ve seen that we’re not paying enough attention to the obstacles faced at our university by students with disabilities. That means we need to start talking about this, and we need to study whether there’s anything we can do for this group.”

Plantenga: “The interesting thing about the ‘Project Plan Diversity: inflow and selection’ is exactly this: that we don’t have all the answers yet, and we’re talking to each other about what we see.”

In that respect, could you say it’s been an interesting development, that there was such discussion about the contents of the project plan and the UU’s diversity goals?
Plantenga: “A university thrives thanks to free speech and the exchange of ideas. So it’s good to test your ideas, but the discussion does have to be had in a respectful manner. It’s really strange when you’re suddenly put in a certain frame. That ideas coming from UUers in an appendix of a note are presented as full-fledged policy proposals. That’s not what it is at all!”

Why was that appendix attached to the plan?
Ottow: “It’s nothing more than a report of a debate.”

Plantenga: “An inventory of all ideas that came up. Of course, these ideas could’ve been presented differently, but that’s hindsight.”

One of the points of criticism was that the students the taskforce spoke with for this appendix all came from Muslim backgrounds. Why was that choice made?
Plantenga: “It was a first round of chats, an orientation. And if you have a limited amount of time to have these first talks, I think it’s legitimate to ask four Muslim students. Because we didn’t have as much knowledge of this group as we do of, for instance, people with disabilities, as we’ve already done some research in their situations. But do they then make the policy decisions? No.”

Ottow: “The project is only really starting now. So you can’t attach this serious importance to it as is apparently being done now.”

Perhaps it’s a concern; if the first round of talks wasn’t done with a diverse group of students, how can we trust this will be different in future discussions?
Ottow: “I understand, but on the other hand, we’ve been clear that this is just a starting point. So everyone will have all sorts of options to speak their minds. That appendix is blown so far out of proportion. I think enough has been said about it.”

“It’s the faculties’ turn now. They will speak with the study programmes to see how they can ensure study choosers, regardless of background, feel welcome during the process of registration, matching, and selection. We feel it’s very important to have the programmes themselves – meaning teachers, students, managers – make the decisions and execute them. You can have different ideas about the question of what diversity is, how we deal with it, and how you can bear responsibility for it. But I hope that, in the debates we’re having, we treat each other with care.”