After a somewhat uncomfortable start in the era of the &#39;digital&#39; university, the University Council now feels that it is once again a fully-fledged discussion partner of the Executive Board. The regular participation cycle has been quickly restored. "There are currently difficult issues at stake, such as privacy, quality of education and research delays. We adopt a constructive attitude, but sometimes we also have to ask painful questions."

At the beginning of April, umbrella organisations for employee and student representation in higher education noted that some employee and student representation councils feel that they have been excluded by the boards. The speed with which boards have to make decisions about online education or examinations did not allow for consultation with the employee and student representation council beforehand, the Higher Education Press Office (HOP) wrote. In Utrecht, however, these concerns are not shared. "The members of the Utrecht Executive Board always check beforehand which decisions they can take themselves in this situation and which decisions must first be submitted to the council", say the chairman of the student section in the University Council Jesse Wijlhuizen and the chairman of the staff section Wim de Smidt. "Incidentally, the statutory powers of the council are quite broad."

The two University Council members think back to the time when the university decided to go digital. On the 12th of March, all employees and students were told that classes on Friday the 13th would not take place and that from Monday March 16, everyone had to work from home and that classes would continue online. A week later, the University Council sat down with the Executive Board in what is called a 'special meeting'. "During this meeting we could discuss the crisis situation, the decisions already taken by the Executive Board, the role of the council, and the communication with the council", say Wijlhuizen and De Smidt. It was agreed upon how questions, remarks, suggestions, and recommendations could be passed on as quickly as possible to the Executive Board or certain employees close to the Board.

There are no students on the crisis team

The students in the University Council quickly realised that they had to make sure that the interests of the student were properly brought to the attention. Wijlhuizen: "There are no students in the crisis team that is now making the decisions. As a result, the team is sometimes less aware of the consequences of certain decisions for students. For example, we asked whether the resits of block 3 could be made more flexible, because halfway through the block the classes continued online. There are also bachelor's programmes that have a mandatory foreign element in block 4. The students of these programmes wonder whether they can graduate if their trip abroad is cancelled. We hope to clarify this soon before re-enrolment closes. And we have asked to look at the liveability of De Uithof because all facilities such as De Spar have closed their doors." 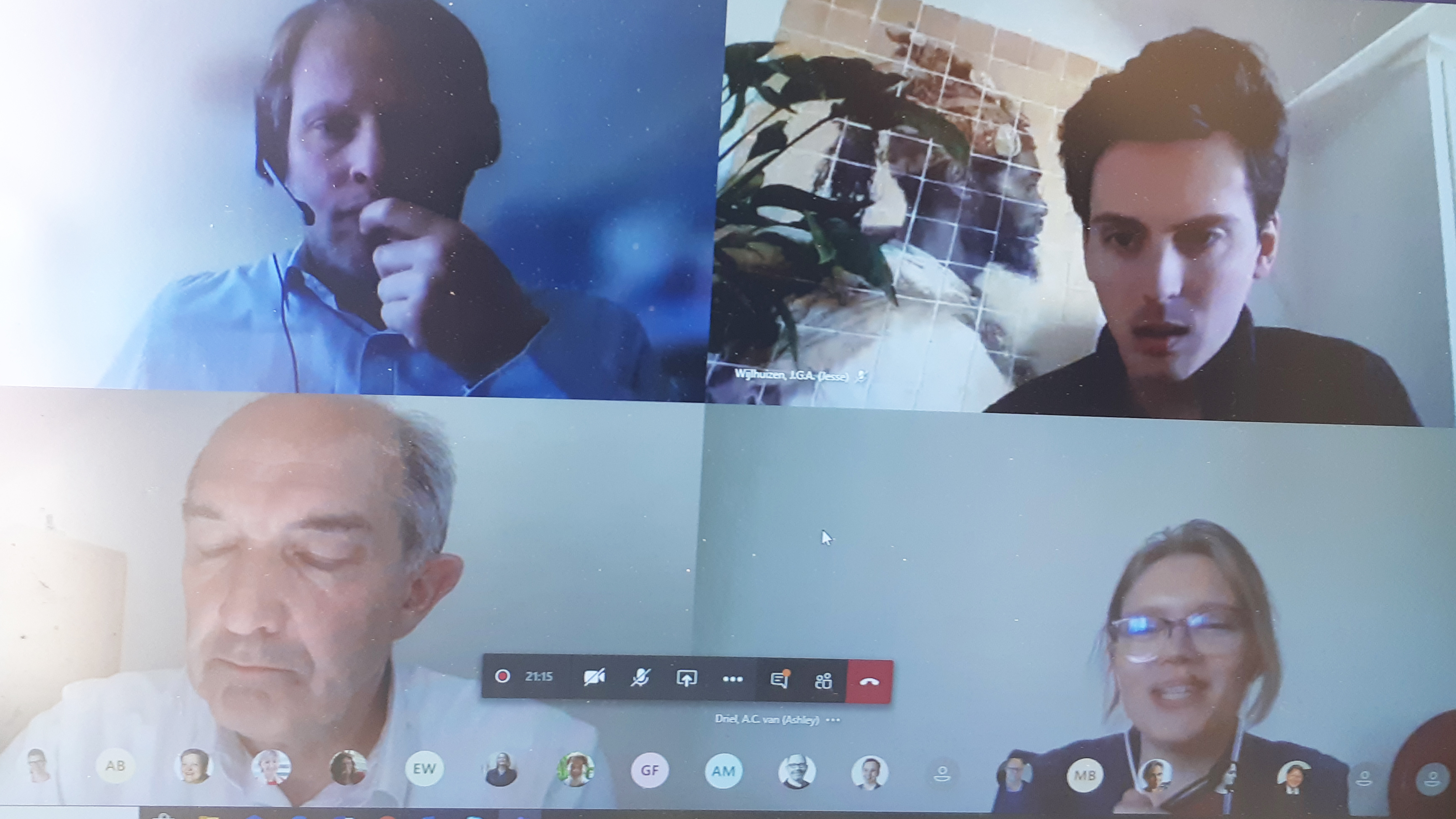 De Smidt: "When it comes to staff, we asked for attention to the PhD candidates who are in the final phase of their research first. They cannot, for example, work in the library or the lab and are therefore delayed. It is not that difficult to extend their contract. But because PhD candidates are often funded by different agencies, the question arises as to who will pay their salary. The same goes for temporary researchers." According to the two chairmen, the suggestions and recommendations of the Council are genuinely taken into account. "Action will be taken upon them. At the moment, for example, it is being investigated how many PhD candidates and temporary researchers this concerns", says De Smidt.

At the beginning of April, the University Council sent a bouquet to the board members and secretary general Leon van de Zande. "The flowers were actually for the entire crisis team and the administration to thank them for their hard work in making online education and working from home possible. From IT to communication. Everyone worked very hard, but because we couldn't send flowers to everyone, they went to the Executive Board and the secretary general ", says De Smidt. "After that first special meeting, the planned meetings and informal consultations with the Executive Board were also resumed. By default, we are updated on the current situation and the questions that are being asked at that time and are being investigated."

The meetings of the University Council and those of all faculty councils and the Employees' Consultative Body of the Administration Building are now held online and can be attended by interested parties. The employee and student representatives are in contact with each other so that local questions can also be passed on to the Executive Board via the University Council. "We also receive questions and comments from students and staff that we can pass on", say the two members.

In the beginning, several decisions were taken by the crisis team to which the employee and student representatives could only respond afterwards. "It would be nice if there would be more prior communication about the issues at hand sometimes. But we also realise that it is a crisis situation, so we also understand that this happens in an exceptional situation."

Now that everyone is accustomed to online education and work, the structural questions arise

Now that block 4 has just started and everyone is a bit used to online education and working, more structural questions arise, says student member Wijlhuizen. "At the last University Council meeting on April 20, for example, we asked questions about the privacy of students if teachers use the Zoom programme for teaching or if online proctoring is used for examinations. We asked for these programmes to be banned, because there are serious risks though it has not yet been determined how great these risks actually are. We are worried because we wonder if students are aware that their privacy is at stake."

It's a difficult issue, says Wijlhuizen. "We understand that the Executive Board wants regular education to continue as much as possible, but it would have been nice if we could have discussed this beforehand instead of afterwards. By asking the Board about the privacy issues of proctoring and Zoom, it seems as if we are busting them, but we want to make them aware of the fact that there are a lot of hurdles to these programmes in terms of privacy while there are alternatives available, such as Teams, and other types of exams."

De Smidt points to the discussion on the Strategic Plan, which should have been completed before the summer and is now postponed until the autumn. "We are very happy with that and would have proposed it ourselves as well. Due to working online, it is not possible to have good discussions about this within the faculties at the moment. Moreover, the workload involved in working from home is higher. In addition, we think it is important that the plan already includes what we have learned from this crisis. Are there elements from, for example, online education or online working that we want to retain? Perhaps we are going to work in a more hybrid way than is currently the case: part at the office and part at home".

He refers to the research the university is conducting on how working from home is perceived. "That came from a councillor of the Employees' Consultative Body which then reached out to us, but it also appeared to have been suggested elsewhere in the organisation. So we regularly come up with the same ideas as the board."

Because education is online, you encounter the limits of what is possible.

After six weeks of working and studying online, the University Council also focuses on the time to come. The quality of education is a good example of this, says Wijlhuizen. "Because education is online, you encounter the limits of what is possible. For example, education that requires physical presence is cancelled. That doesn't always benefit the quality. You can now also see differences emerging between the online education of one or the other teacher. Some teachers, for example, have children at home who they also have to teach, and therefore have less time to support students if, for example, they have to work in working groups. In that case, students are forced to make arrangements with each other. Other teachers arrange everything for the students down to the last detail and have created a separate channel for working groups. We are now considering the questions of what impact these differences have on the quality of education and whether we can constructively think along to guarantee quality. We need to talk about this internally first.”

As far as the near future is concerned, De Smidt believes that the university should take into account that certain measures will still be needed in September to curb the coronavirus. It is one of the topics the council is considering. "The current crisis may have consequences for the Strategic Housing Plan. Among other things, this plan reduces the square metres per FTE, but how does that relate to the metre-and-a-half society? Much has been said and written about open-plan offices, but in the context of the current crisis, the question is how to keep a good distance in an open-plan office. And what if things never go back to the way they were before the crisis? In that case, the housing plans will have to be adjusted."