From UU student to director of Enter The Wave: ‘We didn't have a clue when we got started’

Coming summer, hundreds of Dutch students will go on a surfing vacation with the travel agency Enter The Wave, a business that started in UU&#39;s lecture halls. UU alumnus Gido Lurvink: “We thought: ‘How cool would it be if we went on a surf camp with a whole bus of students?&#39;” And that’s how it started.

Now in their thirties, Gido Lurvink and Taco Smit, two former students and founders of Enter The Wave, are already busy with the preparations for the summer and are staying in a town on the North Spanish coast. Arrangements have to be made with camping owners about the construction of the tent camps and enforcing the camping rules for groups of more than a hundred partying students who share the camping site with ‘regular’ tourists.

But Enter The Wave is not only about partying. Surfing is an important part of the holiday, and students can take surfing lessons or – if they are advanced enough – stand on the board without supervision. The idea for a vacation that combines surfing with enjoyment was created in 2013 when Gido and Taco went on a surfing vacation in France with their year club of the Rotterdam student association Laurentius. 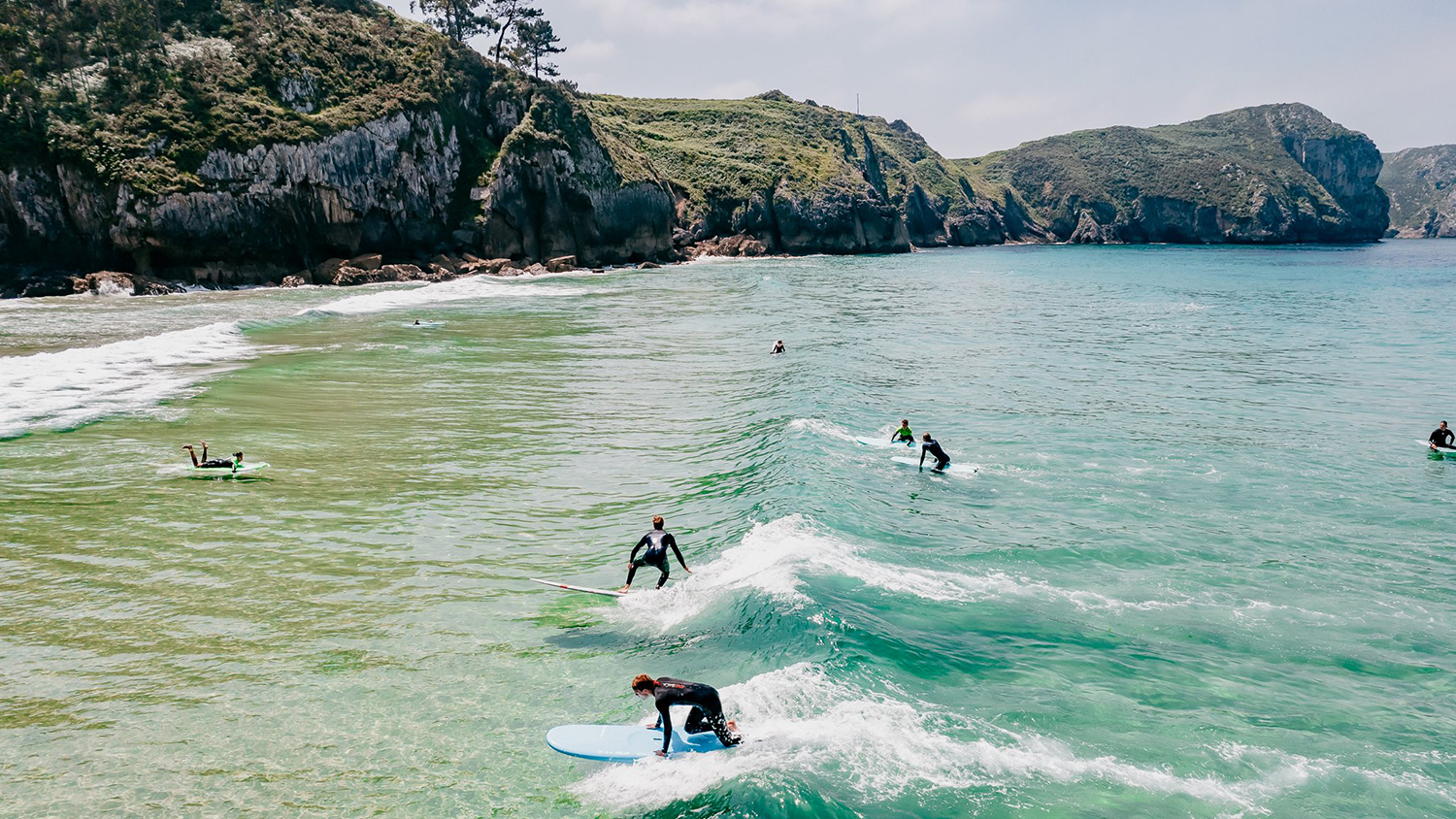 “We were standing on a camping with Dutch neighbours all around us”, Gido says. “That became one large friend group we hung out with for a week. At a certain moment, we were sitting on a couch just nattering, and we thought how cool it would be if we went on a surf camp with a whole bus of students. That idea stayed in our heads and at the end of the vacation, we thought: ‘Why don’t we just try it?’ Then we started to consult with an organisation that organises surf camps, and they gave us the opportunity to try our idea out within their organisation. We got a free vacation out of that.”

We thought: either we start taking this seriously, or we quit

After the first two years, it became clear that they had to choose since the work cost a lot of time and they got little out of it financially. Gido: “We thought: either we start taking this seriously, or we quit.” They decided to go all-in and started for themselves. That’s how the business Enter The Wave originated. Now they organise multiple surf camps in July and August. “Searching campings, making contact with bus companies, a lot more promotion. It was so much work. When I look back on it now, I think: we really had no idea what we were doing.”

Gido took a gap year after his bachelor's and had a job at Olympos next to the work for his business. The year after, he did start a master's degree in Educational Design at the UU but Enter The Wave cost so much time that he did not finish that. Because they had to run a company now, they decided that they shouldn’t organise it only for student associations anymore but that everyone interested could book them. The students of Utrecht University were still a primary target. To reach them, for example, they would stand outside the Langeveld building with flyers before the lectures began. From their own experience, they knew that the first minutes of a class were often dull and that people would be more inclined to look at the flyer they had just received instead of paying attention to the lecturer. Additionally, they secretly put the Enter The Wave logo as background on the monitors in study halls in order for everyone to see it when the computers were switched on.

It was in the young entrepreneurs’ best interest to acquire as many customers as possible. If they couldn’t fill the booked busses and camping spots, they would lose a lot of money. But if they succeeded in bringing together a hundred students on a camping trip, then it would be a great holiday guaranteed – also for Gido and Taco themselves. That gave them the energy to continue.

Because of covid we had to change the entire crew overnight

The covid time was a challenging period for them. Enter The Wave could continue because campsites in France and Spain weren’t closed during the summers. Although they were happy with that, other problems arose. In 2020, they were in the news negatively when students were infected with covid when they got back in The Netherlands. The same summer, the camp in Spain had to be closed due to the new rules of the Spanish government.

“The rules changed every week and were different in every country”, says Gido. “We constantly had to change our entire camp. That was a disaster. Our customer service last year was complete chaos. Additionally, it occurred regularly in 2021 that a few crew members got infected, which made us change the entire crew overnight.” Al those problems caused more than one headache, however, they emerged unharmed and Enter The Wave has only continued to grow during corona. 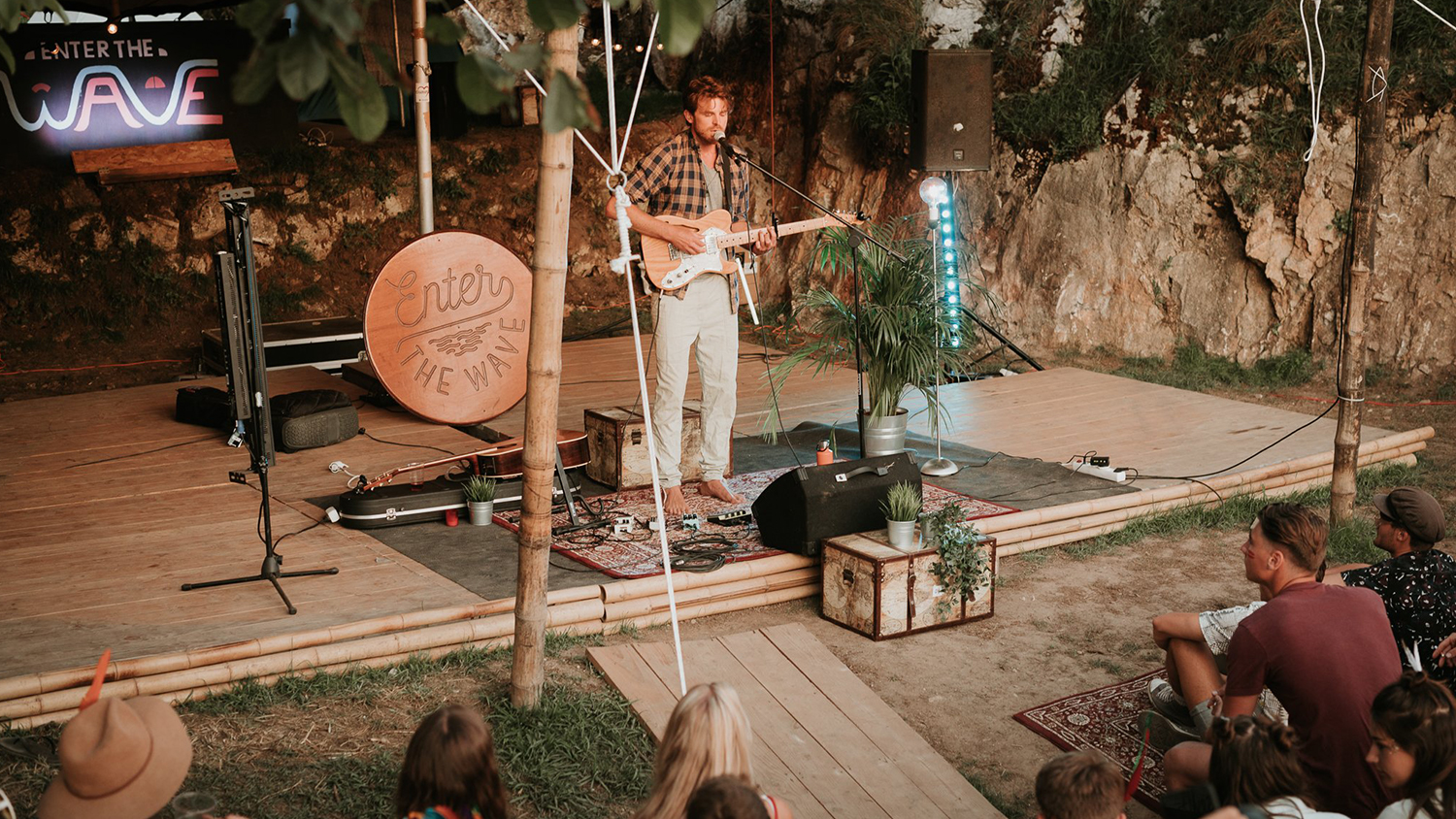 Almost ten years after they started, they now really have the role of director. Gido: “We have project managers, marketing teams and design teams. Last year, we sometimes still made Facebook posts but less and less now. As directors, we are mainly concerned with the strategy. We have to know something about everything now. Managers are coming with questions, and I have to make the decisions.” Although he doesn’t do anything with his studies, he is still glad he did study. “This has taught me to look at our ideas critically and analytically.”

The concept of Enter The Wave is unique compared to other surf camps, says Gido. Not just the participants but also the crew consists for the largest part of students. “We started with one camp and one crew of seven people, including ourselves. We had to take all bar shifts and cleaning shifts ourselves. At a certain moment, the crew members couldn’t handle it anymore, and the participants went to help behind the bar. That’s how the concept started where every student can join our vacation for free if they register as a crew member.” Every crew member works a 3-hour shift every day, including various tasks such as cleaning up the camp and taking care of breakfast. In between they can relax and surf. “Nowadays, every camp includes a crew of at least 25 people”, says Gido. “For them, it mainly revolves around the experience, as it was for us at the beginning.” 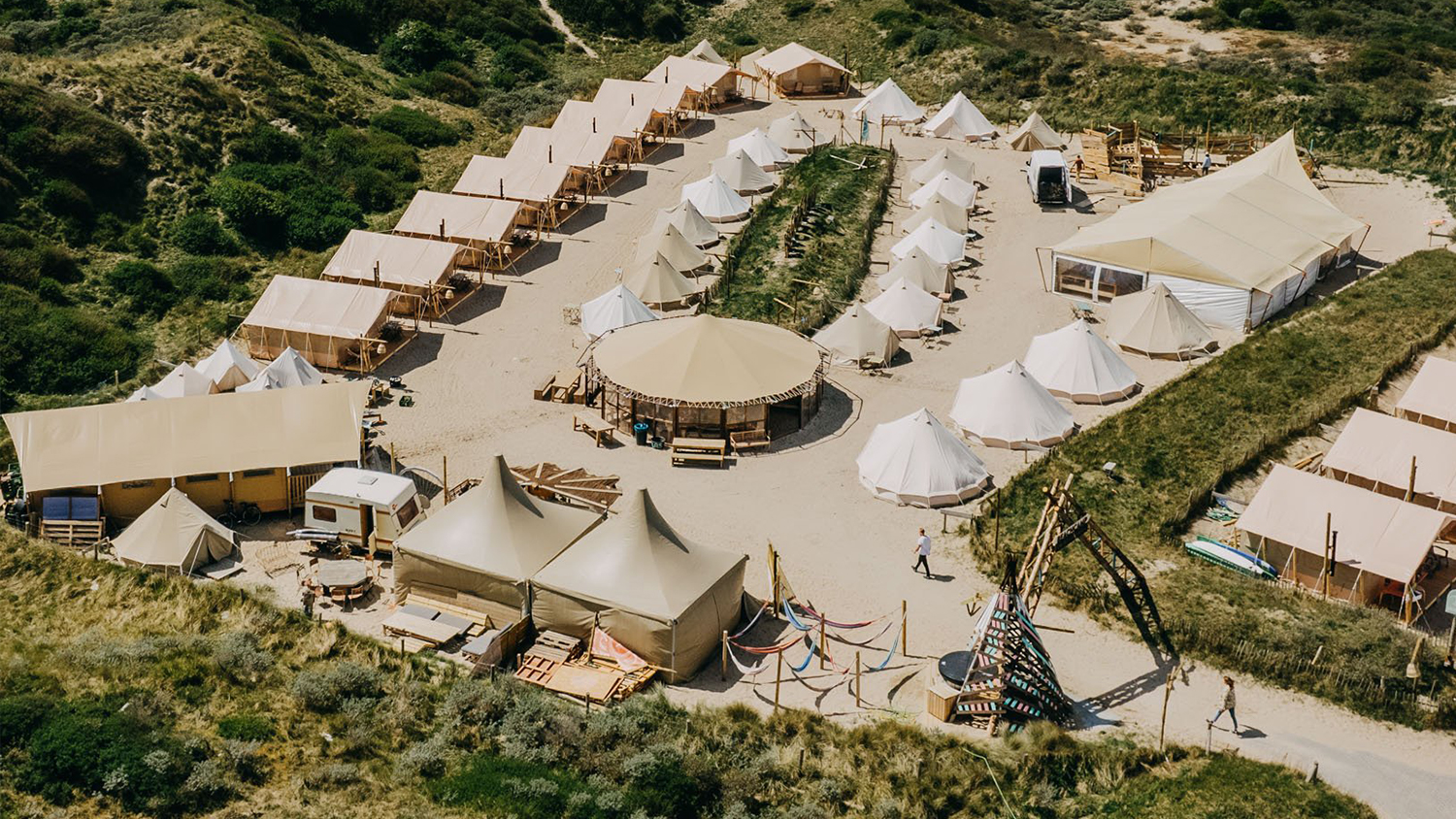 If you think about how we started, I’m very proud of what we have achieved

Juul, who went last year as a crew member for two weeks for the first time and will work this year even for four weeks at Enter The Wave, joins in this. “It doesn’t matter that you don’t get paid. In between the work, I can also surf and party. Additionally, the crew and participants of Enter The Wave form one large community with whom we also meet up in the Netherlands throughout the year. During the winter, you can also join with Enter The Snow, which are ski vacations where a large part of the Enter the Wave community goes to. It is a sort of nice student bubble.” 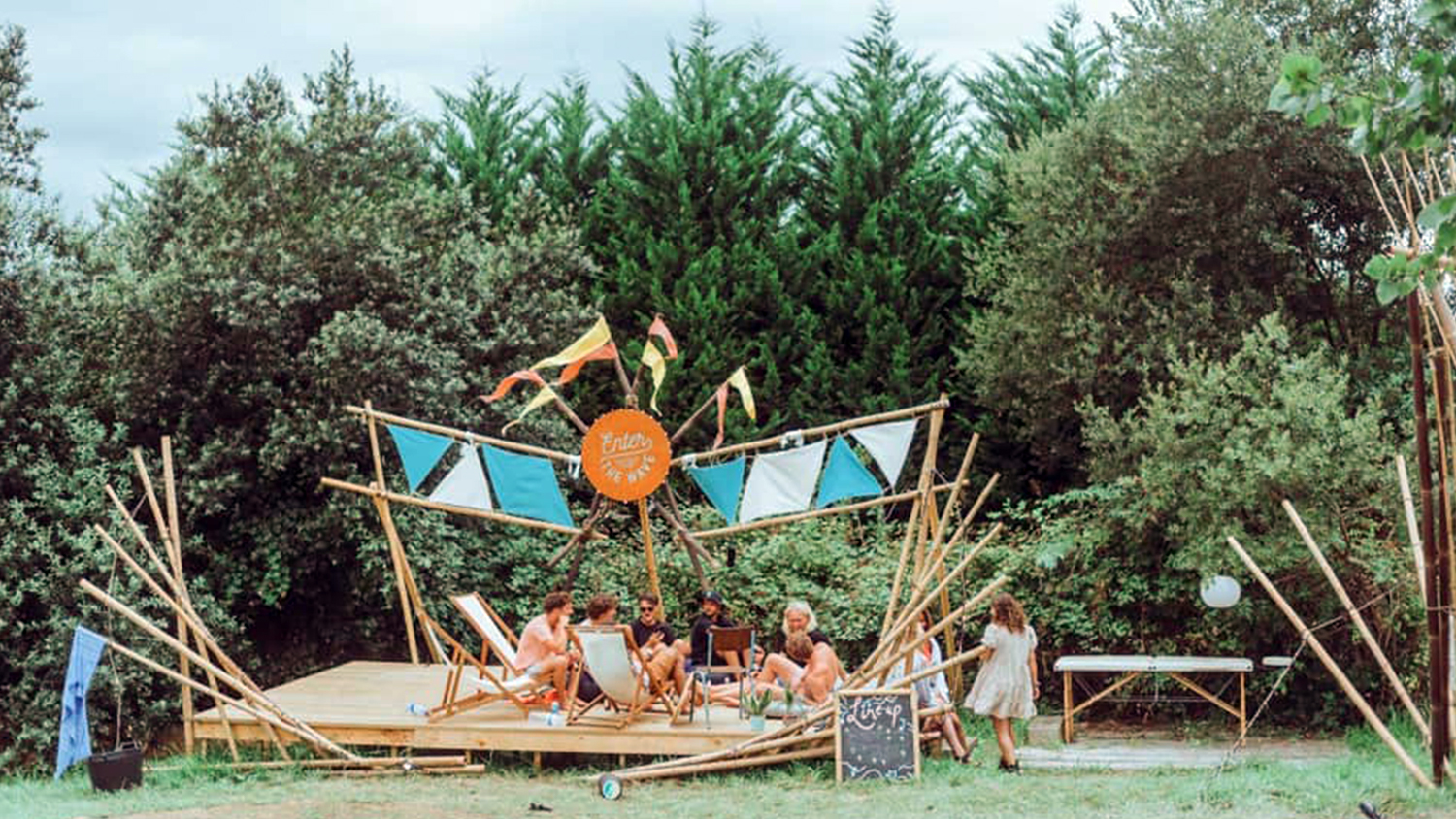 Gido says that he is still present at student parties in Utrecht from time to time but that he is actually getting too old for that. So, together with Taco, he has set up a 25+ camp for the first time this year – for all people like them who enjoy Enter The Wave but don’t feel at home anymore among all the first-year students. Additionally, they organise all kinds of different group vacations like ski vacations, hikes and canoe trips throughout nature in the whole of Europe. They have done so since they started to work together with a Belgian travel agency called Travelbase. “That made the organisation a lot more stable,” says Gido. “If you think about how we started, I’m very proud of what we have achieved. It would be cool to give a lecture one day, for example, about marketing or stakeholder management. And then secretly change the backgrounds of the computer monitors.”