Casa Confetti residents complain about noise pollution: ‘Let us sleep in for once’

The low-rise part of the Van Bunnik building is almost gone, but the noisy demolition works are not. Photo: DUB

Residents of Casa Confetti at the Utrecht Science Park are more than sick of the nuisance that stems from the construction work surrounding their building. So much so that Blanca, one of the residents, is collecting complaints via Facebook with the intent to send them to the municipality. “The demolition work at the Van Unnik building isn’t even done yet, and they’re already starting construction works on the tram tracks.”

Life at Casa Confetti, the multicoloured building in the heart of the Utrecht Science Park, is a lot tess colourful than it seems. Its residents have been putting up with a series of construction works in the surroundings. At the moment, the low-rise part of the Van Unnik building is being demolished and the works include breaking up concrete, which makes for a lot of noise and dust. The demolishion was originally scheduled to be completed by late June, which had the residents of Casa Confetti hoping for a quiet summer. "But then we read in the newspapers that there would be construction works on the tram tracks all summer. So, we'll keep on getting noisy mornings, not to mention the stench from putting new asphalt in.”

That was the final straw for the student. “We’ve had such a stressful year. Most classes and exams were online, so we had to attend them with all this noise in the background. We couldn't even open the windows when the weather was nice because that would just make the noise even worse. There was nothing to do here in the Utrecht Science Park, while those living in other parts of the city seemed to have more possibilities. We really feel as though the municipality’s forgotten about us.”

Fearing more nuisance
The demolition of part of the Van Unnik building started at the end of 2020, and was supposed to last until June 2021, but it is taking a bit longer than initially planned. This month, the province started replacing the top layer of the tram tracks. These works will last until the end of August. In the meantime, the university is also removing part of the bridge between Van Unnik and the library. According to project manager Marc Boekema of UU’s Corporate Real Estate & Campus, the removal of the bridge hadn't been scheduled, but since the tram tracks are going to be closed for all traffic, the university is taking the opportunity to do it now. 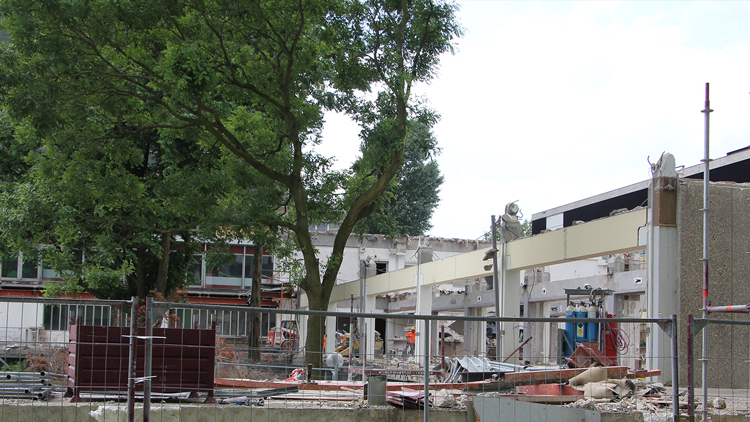 The resident board of Casa Confetti fears it will suffer from continuous nuisance, due to these and other construction works set to take place in the vicinity of their building, like the high-rise part of the Van Unnik building. “They’re also renovating the Administration Building and planning to fix the façade of the Ruppert building, not to mention they have to lay the pipes for the aquifer thermal energy storage nearby,” enumerates chairman Kevin. He’s been living in Casa Confetti for a little over a year now, but can already list all the past construction works that bothered the students. “The construction of the Utrecht University of Applied Sciences, the renovation of the David de Wied bulding, the Leuvenplein, the Ruppert building. People living here have heard all of it.”

Really annoying
This is not the first time that the residents of  Casa Confetti sound the alarm. In October 2019, they complained about the noise pollution caused by construction works, which has led to them being included in the construction plans surrounding the student housing building, with a monthly meeting taking place between the residents, the contractor, and the university. In this meeting, the three parties discuss upcoming construction works and deal with complaints, reports, and suggestions sent through the email address vanunnik@uu.nl. “I can imagine they have had enough. The sound travels upwards quite easily in this building. We strive to make the best possible agreements so we can reduce the nuisance as much as possible when realising sustainable research and education facilities," declares Marc Boekema of Corporate Real Estate & Campus.

One of those agreements entails that the noisy construction work at the Van Unnik has to take place between 8:00 am and 8:45 am, in order to limit the disturbance of students’ nights’ sleep, classes, and exams. Now that the academic year is almost at its end, the residents were hoping that the works would be moved to a later time of day, but that’s not possible, says Boekema, because some students are still taking resit exams, or have a lot of classes to catch up on, not to mention the Utrecht Summer School is set to start soon. “I do feel for them. According to our current planning, the noisiest demolition work is scheduled to be completed around July 23.” 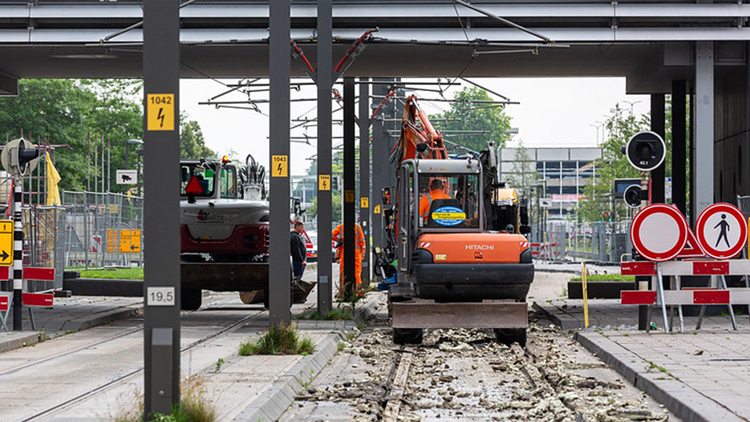 Ron van Dopperen, communication officer for the tram, says the renovation works will take place between 7:00 am and 11:00 pm at the latest. However, contrary to the works at the Van Unnik building, the works on the tram tracks will be carried out on weekends as well. “But there won’t be any noisy work after 9:00 pm,” he guarantees, saying he’s only received two complaints about the renovation works on the tram tracks so far, both concerning a Monday night, around midnight. “But we checked those complaints and our contractor says there was no construction work going on at that time.” He adds that complaints are always taken seriously. “If they’re justified, we’ll find a solution.” However, he denies that the residents of Casa Confetti had to find out about the construction works through the newspaper. “We informed them in advance, through a mailing sent by housing corporation SSH. We also communicate with them regularly to make sure they’re informed.” Finally, he notes that the top layer won’t be made of asphalt, but rather concrete. There will be no asphalt stench, therefore.

Headphones
Kevin, from the residents’ board, fears there’s not much they can do about the nuisance, but hopes that students will be invited to get involved at an earlier stage of future construction works from the municipality or province of Utrecht, similarly to what the university is already doing. That way, they can have a voice in preventing nuisance and noise pollution. He’d also like to be compensated by the university or by housing corporation SSH. In his view, residents deserve to get noise-cancelling headphones or fans for the hot days in which they can't open their windows. “This building has a lot of studios, which means a lot of the residents are older students who want some peace and quiet.”

Blanca has heard from several residents that the noise has made them flee the building and temporarily move in with their parents to work on their thesis. She thinks most residents would prefer the noisy work to take place in the evenings. “That way, they can sleep in sometimes.” She knows the municipality isn’t the place to complain about construction work done by UU or on the tram tracks, but she hopes they will tell her they understand the students' complaints, and have consideration for the fact that they've already had a particularly tough year. “It would be nice if the municipality would let us know that we matter, too.”