Illustration of the entrance of the new garage.

The parking lot in front of sports centre Olympos will be replaced by a garage with room for 320 parking spaces of which two hundred will be available to visitors of the Utrecht Science Park. A total of 840 solar panels will be installed on the roof, which will generate more power than the garage needs. The university is considering using batteries to store the energy.

In the past few years, several parking lots have been removed from the utrecht Science Park: for example, at the Heidelberglaan, Leuvenlaan, and the Leuvenplein. To compensate for this, Utrecht University is turning the parking lot in front og Olympos into a four-storey parking garage. Currently, the parking space has room for 120 cars, but it will soon

have room for two hundred more. The construction works started in April and the garage is expected to be completed by November.

The main reason for building a new garage there is to have fewer cars in the centre of the campus, says project manager Kevin Dijke from Corporate Real Estate & Campus. “Olympos is on the outskirts of the USP. We’re trying to stimulate people to park there and then cycle or walk towards the campus centre.”

The new garage will exist for about fifteen years, Dijke adds, explaining that the university also plans to build more parking spaces at the outer limits of the USP. “We’re talking about plans for over twenty, thirty-five years. The fact that this parking garage is temporary doesn’t mean we won’t have a parking garage in this location.”

The project manager adds that the garage being built is going to be out of the ordinary. “It’s circular, and fully dismountable”. All the parts can be transported and reassembled elsewhere, "which means we could build the garage in another location at the USP in the future, or maybe even sell it.” 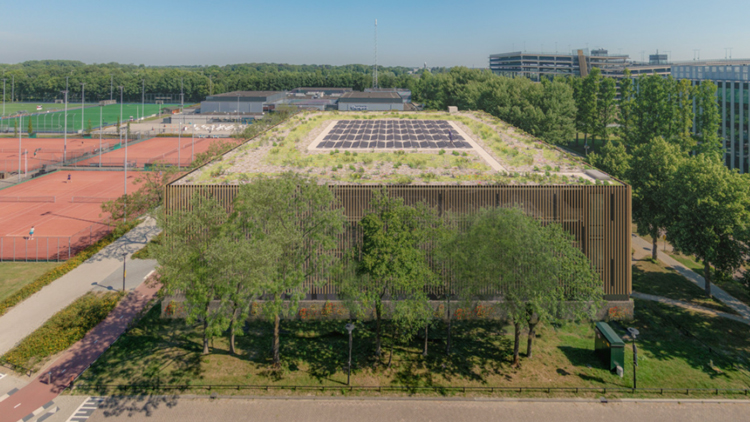 Besides being reusable, the materials were also chosen based on their sustainability. The garage is the first building at the Utrecht Science Park that will not just be carbon-neutral, but actually generate power. “The roof will be completely filled with solar panels”, Van Dijke explains. “We want to make the best use possible of the roofs, since they are suitable for solar panels. That will help us reach our goal of being fully carbon-neutral by 2030. By that year, all energy generated by Utrecht University will have to be green.”

The solar panels will generate the energy necessary for the garage’s lifts, lighting, and camera system, among other things. It will also provide energy for the 48 charging stations for electric cars. This number could be increased to 72 later on.

The university is investigating the possibility to do more with the solar panels than just generate energy. “We’re working on creating a battery package that can store the energy generated by the solar panels. We’ve got our own electricity network at the USP. When you need energy, or generate enough to give back to the network, there’s a peak in the net. The battery pack would reduce the peak, which means energy would be used more equally and in a cheaper way.” The university is still not sure whether it will use this battery pack or not. If so, the garage will be able to generate energy during the day, store it in the batteries, and then use it at night for other buildings.

The parking garage is publicly accessible, so it will not be available just for those who work or live at the USP. The parking fees will be the same as at most other parking spots: 90 cents for 30 minutes from Monday to Friday.