‘There are many misconceptions about globalisation and climate'

Protest against the planned widening of the A27 highway, which would require cutting some 340 trees. Photo: John Akerman Özgüç

Is the Netherlands going to meet its climate targets? What about Europe and the rest of the world? People tend to defend their positions fiercely, but what if you don’t feel informed enough to form your own opinions? That’s why Social Geography and Planning teacher Ton van Rietberger decided to write a book on globalisation and the environment.

On December 6, Economic Geographer Ton van Rietberger joined 2000 others and cycled to Amelisweerd, a green space in the outskirts of Utrecht, to protest against the planned widening of highway A27. To do so, some 340 trees will have to be cut down from the forest.

According to the teacher, it isn’t necessary to have more lanes on the highways because cars will play a smaller role in cities, especially after the coronavirus pandemic showed how quickly traffic jams can disappear if people change their behaviour. While writing his book, he became even more convinced that we can no longer go on thinking in terms of economic growth alone.

He’s annoyed by the discussions about environmental issues in the media, as he finds that they don’t really inspire people to adopt the broad perspective he deems necessary when looking at these problems. "Talk shows usually put a sceptic against an avid climate activist, so that debates become polarised. Often the problems are only highlighted from one particular point of view, such as that of the Netherlands, or of nature, or of the economy, for example. A broad perspective, taking multiple sides into account, allows you to really get to the roof of the environmental problems.”

Interdisciplinary
These are precisely the topics he teaches to UU Bachelor's and Master's students. A couple years ago, he also taught the course Globalisation and Environmental Impact at the Hovo Utrecht (Higher Education for the Elderly), an educational facility of both Utrecht University and the Utrecht University of Applied Sciences, offering courses at professional and university level. "Those are usually older, highly educated students who would still like to learn more," says Van Rietberger. "They are therefore very motivated.”

Before starting the course, he advised his forty Hovo students to read the book De Onvoltooide Globalisering (The Uncompleted Globalisation) by Paul de Grauwe, who was a professor at the London School of Economics. "‘You don’t have to buy it,’ I always said in the e-mail, but at the first meeting they were all sitting with that book in front of them, and most of them had read it completely.”

He always prepared material for only an hour. "The other hour was dedicated to discussions.” What a difference from the Bachelor’s and Master’s students he usually has in front of him and to whom he gives similar courses such as Globalisation and the e-module World. "When I recommend a book to them, they usually don't buy it and don't read it. But that can be explained by the fact that, in addition to studying, they are building a social life.”

Technical Solutions
Van Rietberger did not teach the Hovo course on his own, however. He was responsible for four of the eight lectures and the other four were given by colleagues from the Faculty of Geosciences. He managed to entice Professor Pieter Hooimeijer to give a lecture on demography, Professor Appie Sluijs to explain the relationship between CO2 and climate, and Innovation Scientist Jacco Farlo, who was a lecturer at UU until recently, to shed light on possible technical solutions to save the climate. "The different disciplines of our faculty came together in this course,” he says, explaining that this combination gives students a more complete picture of how poverty, wealth, economy, politics, industry, buildings, and innovation affect the world’s climate.

A Hovo course as a basis for a book
The course, which was held successfully for eight consecutive years, gave Van Rietbergen the idea of bundling its content in a book about globalisation and the climate. Globalisering: Ramp of Redding (Globalisation: disaster or salvation), subtitled Een speurtoch naar de oorzaken van milieuproblemen en ongelijkheid (A search for the causes of environmental problems and inequality) was released in Dutch on December 4.

He started writing it six years ago, but really put his mind into it last year. Much of the knowledge of his colleagues from the Hovo course has been included in the book, with graphs and tables by Margot Stoete of Geo-media. As his publisher puts it: 'This book tries to create order by listing both the facts and the discussions. It shows that globalisation is not a disaster, but can become our salvation'. 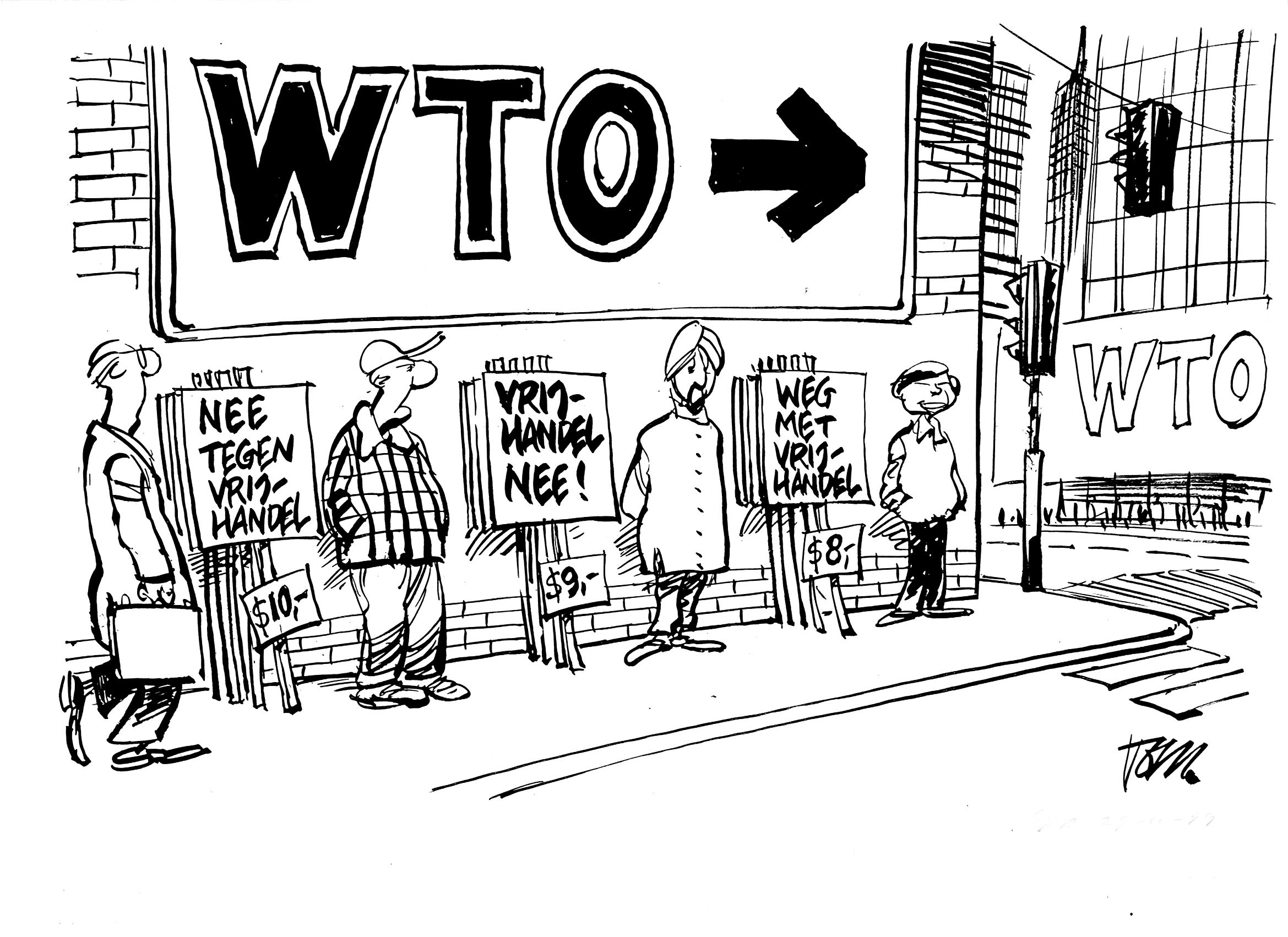 Cartoon by Tom Janssen as included in the book. Signs saying "Down with free trade!" for sale at WHO's door.

"My book is fairly nuanced. That will take some people a while to get used to, because many of them often misjudge reality. This is also evident from a mini quiz by Hans Rosling, which I always have my students do at the beginning of a course. It is a short list of multiple choice questions that have to do with sustainability. I do this to show the students how many misconceptions there are. Most people score really badly -- and yes, really, often less than chimpanzees. The students' scores are a starting point for my lecture.”

The climate can be saved
According to Van Rietbergen, there is still a lot to be saved regarding the climate -- he is an optimist. "A combination of technology and moderation will take us a long way. For example, my book states that solar and wind energy can largely meet our energy needs. We still have to work on a way to store this energy. I therefore also believe that all energy subsidies should go to alternative fuels in order to find a solution for storing wind and solar energy.”

"Moderation helps as well, because if we cut our energy consumption in half, we would need to generate a factor 6 less energy. What also helps is that the world's population will start to shrink from 2065 onwards. Japan, for example, will only have 83 million people in 2100 -- that used to be 125 million. If, in the Netherlands, instead of all those processes, we simply adopt Urgenda's 40-point plan and change our eating pattern and introduce a car-free Sunday twice a year.... Above all, the world needs to start working together again. After all, that is how we solved the ozone problem.”

Can you read in Dutch? Globalisering: Ramp of redding, een speurtocht naar de oorzaken van milieuproblemen en ongelijkheid (Globalisation: disaster or salvation, a search for the causes of environmental problems and inequality) is for sale at Boekscout for 22.50 euro. DUB is also giving away three books, here’s how to participate.