Global Sustainability Science students Finnur Ricard Anderson and Sebastian Fortineau are looking to start a new climate initiative. They are building a network of UU students and employees to persuade the Executive Board to take more action against climate change.

This is not the first time that Finnur Ricart Anderson and Sebastian Fortineau make strides in the world of climate science. Sebastian has his own foundation to reduce plastic waste in open waters, called Surf’n’Clean, and volunteers for Planet Patrol, an NGO targeting single-use materials.

In addition, Finnur is a UN youth representative for the climate in Iceland: “The role of a representative is very clear, whereas the network we’re building is somewhat freer. I don’t necessarily see myself as having a head start because of my international experience as we’ve got far fewer connections in Utrecht than I have in Iceland. But the experience we have does give us a better idea of what can work, realistically, to combat climate change.”

Adding a sustainability module to every study programme is the first plan presented by The Climate Action Network. “Sustainability is essential, so it’s important to raise awareness”. Finnur and Sebastian aim to discuss the topic with the Executive Board soon. 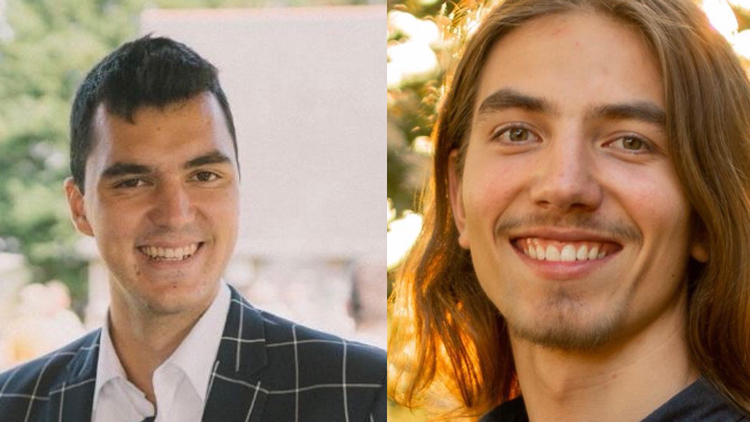 Sebastian and Finnur. Photos: courtesy of the two students

The idea to found this network came about following a lecture about the IPCC Climate Report, which lays out the most recent scientific findings regarding the climate. “We thought: ‘how much more could we achieve in battling climate change if we were to unite all the people interested in contributing something?’ We could come together to encourage the Executive Board to take action.” Finnur emphasises that everyone who’s connected to the UU can join the network.

They are already in touch with several people. Finur: “We’ve got around fifteen teachers and a lot of students from our programme who are interested in the network. We’ve asked people to join us, and so far, everyone’s responses are very positive.”

Addition to the university
The Climate Action Network isn’t the first climate initiative born at UU. The Green Office organises numerous projects to make UU more sustainable and increase biodiversity at the Utrecht Science Park. Protest group University Rebellion, which is connected to Extinction Rebellion, also makes itself heard regularly. Earlier this year, they asked the university to declare a state of emergency with regard to climate change. Anderson used to be an active member of University Rebellion. “ But then I realised that they accomplish little because they don't have a large constituency. I also think their demands could be more realistic sometimes. That's why I prefer to direct my energy elsewhere. The Green Office is very integrated into the university, so I think they’re limited in what they can achieve. What we’re aiming for is enacting change by collaborating with the university and talking to the board, rather than organising radical protests or limiting ourselves to merely voicing criticisms. Having people join us in our plans is the most important thing to us.”

For more contact, you can reach the students by mail:uucan.info@gmail.com