With its 570 metres, the rainbow-coloured path at the Utrecht Science Park is the largest one in the world. Photo: DUB

Utrecht University was criticised by many following the decision to paint a rainbow on one of the bicycle paths at the Utrecht Science Park. PhD candidate Maranke Wieringa, from the department of Media & Culture, thinks it&#39;s a beautiful symbol but it shouldn&#39;t hide the fact that the university still has a long way to go to become really inclusive.

The world's largest bicycle path is currently being painted at the Utrecht Science Park. Despite being a queer person and a big fan of similar bike paths around the world, I’ve got mixed feelings about this project. I don't mean to speak ill of the initiative, but considering the state of inclusion at the university right now, it seems as though you’ll only find a pot of disappearing leprechaun gold at the end of this bicycle path.

The three educational institutions at the Utrecht Science Park (UU, UMCU, and HU) aim to use the bicycle path to "show that everyone’s welcome to be who they are completely". The symbol of the rainbow was chosen to represent inclusion and diversity in the broadest sense of the word. That is to say, this rainbow path is not meant to only celebrate sexual and gender diversity, but also the other axes of difference, like skin colour, social class, and (dis)ability.

There are things that can be said about this co-opting of the rainbow flag, as it obscures the other axes of difference, but for now, let’s roll with it. As a queer person with a disability who works at UU, I’ll paint a picture of the state of inclusion at the university as I experience it. To make matters less abstract, I’ll start with two examples.

HR system says no
If you’re genderqueer and you want to adjust your pronouns in the HR system, you’re in for a rude awakening. The salutation (‘sir’ or ‘madam’) can’t be adjusted in the IT systems by the staff member. Perhaps it can be changed by HR, but this presents thresholds high enough that, even in the best-case scenario, there’s a policy of determent, be it consciously or unconsciously.

The example of the HR system shows that UU, despite the developments on aspects like gender-neutral bathrooms, has quite a long way to go with regards to LGBTQIA+ inclusion. That means it’s still lacking in the inclusion originally represented by the rainbow flag. What about the inclusion in the other axes of difference? Given my own background, I’ll focus on how inclusive the university is for people with disabilities:

Failing the accessibility test
Recently, an accessibility test was done to check how accessible the buildings, offices and classrooms are. As a part-time wheelchair user and teacher, I was enthusiastic about that, because it’s an annually recurring drama to arrange for accessible classrooms. However, this test only checked whether you can enter somewhere – not where you can go once inside that room, so it didn't evaluate things like being able to reach the whiteboard or the computer, for example. That means that once classes resume on campus, I will still have to make sure I'm scheduled in rooms where I don’t have to teach from the back row of the lecture hall.

Both examples show how the university assumes certain standards and ranges of diversity that are tolerated (or not). In the example of the accessibility test, for instance, accessibility is facilitated more for students than it is for staff. Both types of diversity (queer and/or disability) have in common that they encounter the same rigid structures and standards, but in other ways, they’re hugely different. Combining them under a single flag neglects that diversity and squashes the unique issues that come with these experiences.

As a queer person with a disability, that difference is painfully clear. Diversity and inclusion at the UU focuses, for the most part, on colour, gender, and sexuality. There’s barely any attention for my other axis of difference: disability. When there is attention for it, then it focuses almost exclusively on the student perspective, as the accessibility test shows. Of all the ‘-isms’ diversity and inclusion are about, ableism at the university structurally draws the short straw. (If you’re thinking ‘ableism, what’s that?’, you’re not alone. No worries, I’ll explain.

Brains on sticks
At the university, but in society in general too, there’s often this (implicit) assumption that we’re ‘brains on sticks’. Or, as a scientist once told me at a career event when I was a Master’s student years ago, when I asked how people in science dealt with people with disabilities: ‘your body is irrelevant, we use our heads here’. Unfortunately, that head does tend to be attached to a body, and not everyone’s bodies meet the standards.

In practice, this leads to issues. A recent study by the Netherlands Institute for Social Research, for instance, underlines how many thresholds there are for people with disabilities in daily life and social life. The same problems can be found at the university. I’ll give a few examples: having to take a 5-minute detour for the wheelchair-accessible entrance, which has to be manually opened by the doorman who has to leave his spot at the reception desk to do so; it can take months to arrange a (somewhat) accessible workplace; students get stuck in the system. There’s a huge web of inaccessibility, which causes people with disabilities to become handicapped at the university. *Become* handicapped? Yes; there’s a difference between having a disability and being handicapped.

No one knows, no one knows, that it’s called (institutional) ableism
There are different handicap models. In the Netherlands, we often still work with the medical handicap model. In this model, a body-that-doesn’t-cooperate is ‘broken’, because it doesn’t meet the standard. The fact that I’m unable to get upstairs because I can’t really walk up the stairs is, according to this model, my ‘fault’. After all, I’m ‘broken’, so my body is to ‘blame’ for my inability to fully ‘participate’. Chronic illnesses and congenital disabilities make this ‘heal or perish’-approach untenable, however.

A different model is the social handicap model. This model is the foundation of the UN treaty on disabilities, which is also signed by UU. In this model, disability and handicap are pulled apart, because a disability is something you have, but the handicap is when, for instance, there’s no lift to take me upstairs. Because: if there is a lift, I don’t experience any trouble, and so I don’t have a handicap. The social model distinguishes ‘handicap’ as obstacles in one’s environment which prevent someone from ‘unlimited’ participation.

Handicaps arise because, simply put, no one thought to consider the bodies-or-heads-that-won’t-cooperate in how we function as a society. This is called ableism (the Dutch word, validisme, isn’t well-known yet). Ableism is to disability what racism is for race and ethnicity, and sexism for gender. Several types of ableism can be distinguished, but for now, I’d like to focus on institutional ableism. Institutional ableism means that within society or organisations, there’s no consideration of people with disabilities, because a healthy body (or head) is the standard. Those ‘brains on sticks’, that is.

Dissimilar but equal
In the encouragement and embracing of diversity and inclusion, as a scientific community, we should appreciate the dissimilar experiences of queers, people with disabilities, people of colour, first- and second-generation students, and so on. However, that can’t be done until we acknowledge the specific obstacles for the various axes of difference. Putting everything under the umbrella of the rainbow flag is problematic, because it squashes the variety of experiences and subsequent structural issues. The obstacles faced by someone with a disability aren’t the same as those experienced by a person of colour, a queer person, or a first-generation student, after all. The system that excludes is the same, but the ways in which exclusion is caused – for instance, institutional ableism or systemic racism – are different, which means they require different solutions.

Cardboard and leprechaun gold
If we assume that this rainbow bicycle path indeed symbolises inclusion in the broadest sense of the word, it’s ahead of its time. Right now, the university’s not nearly there yet. A rainbow bike path and a promise of a wheelchair lectern in the University Hall room are beautiful symbols. However, as long as there’s no structural, intensive decisiveness on all axes of differences, these remain empty symbols. Because if you happily bike along a rainbow path and then arrive at a classroom you can’t enter, it rather feels as though you’ve found a pot of cardboard and leprechaun gold. 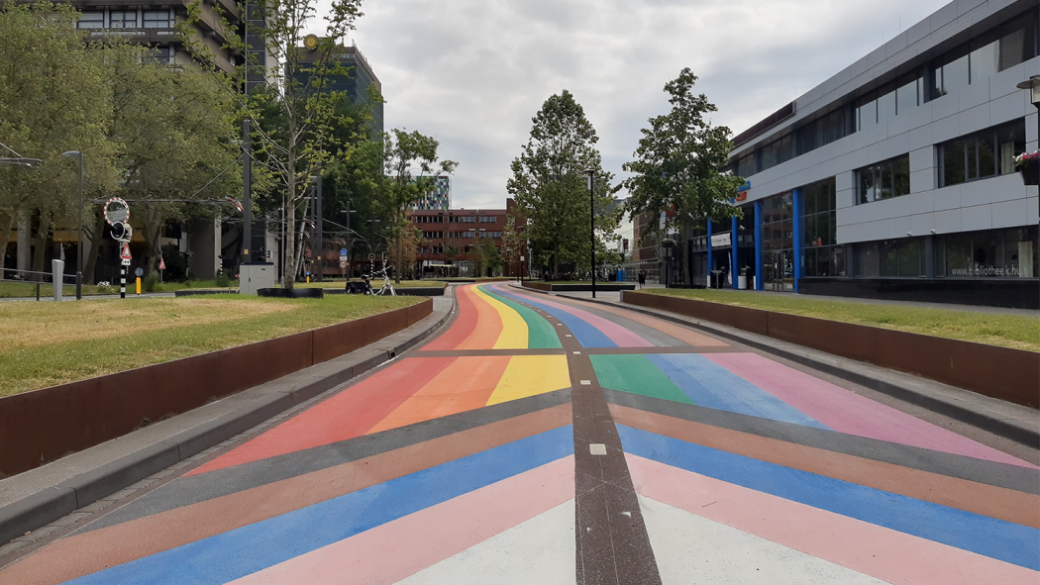