Russian and Eastern European UU students: 'This war must end as soon as possible'

The Russian invasion of Ukraine is suddenly changing the lives of UU students and staff from Russia and neighbouring European countries. Their relatives feel the consequences of the war directly. "As a Russian, I am ashamed of Putin&#39;s actions."

Viktoria Sergeeva is a Russian student in the fourth year of a Bachelor’s in History at UU. Her dad’s side of the family lives in Ukraine, while her mother’s side lives in Russia. She says she is “terrified, angry and ashamed” about the war. “It’s like we are killing our brothers”.

“This breaks my heart”, she continues. “My family in Russia is stuck there, and they’re going to be impoverished because of those sanctions. My friends might be drafted at any minute. They already received letters saying they may be conscripted to fight. This is my life now”. Her family in Ukraine is safe for now.

Dangerous
Viktoria has been living in the Netherlands for four years, but back in Russia, she went to “every protest against Putin possible”. Now, she’s been using her social media to oppose the war, calling it by its name, and tell people to take the streets to protest. Being so vocal can be dangerous in Russia. Last week, Russian laws to punish anyone spreading “false information” (as defined by the regime itself) have become even stricter, with people facing up to 15 years in jail. As a result, several news outlets, including the BBC, have suspended their operations in Russia fearing prosecution.

For this reason, Viktoria fears she cannot go back home. “I wear a ring on my ring finger that says Russia. That’s how much I love my home country”, she says, tearing up. “But if I go back there, it’s a question of weeks before they get to me. The cops in my town know who I am”. The student sees no alternative other than asking for asylum in the Netherlands.

But, here in Utrecht, she’s afraid of a growing anti-Russian sentiment. “Across Europe, we’re seeing that people are starting not to like Russians anymore”, sighs the student. She finds the attitude understandable but stresses that not everyone supports the war. In addition, not everyone understands what she is going through. “I hope people will reach out to us more. I struggle to talk to friends because this is all I can talk about. When I tell them about what is happening and what my family is going through, most of them say ‘oh, I hadn’t thought of that’”.

Viktoria feels that Utrecht University should support its Russian community more. When DUB spoke with the student, the only statement the university had issued was on Instagram Stories, where posts disappear after 24 hours. She was disappointed. “I think UU should say ‘we stand by our Russian students as well because we realise that you live in a pretty messed up country’. Maybe UU should set up a fund or something to help Russian students finish their studies or help them with legalities like a residence permit”. Since then, UU has sent all students and staff an e-mail announcing that the University Funds is soon going to start a fundraiser to help students and employees affected.

Offering them a roof over their heads
Ema Vrînceanu, a third-year Economics student, comes from a village in Northeastern Romania, about a two-hour drive from the border with Ukraine. The consequences of the war will therefore be directly felt in her hometown, where the influx of refugees is huge, according to Ema.

Many residents have been hosting refugees in their homes themselves, including Ema’s mother. “The Romanian government didn’t even have time to react. The number of refugees, and how fast they arrived, surpassed all expectations”. 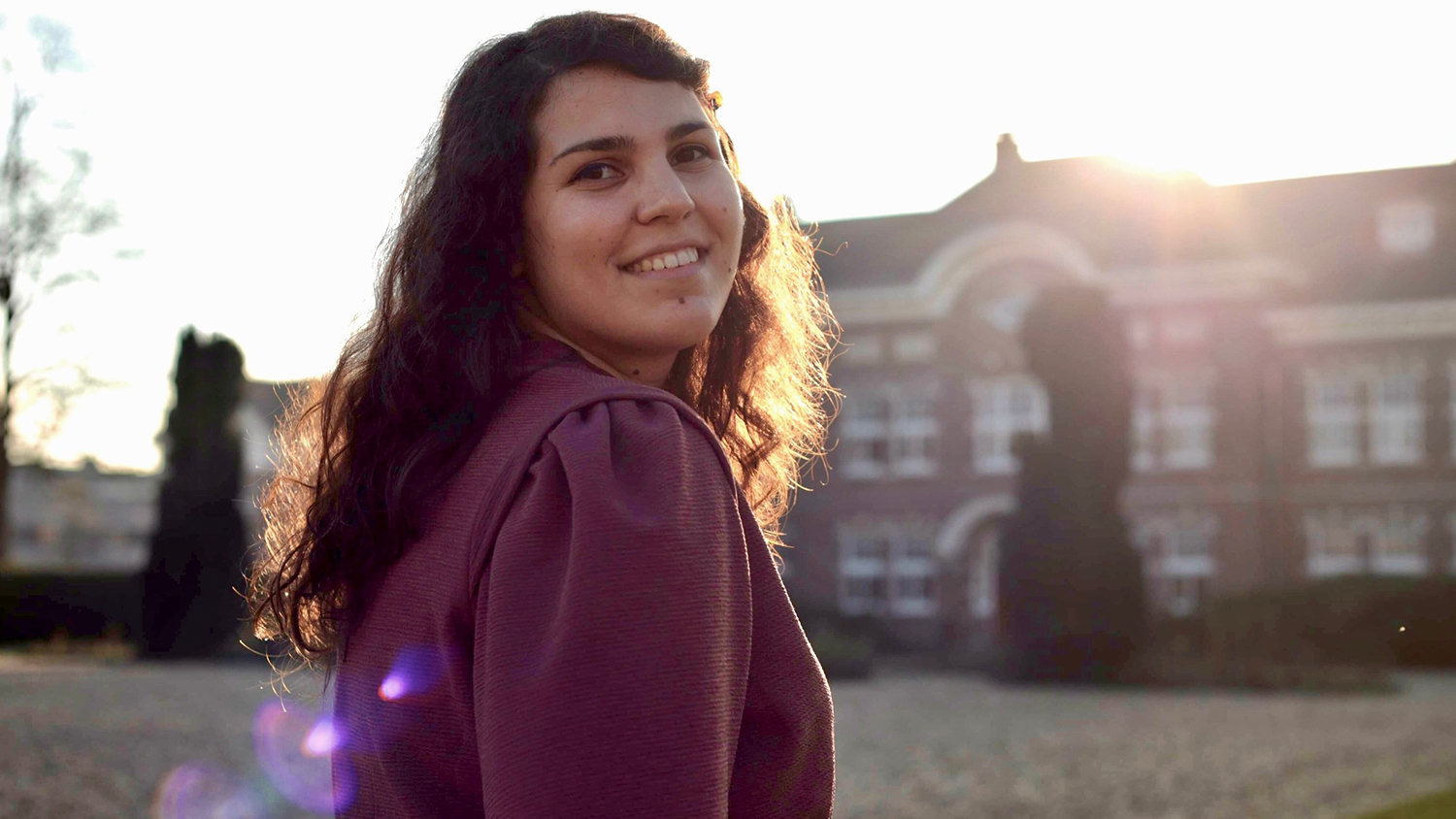 Among the refugees, there are many children, which Ema finds heartbreaking. “They don’t know what’s going on, they’re confused and crying”. The fact that few Ukrainians speak English makes it “hard to communicate with them and help them”.

Shock
Ema is frustrated that she’s so far away from home right now, as she would like to be in her home town to “host refugees and collect donations”. Here in the Netherlands, she does what she can, such as sharing information on her social media and reaching out to Ukrainian refugees to put them in touch with other people. “If they need help, I indicate the people I know who could meet them at the border”, explains the student. “It’s just social media, but people react to it. This way, I can help at least one person”.

She was in shock when she heard the news that Russia invaded the neighbouring country. “This really hits close to home. All the Ukrainian cities that are under attack right now, and the people that are in danger, it's so hard to comprehend. What is happening right now is so unfair. This war must end as soon as possible.”

But Ema is far from being the only UU student to whom the war hits close to home, of course. There are also students from Ukraine and other neighbouring countries. “It would be great if the university would offer a space where these students could meet, talk to each other, and support each other”.

Russian family
UU teacher Andrei Petoukhov, who comes from Russia, has been following the tensions between Russia and Ukraine for quite some time but says he didn’t expect a war of this magnitude at all. “I have no words”, says the lecturer, who has been living in the Netherlands for 25 years. He has Dutch nationality.

“I was incredibly in shock when I realised that Putin was going for the entire country. I expected him to take over Donetsk and Luhansk, but not the rest”. According to Petoukhov, this is a sensitive topic for Russians as well. “The Second World War is still a painful topic for many people in Russia. Many families have lost relatives, especially in my parents’ generation”. 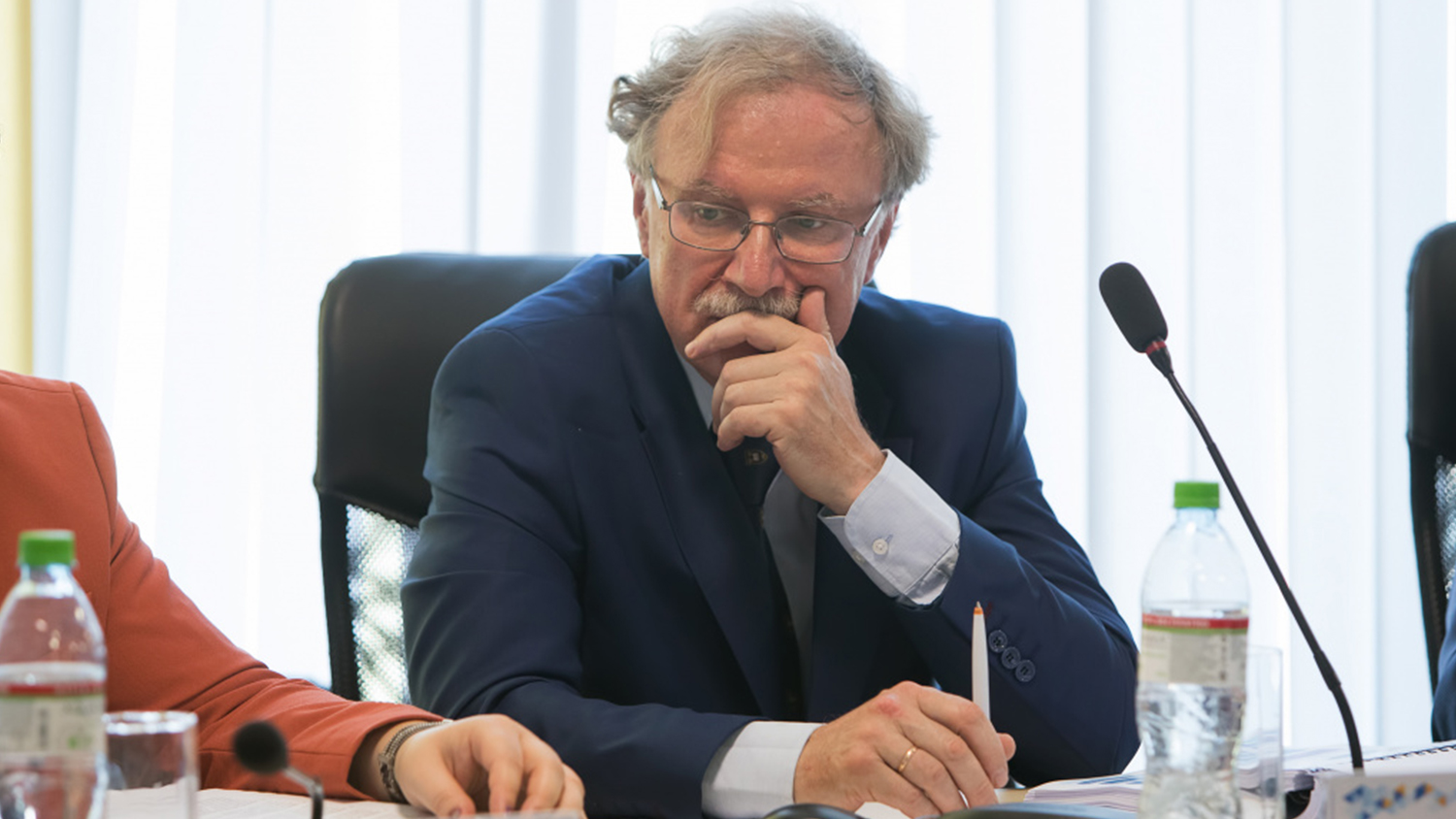 Andrei Petoukhov in a council meeting in Kaliningrad. Photo: courtesy of the teacher.

Petoukhov is already feeling the impact of the sanctions imposed by the West. “I wanted to help my family in Moscow by sending money to them”, says the UU teacher. But now that Russian banks have been excluded from the SWIFT system, he doesn’t know whether the money he transferred right after the war broke out actually reached its destination.

International cooperation
In response to the Russian invasion of Ukraine, Petoukhov gave up his position in the international advisory council of the Immanuel Kant Russian State University, in Kaliningrad. The council maintained the university’s international relations. Petoukhov preferred not to be part of an international council anymore, now that Putin is severing international ties.

The teacher has been worrying about the situation in Russia for a long time, especially regarding the increasing polarisation he perceives in his country of origin. “Because of the war, this polarisation has gotten even worse. On the Internet, there are two groups constantly fighting with each other. Right now, it’s only words, but that could escalate”, fears Petoukhov. “Currently, Putin has the power and influence over the police and secret service. How many lives is it going to cost to get him out? And what is going to happen then – will Russia be a democratic country or somebody even worse is going to take his place? Either way, it doesn’t look good”.

Respect each other
Even so, he prefers to avoid political topics in his personal and professional lives as much as possible. He has no intention of posting either a Ukrainian or Russian flag on Facebook. “I am against the war, but I don't want to take sides”, states the academic.

“Putin has some weird ideas on his mind. As a Russian, I’m ashamed of his actions, but Ukrainian politicians have made mistakes, too”. As an example, the UU teacher mentions the tensions surrounding language in Ukraine, with Ukrainian being given preferential status by law and Russian increasingly being pushed aside. “Many Ukrainians have never learned Ukrainian at school, so they only speak Russian. That’s particularly difficult for the older generations”.

For this reason, Petoukhov asks for both Russian and Ukrainian students to be tolerant. “Please respect each other’s opinions. Even when you don’t agree with it”, he pleads. “And feel free to share your own perspective on things, as luckily we live in a country where that is allowed. As long as that doesn’t encourage war or violence, of course”.

DUB also spoke with three Ukrainian students about their experiences and perspective on the war.