Once again, the number of international students in Dutch higher education has grown. Exactly 85,955 internationals from 170 countries are doing a full study programme this academic year. That’s 11.5 percent of all students, says internationalisation organisation Nuffic, based on the final registration data. Last year, the share of internationals was 10.5 percent.

Italians catching up with Chinese
Most internationals are from Germany (22,584). The Italians (4,814), however, are finding their way to Dutch universities more and more often. This year, they’ve overtaken the Chinese (4,547), ranking second.

Nuffic spokesperson Anne Lutgerink says Italians are more studying abroad more often anyway. “That’s partially due to the bad economy in Italy.” On the other hand, the number of Chinese students in the western world has stopped growing in the past few years. Nuffic says the Chinese government is investing more in its own education, and students are more likely to choose study programmes elsewhere in Asia. There are also simply fewer Chinese students: China’s one-child policy has led to a decrease of the total number of Chinese high school students. 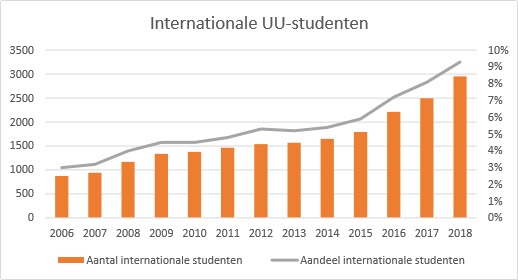